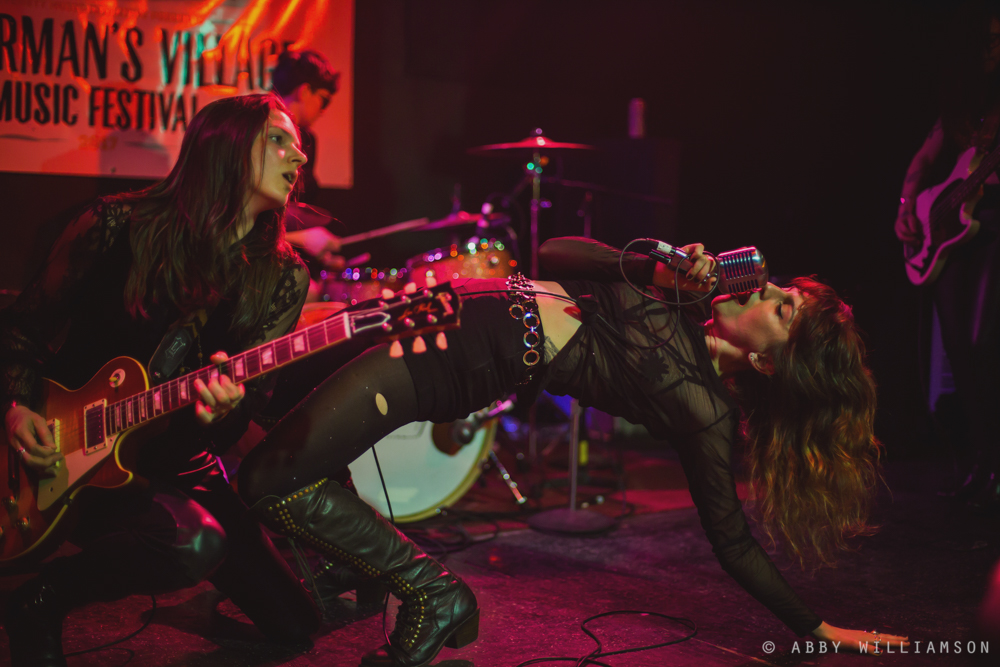 As someone who calls herself a festival veteran, I’m ashamed to say that 2017 was the first year I got to experience Everett’s Fisherman’s Village Music Fest. While it’s a tragedy that I’ve missed years past, this was a pretty good year to start with – with the likes of Cataldo, The Cave Singers, My Goodness, Sassyblack, Courtney Marie Andrews, and our favorites Thunderpussy rounding out the lineup.

Friday night at Tony V’s Garage was quite the party. I arrived a bit late, so Everett natives Tellers was first on my list – whose energetic indie rock was a perfect way to open the night. They were a tasty appetizer for what turned out to be a fabulous five-course meal. 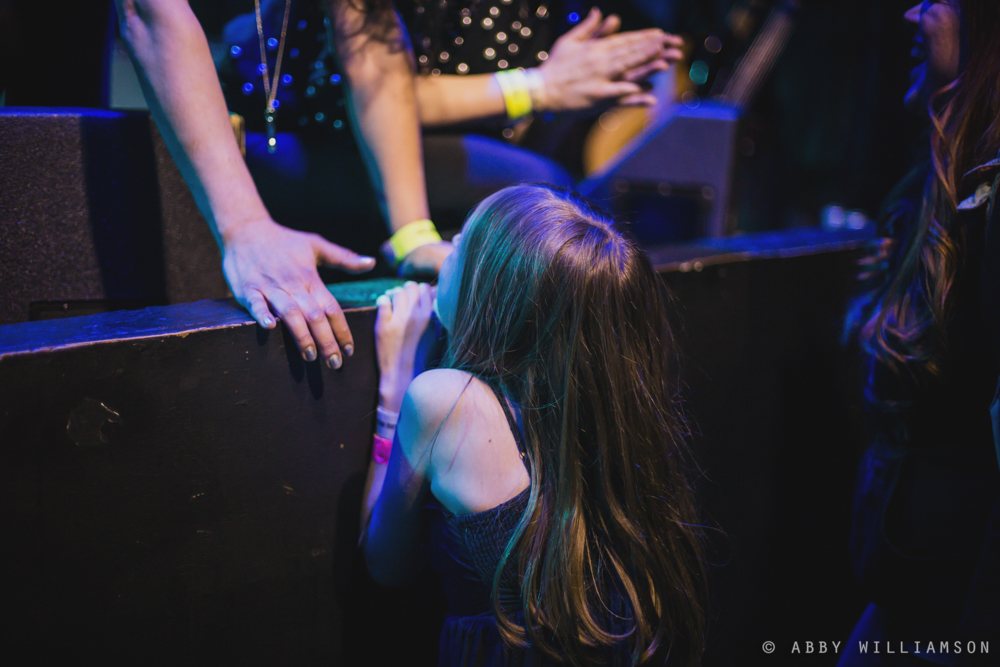 The second course was Wild Powwers – who had a bit more punch and a wind machine like no other. Drummer Lupe Flores’ wild locks were like the fourth band member – the perfect pairing to her ferocious drumming. Their set was peppered with new songs, but we got just the right balance of new and old. Standing right up front at Wild Powwers’ set was definitely the most enthusiastic fan – a young girl that didn’t look to be more than 10 years old. She threw up rock hands and cheered out “WILD POWWERS!” It was her first rock show, and she loved every minute of it.

How cute is that?! It just goes to show you that representation matters, and when little girls get to see people that look like 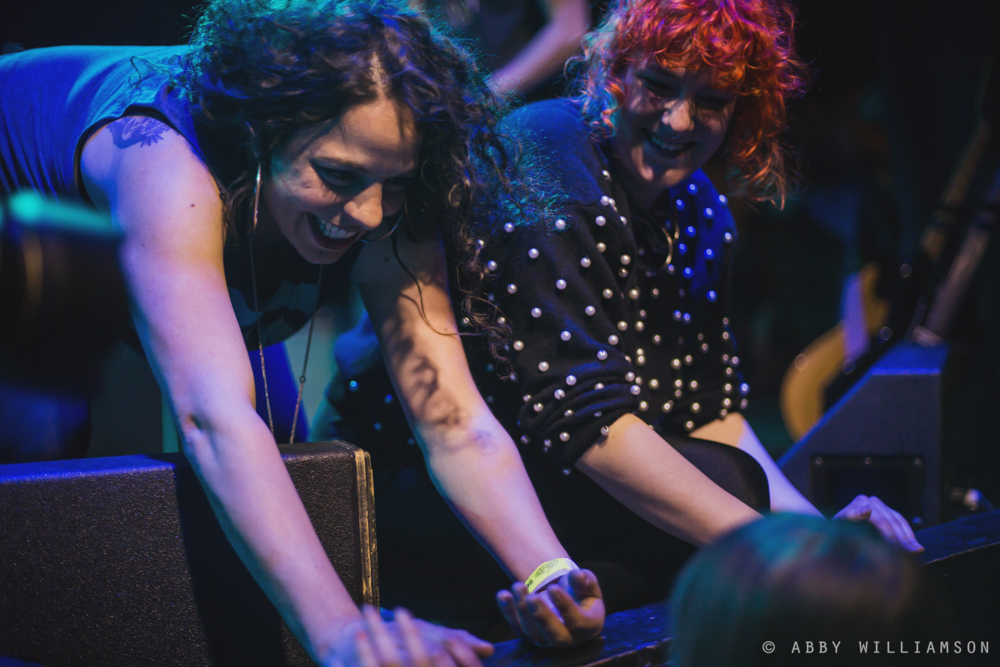 them kicking ass at music, it matters.

Moving on, Moondog Matinee was up next – and this band blew all expectations out of the water. They walked out with cowboy hats, western shirts, and bedazzled leather jackets – which makes sense since they hail from Reno, Nevada – but they channeled the classic bluesy rock and roll bands from the 70s. At first it didn’t make sense but quickly you were just lost in their stage presence. Their website describes Moondog Matinee as “pseudo-sexual anarchy with an inkling of lustful innocence,” and I couldn’t even try to put it any better, so I won’t.

The fourth and penultimate course for the evening brought us back to Seattle bands with My Goodness. They’ve had a killer year – after adding Kyle Veazey and Josh Starkel of Duke Evers to their already incomparable lineup of Joel Schneider and Andy Lum, releasing a new EP, playing Deck the Hall Ball, and headlining the inaugural weekend of season four of Band in Seattle.  The new sound they’ve been able to achieve with twice as many members is a great progression from what their sound was before, and the live show proves that even more.

Closing out the night was Thunderpussy – and honestly we’ve written about them so many times, do we need to reiterate it again? They were amazing. Of course they were. The multicolored lights of Tony V’s Garage lit up the stage perfectly to match the energy that this quartet has mastered. At one point the crowd got a bit too rowdy for frontwoman Molly Sides’ liking, and as the mosh pit grew, she stared out at whomever started it and just threw up a middle finger. It was great. It was magical. I vote Thunderpussy closes out every festival from now on. Can we start a change.org petition to make that happen?

The next was a full day of rock and roll and some nostalgia – but not too much. Just enough – and by just enough I mean a set of solo songs from local music veteran John Van Deusen (formerly of the Lonely Forest). For this writer, it was a real treat to see him play some old songs, but also some new equally as beautiful ones – which we can expect very soon to be released on more than one record. Multiple albums from John Van Deusen? Yes, please.

More nostalgia was coming our way at the Everett Performing Arts Center, but this time from Jenn Champion, formerly known as S (Jenn Ghetto) and also formerly of Carissa’s Weird. The room was quite large, but the melodic moody indie pop actually worked quite well for the attentive audience in the awkwardly huge arena with the theater chairs (it felt like I was about to see a high school performance of Hello, Dolly!)

Also at Everett Performing Arts Center that day was Cataldo, who you might recognize from every other lineup for every other festival happening in town this year. I mean, Eric Anderson is a busy, busy man. But it’s worth it – because Cataldo’s new album Keepers (out very VERY soon) is really great. It’s really good guys. You should be excited, so get your butt out to any of the other festivals in town and see Cataldo.

Back at Tony V’s Garage, Crystal Desert started the afternoon early – and in epic fashion. These guys are going places. We’re calling it right now. It’s grungy punk rock at it’s finest, and we can’t wait to see what these three are going to do next. The only way their set would have been better would have been if it was later in the day (though luckily they played a set at Anchor Pub the next evening).

As the sun began to set – Portland’s Cardioid hit the stage with some sweet, sweet indie pop. It was psychedelic at times, and funky at others (“Prickly Parts” is one of the catchiest songs I’ve heard in a long time – check it out). It was an evening dance party, which was a perfect way to warm up the evening, which definitely escalated after that. Sloucher was next with their smooth retro-tinged indie rock, that kind that provokes memories of other bands from years – even decades back – but not so much where you can specifically pinpoint it.

Everett favorites Fauna Shade kept the night going from there – with singer Scotty Smith sporting four different pieces of clothing touting Everett institutions. Two t-shirts, one sweatshirt, and a pair of sweatpants. Dude just really loves Everett. After this weekend, we can see why – the music scene up there is killing it.

Now we take you on a quick detour over to Anchor Pub for Sassyblack – for two reasons. One, I’ve never seen her solo stuff before now, and I hadn’t been to any sets at Anchor Pub yet. We had three people at the festival covering (as you can see from the impressive gallery below), but I wasn’t able to attend Sunday’s festivities, so I had to get in as much as I could Saturday night. Sassyblack was a breath of fresh air – she mixed up the songs with what she called comedy for “awkward Aunties with fanny packs” (she was sporting a fanny pack, by the way). Her psych hip-hop was sprinkled with references that thankfully most people got (including a reference to Bobby Brown, and not the makeup artist).

To end the evening, Tony V’s closed the night with the incomparable energy of Naked Giants. I swear, these three are actual energizer bunnies. The crowd was excited, tired, sweaty, and absolutely loving this trio of young punks. They played through a lot of the songs we know them best for (i.e. “Ya Ya,” “Pyramids”) but it was also obvious that they’ve been hard at work writing brand new songs. And one of those songs seemed to go on for like 9 minutes – seriously. An opus – of sorts. It was the perfect way to close out Saturday night, and to close out my first Fisherman’s Village Festival experience.

I’ll definitely be back next year – as should you. Now please enjoy this giant gallery from all three days.

Abby Williamson is a photographer, writer, and video blogger with a passion for live music – especially the local scene. She recently moved to Seattle after commuting from Gig Harbor for shows an average of once a week for five years, so she’s happy to not have to drive as much and photograph even more concerts! When she’s not elbowing her way up to the front row at a show or sorting through thousands of photos of those shows, Abby also does freelance wedding photography, all the while cultivating a decent-sized following on YouTube. Abby has contributed to several music blogs over the last five years (and she’s really excited to join the SMI team!), and has been published in at least one album booklet for the band, Someone Still Loves You Boris Yeltsin. She would like people to know that while music photography and writing is a huge passion in her life – she is a fan first, photographer second.
Related ItemsAbby WilliamsoncardioidCataldoCrystal DesertEverett Music InitiativeFauna ShadeFeatureFestivalFisherman's Village Music FestivalJake Hansonjenn championjohn van deusenMoondog MatineeMy GoodnessNail HousesNaked GiantsReviewRon Reyesronnel reyessassy blackSLOUCHERTellersThe Anchor PubThe Cave SingersThunderpussyWild PowwerswinterlingsWoodshed
← Previous Story The XX Might Be Too Cool
Next Story → Real Event throws first bash in Everett