By Christine Mitchell on May 2, 2017@Housetornado37 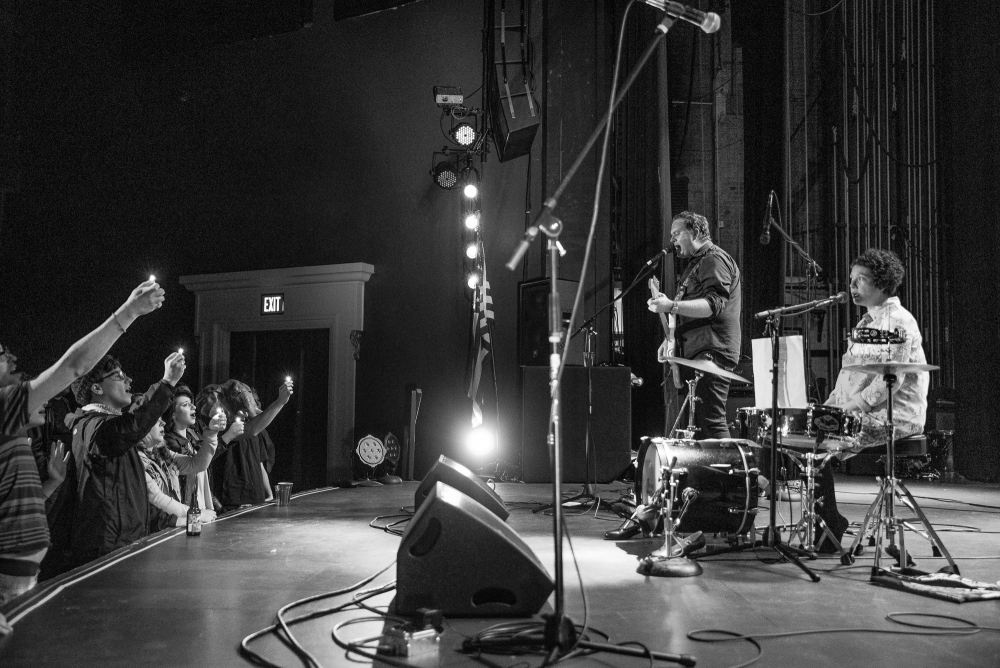 The Historic Everett Theatre is no stranger to PNW music, having played host to the main stage for the Fisherman’s Village Music Festival for a couple of years. Indeed, its century and more worth of history from vaudeville to musicals, from silver screen blockbusters to legacy performers, was outlined in superb detail during Steve Burtrand’s keynote talk at the first ever Real Event, put on by Dada Fructose (aka Alexander Vincini and Adam Bagley). The speech was a prelude to an excellent night of local music in the gorgeous venue. None of the bands playing had ever had the opportunity to grace such a swank stage (their normal haunt being The Anchor Pub), but each shined in their own way as they were bathed in banks of pro lighting, fog rigs, and individualized projections created by Vincini. One thing is becoming clear as the Everett scene evolves: its supporters are fierce and tenacious. There are no “regular” shows in Everett. Each one is dearly loved and unique.

Sleepwell Citizen is a stalwart Everett band that has weathered the years (and a name change), and they started the musical portion of the evening off with a set of familiar, well-executed originals. Their post-prog-grunge sound would pair nicely with Wild Powwers’ 90’s acid-drenched music (indeed, both bands played Fisherman’s Village last month). Ty, Evan, and Joe have played less frequently lately than they have in the past, but you couldn’t tell: the trio’s performance seemed as effortless as it was intricate. Tyson Lee’s hair flew (when he didn’t have his man-bun in) along with the flying fingers on his fretboard, Evan Smith’s dark-chocolate bass playing was pleasingly chunky and mathy, and Joe Jarvis’ made liberal use of his extensive drum kit. It was an absolute joy to see this band, who have played in many hole in the wall joints along I-5, play in such a beautiful, well-lit setting. It was a little bit like church…only kickass.

The Moon Is Flat turned down the lighting setup and made liberal use of the fog machine for their part of the evening. Those in attendance decided to kick the churchy vibe, get out of their seats, and cozy on up to the edge of the stage. TMIF proceeded to crawl into everyone’s brains via a series of lengthy psych-jams that majestically oozed into one another. The crowd accepted and embraced this hive-mind-like takeover, swaying to the rhythm and swinging heads during the crunchiest parts of songs. Kirk Rutherford and Aaron Ljunghammar’s guitars laid down textures and colors until Vincini told Rutherford to wrap it up (time not being a dimension that The Moon Is Flat takes much heed of).

The Co Founder was up next. Hailing from Bellingham, this poppy trio was the only non-Everett band. They were well received nonetheless, mostly due to their slick-sounding songs that were reminiscent of Anacortes’ much loved The Lonely Forest, who sadly are no more. The Co Founder might be something for those fans to glom on to. Their hooks were shiny and made folks bob their heads. Songs like “Obsessed” and “Balanced,” both off their latest release, phd, were representative of their sound.

Closing out the night were Everett’s sweethearts, Oliver Elf Army. Let it be known that if you don’t like this band, well . . . Everett doesn’t like you. The last sentence may or may not be true, but those inside the Historic Everett Theatre during OEA’s set had definitely drunk and were enjoying the most delicious and lovely Kool-Aid. And it was wonderful to behold.

Mary and Martin Adams again opted to bring Henry J. Yarsinske of The Stereo Wire on board as bassist, a move which affords them a more lush soundscape than their usual drum and guitar duo. It was a wise choice for the venue; OEA’s sound filled the auditorium and it sounded amazing. The band played songs spanning their catalog, including one written about the cult TV show Freaks & Geeks as well as the entirety of their two latest EPs, The Mystery of The Booty Warrior and Telescope. People danced (including this author). They pounded the stage in time to the music. During the majestic yet twisted “Black Nikes,” folks brought out actual lighters (iPhone flashlights be damned) and waved them in unison, singing along. The band even got to play their first encore because, as they explained, encores don’t really work at The Anchor (where there is no backstage to hide). They ended the night with a song they created for the Live in Everett podcast, called (of course) “Live In Everett,” which name checked everything from Fauna Shade and Boeing to the Silvertips. Afterward, many followed the Real Event elephant (because OF COURSE there was someone dressed as an elephant) to The Anchor for an afterparty.

Christine Mitchell has been poring over album liner notes pretty much since she acquired the skill of reading, and figured out the basic structure of rock songs at an early age. Whether it’s the needle popping into the first groove of the record, the beeps that signal the beginning (or end) of a cassette tape, or digital numbers ticking off the seconds from zero, music brings Christine happiness, ponderous thought, opportunities for almost scientific study, and sometimes a few tears. When she started attending live shows two decades ago, a whole new piece of the puzzle clicked in and she has been hooked ever since.
Related ItemsChristine MitchellFeatureOliver Elf ArmyReal EventRon ReyesSleepwell CitizenThe Co FounderThe Historic Everett TheatreThe Moon Is Flat
← Previous Story Fisherman’s Village 2017 Proves That Everett’s Got It Going On
Next Story → PJ Harvey marches into WaMu