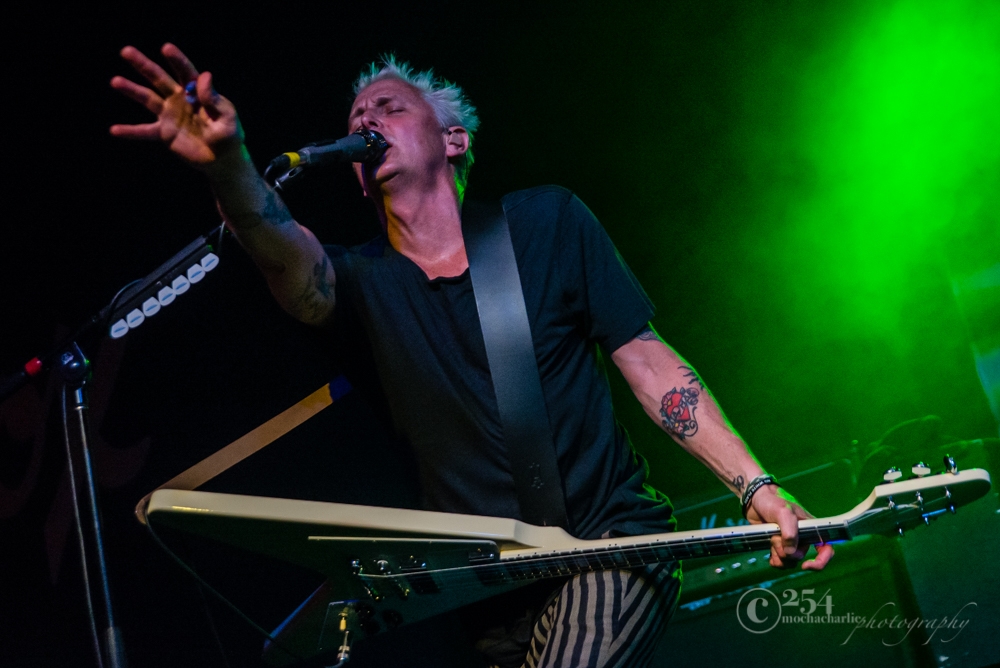 The fifteenth year of Flight To Mars‘ Crohn’s and Colitis benefit, featuring Mike McCready (Pearl Jam, Temple of The Dog, Mad Season) and Mike Musburger (Love Battery, The Fastbacks, The Posies), was, simply put, stunning. The two sold out shows raised money for Camp Oasis, a program for kids with IBD. And what a rocking way to do it. Flight To Mars plays covers of hard rocking seventies band UFO‘s heavy tunes, and does it very well. Fans travel from all over the country each year to the benefit at The Showbox. McCready asked his “favorite new band,” Thunderpussy, to open on both nights, a move that paid off in spades. It was truly a match made in heaven.

Thunderpussy may be Seattle’s favorite band right now, and at the moment they seem to be taking the crown for hardest working, as well. They also took part in the Upstream Music Fest, performing a total of four times in three days. Thunderpussy is also riding high off of the release of their first single, “Velvet Noose,” available on iTunes and also on vinyl via McCready’s HockeyTalkter Records. Their performance at the FTM benefit showed no sign of weariness, however. Quite the opposite, in fact. The band, decked out in pink fringe and sequins, was on fire both nights. Frontwoman Molly Sides sounded impeccable. Drummer Ruby Dunphy was hard hitting…she’s gonna be on a list somewhere, soon. In addition to their much-loved originals (when their LP comes out it’s gonna sound like a greatest hits), Thunderpussy played a cover of Iggy Pop’s “Search and Destroy” as well as an impeccable version of Thin Lizzy’s “The Boys Are Back In Town.” During the latter, McCready and Flight To Mars’ guitarist Tim DiJulio hit the stage with the band to play alongside Whitney Petty and bassist Leah Julius and fill out “Boys'” gorgeous, multilayered guitar riff. McCready stuck around to play on “Velvet Noose” (he played on the single and also produced the recording). Night two of the gals’ set saw the Pussyfoot dancers come onstage for the requisite “Welcome to the Disco” and “Thunderpussy,” complete with chorus line kicking. The crowd wasn’t just warmed up; they were sizzling.

You don’t have to be a Pearl Jam fan to appreciate Flight To Mars (though of course, it doesn’t hurt!). When the band kicks into tracks like “Rock Bottom” or “Doctor Doctor,” all you need to be is a fan of rock ‘n’ roll. Even more, it’s simply enthralling to watch the members FTM so thoroughly enjoying themselves. DiJulio repeatedly gave emphatic guitar solos, windmilling, slinging, and rawk-facing his way through the set. Bassist Gary Westlake was a bit more subdued, choosing to act as a supplement to DiJulio and McCready, often kneeling next to them or leaning against them trading riffs (and looking for all the world like Neil Young). Meanwhile, Musburger was almost completely shrouded in drums…and made use of all of them. From time to time his grin could be seen peeking out from within the drum kit, and from time to time he made use of the gong located behind him. Because what are covers of seventies rock ‘n’ roll without a little camp?

Speaking of campiness, McCready sported a couple of Flying V Gibson guitars, which he used to great effect, both in his playing and in his exaggerated rock poses. The crowd ate up every second, losing it every time McCready pointed out over their heads or snapped a Polaroid picture. Lead singer Paul Passereli delivered lyrics in his gravelly register, holding his fringed arms aloft like wings and at times holding the entire mic stand out over the crowd so that they could sing along.

The second half of the set for both nights featured covers of various much loved classic rock songs, including two more Thin Lizzy greats: “Cowboy Song” and “Jailbreak.” It must be said that during night two’s FTM set, the members of Thunderpussy hooted, hollered, and danced their approval from various locations from the pit, interfacing with McCready in particular, who used Petty’s beer bottle during a solo. Petty returned to the stage to engage in a raucous cover of AC/DC’s “Let There Be Rock,” at one point even Angusing it across the stage. She’s a full-fledged guitar god now, hair and fingers a-flyin.’ Petty, DiJulio, and McCready took turns riffing with each other. The night ended with Led Zeppelin’s “Thank You,” which was appropriate, yet still heavy. Another year of Flight To Mars is in the books, and it was a red letter one, to be sure.

The gallery below contains images from both nights starting with night one.

Christine Mitchell has been poring over album liner notes pretty much since she acquired the skill of reading, and figured out the basic structure of rock songs at an early age. Whether it’s the needle popping into the first groove of the record, the beeps that signal the beginning (or end) of a cassette tape, or digital numbers ticking off the seconds from zero, music brings Christine happiness, ponderous thought, opportunities for almost scientific study, and sometimes a few tears. When she started attending live shows two decades ago, a whole new piece of the puzzle clicked in and she has been hooked ever since.
Related ItemsChristine MitchellFeatureFlight to MarsMike McCreadyMocha CharlieShowbox MarketThe ShowboxThunderpussyWhitney Petty
← Previous Story PHOTOS: Upstream Day Two
Next Story → Upstream Fest + Summit Recap