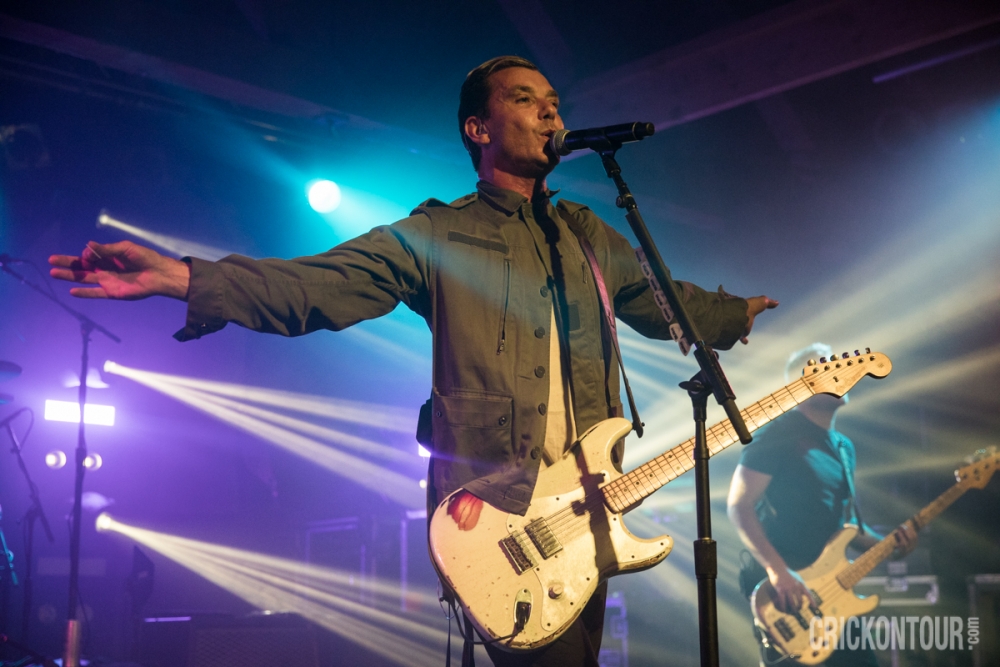 It has been a long time since I have seen Bush perform. The sold out crowd tonight at Showbox Sodo is here to witness the British rock bands return to Seattle. The lights dim, and screams of anticipation fill the venue as vocalist/guitarist Gavin Rossdale, guitarist Chris Traynor, bassist Cory Britz, and drummer Robin Goodridge break into their smash hit “Everything Zen.”

Bush are touring in support of their latest release, Black and White Rainbows. It feels like hit after hit is all we have ever known from them. As one of the most successful rock bands from the 90’s, they sure know how to write hooks and songs that deliver. While the band took a long hiatus from 2003 – 2010, they are on fire tonight. Rossdale could barely stay still, interacting with the adoring crowd at every possible moment. He and his band mates seemed to truly enjoy the overly excited fans screaming and singing along with them.

“All the places we play in the world we love to play here. It is incredible to play here in Seattle,” said Rossdale. He paid homage to Chris Cornell, and brought up all the shows they have played with Soundgarden over the years. “It is such a divided world and it is great to come around to see the power of music, and how it connects us all. Thank you all for coming out tonight.” They then played “People That We Love” as a tribute to Cornell.

Another notable highlight came when Bush surprised everyone with a cover of R.E.M’s “The One I Love” with a interlude of “Black Hole Sun,” mixed in again for Seattle and Cornell. You could feel the love in the room, the heartfelt gratitude, and the profound pain that everyone present felt from such an unexpected loss to the music community.

Bush closed with “Glycerine” and “Comedown,” though the room definitely wanted more. It has been a tough few weeks for all of the musical community in the world, and especially for Seattle. This night was a reminder of the healing effects of music and how it unites us all in these challenging times. We were all one, and for a brief moment we got to put aside our troubles and celebrate music.

Machine Head
The One I Love
Glycerine
Comedown

Alex Crick is a Seattle based freelance photographer specializing in music photography. His interest in photography began as a school project in the early-90′s, when he also attended many live music shows. Eventually, he combined these two interests by conveying the power and excitement of live music through the eye of the camera. Over the years, he’s traveled all over the country photographing live musical acts. You can find samples of his work in SPIN, Billboard, Esquire. View his work here
Related ItemsAlex CrickBushFeatureNeil Lim SangShowbox SodoThe Kickback
← Previous Story Actionesse Rolls Out ‘Fortune’
Next Story → Seattle Secret Shows Sounds off @ SONOS