By Christine Mitchell on June 8, 2017@Housetornado37 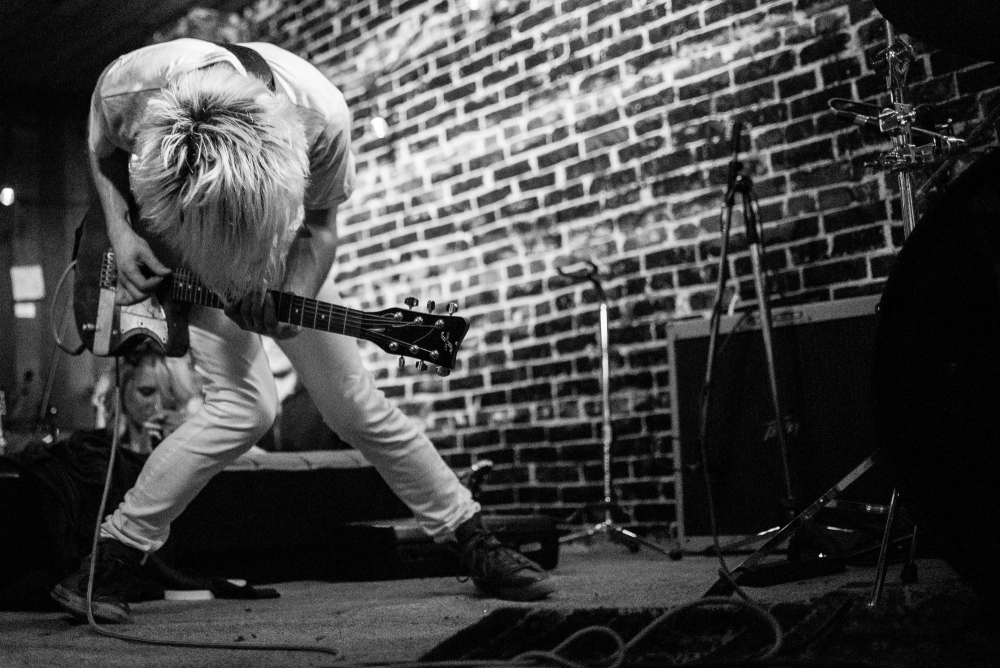 Crystal Desert at The Anchor Pub (Photo by Christine Mitchell)

It’s a little bit gut-wrenching that the defining moment of Crystal Desert’s career, their apex, was this: they stripped off their black clothing, revealing ramients of white, announced that they were breaking up, and then played the longest, most blistering set of their existence. They transformed into three Elijahs, caught up in a whirlwind of their own creation, and at the end, Crystal Desert ceased to exist. Those left in the wake of this, which is to say the large crowd amassed at the Anchor Pub (who were “summoned” by the band and told to wear black), were left dazed and emotionally strung out. Did that really just happen? Yeah. It did.

The band curated a staggering lineup for the event. It was almost like a salve for the impending hurt: here, love these bands in our absence, they deserve it. And they do. Sleepover Club plays ratty, bratty, in-your-face punk. They recently opened for Mommy Long Legs, which is pretty much a perfect pairing. The crowd was extremely receptive to their feminist rants like “Single Dads,” “Guns,” and “Wannabe Slut,” responding in kind with a dancy sort of mosh pit. Sleepover Club’s cathartic, screamy set was a great way to kick off the evening.

Oliver Elf Army took the black dress code very seriously, with all three members sporting goth makeup, drummer Mary Adams’ head covered with a lace veil and bassist Henry J. Yarsinske looking like a towering harbringer of death. Their funerary appearance was complemented with projected visuals courtesy of Dada Fructose. OEA is, simply put, one of the cornerstones of the Everett scene at this point. When they play, it’s like a collective hug, with songs like “Electric Snare,” “Booty Warrior,” and “Black Nikes” reeling out like one greatest hit after the other. Their impeccable pop sensibility just gets better and better with every show.

Oh, Actionesse. Everett wishes that they could claim you as their own. Actionesse definitely won over the room with an energetic performance that ignited a frenzy in the crowd. Whatever the band has been doing in order to prepare for their West Coast tour that starts this week, whether it’s neck calisthenics or just plain practicing…it’s working. Their set was loud, resplendent with horns, …and it was incredible. The way that drummer Jimmy Colven and bassist Paddy Moran are just in the pocket while frontman Ian Reed and lead guitarist Philip Kaltenbach just wail away, meeedly-meeedly-meee… Things got especially apoplectic when Crystal Desert bassist Christian Smith came onstage to helm the vocals on a cover of System of a Down’s “Suite P.” The entire crowd gleefully sang along. The set ended with the ever-epic “Shark Hunting,” and, while it was obvious that 98% of the room had never heard of Actionesse before, they were 100% down with them. Stop by anytime, guys.

And now we come to the aforementioned sublime moment. Hooded harbringer Yarsinske consecrated the stage with a censer. Ryan Alexander, Christian Smith, and Joshua Ihler, turned angels in white in a sea of black clothing, folded into their first song, a monumental seven or eight minute monster titled “Epitaph.” The room was basking in the afterglow of its fervor when Alexander informed everyone that this would be Crystal Desert’s last show. This prompted exclamations of disbelief until Smith quieted them, stating “It’s real. The project has been terminated.”

With that, the band proceeded to work through an extensive setlist that canvassed their catalogue in (mostly) chronological order and included a cover of David Bowie’s “I’m Afraid of Americans.” For an outfit that has always seemed to perform every show as if it’s their last, their final outing was telling in its emotional cues: the eye contact alone was enough to make you want to cry. Each band member pointedly watched the others, recording and filing moments away. They also connected with the crowd, surveying faces, ostensibly feeling the gravity of the occasion. The world outside stopped. Underagers congregated on the sidewalk outside the venue, having been unceremoniously kicked out at 11PM right before Crystal Desert went on, and included all three members of Sleepover Club. Alexander pointed this out and voiced a plea for a truly all-ages venue in town.

Crystal Desert closed their set with “Black Summer,” its nostalgic, existentialist themes an appropriate conclusion. And though people were screaming for an encore, there was none. There were sweaty hugs and teary eyes as people filtered out of the bar. Those who stuck around danced to the gothic stylings compiled by DJ goawaysun, whose selection of tracks (Siouxsie and The Banshees, Ministry, Nine Inch Nails) had kept the mood gloomy all night. Oliver Elf Army held the first public showing of their video for “Black Nikes,” and many of the stragglers were treated to seeing themselves on the big screen. A parting image from the video: Crystal Desert’s Alexander frozen in a death rictus, his bleached shock of hair instantly recognizable even though a hand obscures his face, with an overlay of stars.

Christine Mitchell has been poring over album liner notes pretty much since she acquired the skill of reading, and figured out the basic structure of rock songs at an early age. Whether it’s the needle popping into the first groove of the record, the beeps that signal the beginning (or end) of a cassette tape, or digital numbers ticking off the seconds from zero, music brings Christine happiness, ponderous thought, opportunities for almost scientific study, and sometimes a few tears. When she started attending live shows two decades ago, a whole new piece of the puzzle clicked in and she has been hooked ever since.
Related ItemsActionesseChristine MitchellCrystal DesertFeaturegoawaysunOliver Elf ArmySleepover ClubThe Anchor Pub
← Previous Story Seattle Secret Shows Sounds off @ SONOS
Next Story → John Mellencamp Opens Marymoor Concert Season