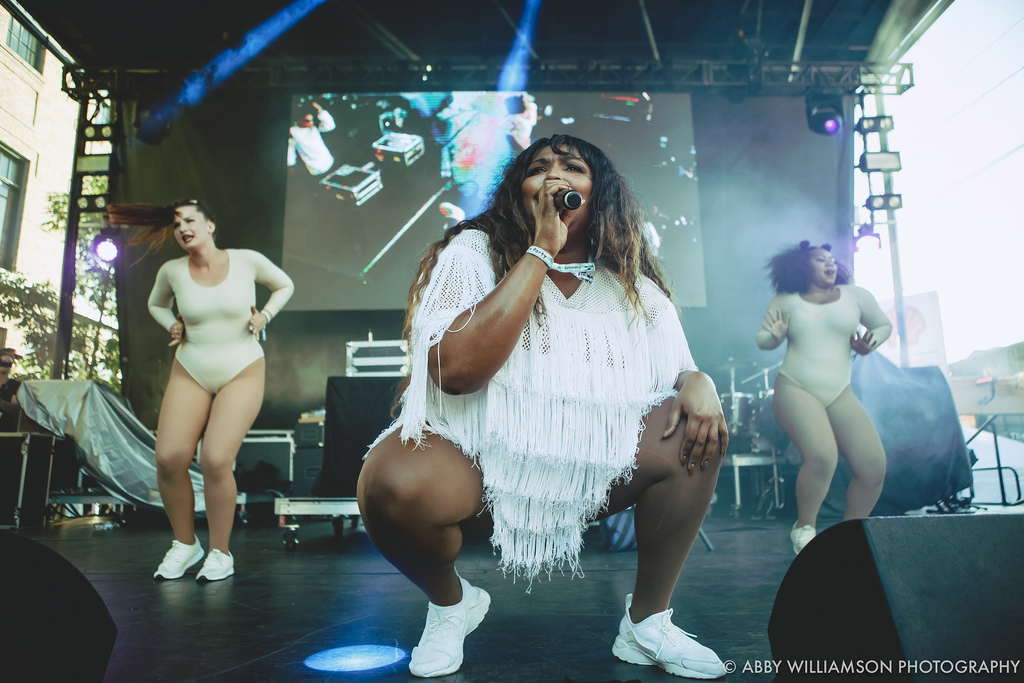 Aaaand we’re back. Saturday of Capitol Hill Block Party was a mixed bag. The highs were very high and the lows were a bunch of bored boys lamenting about traveling too much.

The small stages were where it was at though. Prom Queen’s dark doom wop at Neumos, Biddadat’s funky pop rock at Barboza, and Fucked and Bound’s sweaty thrashy mosh pit at the Cha Cha Lounge were highlights of the day. Prom Queen was flanked by her two statuesque back-up singers Evonne and Joelle, whose matching fluorescent wigs and gowns practically glowed, and the somber yet sassy songs hit just the right spot.

I only ventured to Cha Cha once in the whole weekend, mainly because the capacity is so low I couldn’t get inside even if I tried (which I did, twice). But I did manage to catch a fleeting couple of songs from Fucked and Bound, a project consisting of members of He Whose Ox Is Gored, Witch Ripper, and Cascabel. Let me tell you – they live up to their name. It was loud, sweat-soaked, and visceral. And I thought He Whose Ox Is Gored was loud, but singer Lisa Mungo has a lot of damn power: one band can’t contain it. It was intense, but if you want to really feel something, check them out when you can.

Like I said before, there were hits and misses, and the main stage was proof of that. We got local favs Cosmos and Manatee Commune (with inflatable manatees!) early on in the day, but the vibe was instantly shot when the sad boys of Whitney got on stage. I’m sure your music is great, but starting off a set with telling the whole crowd that you’re getting over a cold, you flew in this morning, and you have to fly out later that night with the look of exhaustion and defeat isn’t the best way to kick off a show. We all know being a musician isn’t always glamorous, but at least fake being excited. People paid you to be there and to see you. End rant.

Thankfully Lizzo was there to save the day and twerk her way into everyone’s hearts. Not only can Lizzo rap like nobody’s business, but she has a damn good singing voice and hips that could battle Shakira’s. She’s body positive, badass, and so darn adorable. I love her. You should love her. “Good As Hell” is a perfect anthem when you’re having a bad day and need to feel less like death. I mean, she brought a random fan up on stage and dance with her, and the girl straight up twerked on Lizzo. I’m sure that girl wasn’t expecting to have that experience that day. But it’s a memory that will last her a lifetime.

The Vera Stage wasn’t without its hits – the nicest guys in town a.k.a. Naked Giants killed it as per usual, drawing a crowd that was young, enthusiastic, and just as nice as the boys themselves. Those are the kinds of mosh pits I like, ones where people think about others as well as themselves. In fact, Vera had the nicest lil’ crowd all weekend (and I say “lil’” as a term of endearment, not as one of size, because it was definitely not little).

Following Naked Giants, Magic Giant was a huge surprise. Again, another band I knew nothing about but oh boy were they fun. Jumping into the crowd in the first song, synchronized dance moves, and generally exuberant and catchy songs made for a fantastic set. They had so much joy on stage that it was infectious, and it was impossible not to smile. Magic Giant just got added to the 107.7 The End Summer Camp lineup, so if you missed them at Block Party, check them out there. You won’t regret it.

Abby Williamson is a photographer, writer, and video blogger with a passion for live music – especially the local scene. She recently moved to Seattle after commuting from Gig Harbor for shows an average of once a week for five years, so she’s happy to not have to drive as much and photograph even more concerts! When she’s not elbowing her way up to the front row at a show or sorting through thousands of photos of those shows, Abby also does freelance wedding photography, all the while cultivating a decent-sized following on YouTube. Abby has contributed to several music blogs over the last five years (and she’s really excited to join the SMI team!), and has been published in at least one album booklet for the band, Someone Still Loves You Boris Yeltsin. She would like people to know that while music photography and writing is a huge passion in her life – she is a fan first, photographer second.
Related ItemsAbby Williamsonbiddadatcapitol hillCapitol Hill Block Partycha cha loungeCosmosFeatureFestivalfucked and boundLizzoLord HuronMagic GiantManatee CommuneNaked GiantsNeumosProm Queenwhitney
← Previous Story Capitol Hill Block Party 2017 | Part 1: Delightfully Unhinged
Next Story → Green Day Goes Big For Revolution Radio Tour