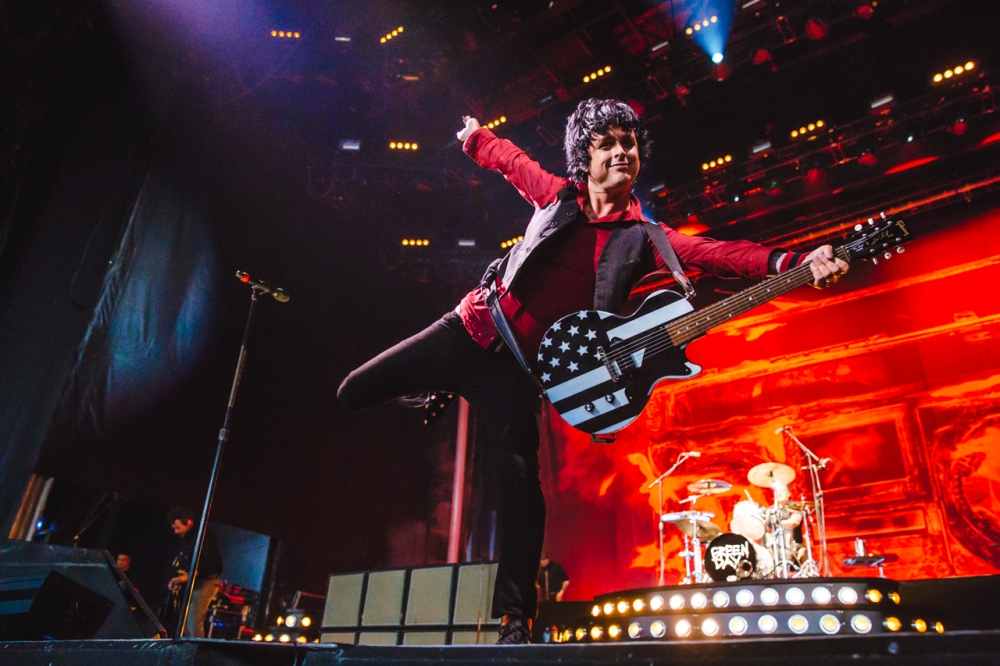 Explosive pyrotechnics couldn’t compete with the excitement of the crowd for the opening night of the second US leg of Green Day’s Revolution Radio Tour. It was a night of alt-radio staples perfectly executed to the tune of social consciousness and political conviction. And if you’re even a minor fan of the veteran punk band’s catalog, it’s an understatement to say it’s worth going to this show.

Not even 90-degree heat could stop the dedicated fans from lining up three hours early for the show at Auburn’s White River Amphitheatre. Once they finally poured through the gates, there was literal running for the best spot on the free-for-all lawn, while the reserved seats didn’t really fill in until Green Day hit the stage.

The night opened with breakthrough British rock band Catfish and the Bottlemen, who seemed to have brought out quite a few of their own rabid fans. Their 30-minute set consisted of only six tracks that featured thrashing guitar work and distinctly heavy bass. Lead singer/guitarist Ryan Evan “Van” McCann tore into each new track with unabashed fervor as the crowd sang and pumped their fists along.

For Green Day’s turn, the fans sang through recorded versions of Queen’s “Bohemian Rhapsody” and Ramones’ “Blitzkrieg Bop” – complete with pink bunny-suited hype man – before the band hit the stage, but when they finally did with “Know Your Enemy,” it was no holds barred. It’s rare to see a crowd this united in their appreciation and a band this fervent in participation, but Green Day made it happen.

From the get go on track one, their connection – especially Billie Joe Armstrong’s – was unbeatable. They brought fans on stage to sing during multiple tracks and then made sure the mosh pit caught them for an epic stage dive, extended their typically short tracks to allow for Armstrong’s political soliloquies, and repeatedly delighted the longtime fans with classic tracks like “Holiday” and “When I Come Around.”

There was a touching dedication of “Boulevard of Broken Dreams” to the recently-passed Chester Bennington (Linkin Park). An acoustic first verse was accompanied by Armstrong’s statement of “Just remember sometimes life is a mess and it ain’t pretty but it is beautiful sometimes,” and a crowd full of lit-up cell phones and lighters while Armstrong kneeled and let the crowd’s singing wash over the stage. The rest of the set was a thrasher of pyrotechnics; flame cannons that you could feel the heat from at the back of the venue.

This mix of sentimentality and sheer revolution is Green Day’s thing, though, and exactly what the fans came to be a part of. Stacked with favorites and more songs than you thought you knew, Green Day’s live show is a must-see, must-hear, must-sing.