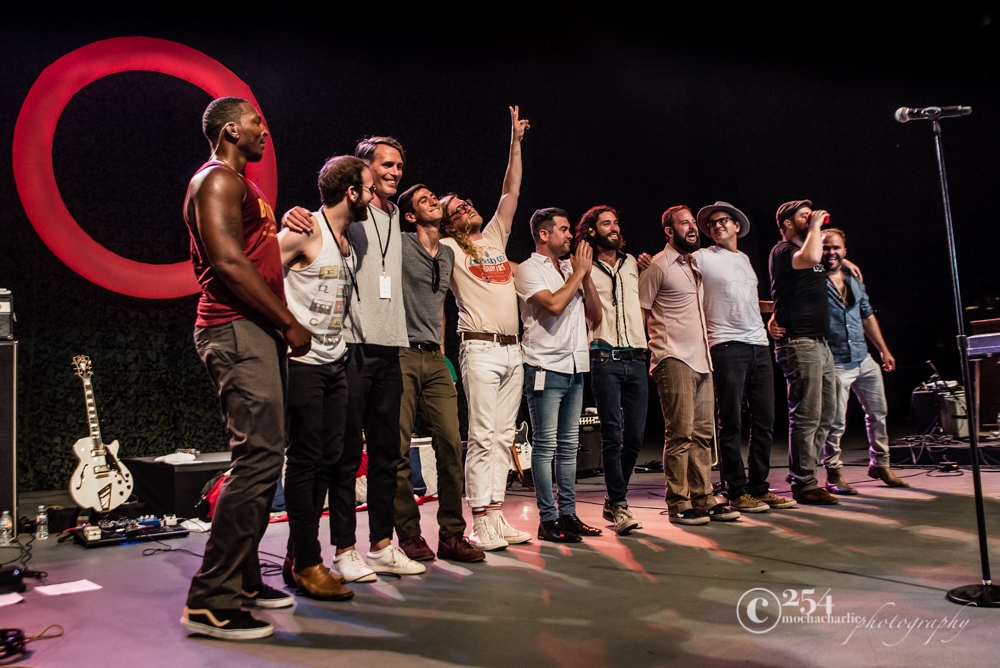 Crowds are never bored or disappointed when they go to see Allen Stone live. He continues to exude stellar musical talent, emotes a genuine sense of human kindness on and off stage, and is always surrounding himself with positive, happy people to extend even more musical talents at his shows. Stone may have been the only musician on the bill for last week’s sold out show at Chateau Ste Michelle Winery, but he was in no way alone on the stage.

Stone’s band consisted of Jason Holt (drums), Tyler Carroll (bass), Trevor Larkin (guitar), and Steve Watkins (keys), along with Ari Cohn (sax), and Evan Oberla (trombone), who are both members of Brass Lightning, based out of New Orleans. They all played together seamlessly, constantly smiling at each other, laughing, and showing off their skills (some even dance!) at every turn. He and his band have made many musician friends over the years, and when the occasion calls for it, they come running when Stone asks if they’d like to join him on stage. For this show, he invited Tingsek, Joey Diosk and Theo Katzman to sing a few of their own tunes as well as had them on stage for numerous songs, rounding out some stellar backup vocal performances throughout the evening. With the entire stage filled with friends, the energy was electric, filled with heart and soul, and, if there had been a roof above the field holding well over four thousand fans, they would have blown it off with their talents. For the last few songs of the night, Stone also invited two past band members to the stage, Brent Rusinow (bass), and Greg Ehrlich (keys), and when they took to their instruments, it was if they had never left. Joy, laughter, and exceptional talent. That’s what fans continue to see and hear when Allen Stone and friends are on stage.

Stone is continuing to make his mark in the growing music community, here and around the world. After touring extensively over the last few years, he has spent a bit more time closer to home as of late, writing new material for upcoming projects, along with helping to sell Ryan Lewis‘ mansion, and is constantly raising the bar on fun and entertaining posts to his social media sites, especially Instagram.

Many of us at SMI are humbled and grateful to have known Allen from almost the beginning of his musical career, and not only has he excelled as a musician over the years, he continues to show his humanity through giving back to his friends, fans, and community. As his career takes him far from home for most of the year, when he does perform in and around Seattle, he makes it count. We are pleased to share and extend our gratitude to him and his band for their next “big” Seattle performance. They’ll be over at Gasworks Park this Friday (Aug 11) as part of the Fred Hutch Obliteride kick-off party, for which our SMI founder, Greg Roth, will be riding over the weekend as part of the  12 person #WeRideWhy – zulily team, doing their part to #CurCancerFaster  by riding 100 miles. The team has raised over $9,000.00 so far. (Roth and SMI partner, Jason Tang will be teaming together on the forthcoming documentary, #WeRideWhy.) We’ll be there for the send off, join us!

Mocha Charlie is an amazing photographer who has a real passion for music. She covers and shoots several shows per month in and around the region. She a brilliant photo journalist but most importantly, she is also a mother who does her best to balance out her life and live it to the fullest. Mocha Charlie uses her passion and talent to support the community, her friends and family any way that she can.
Related ItemsAllen StoneChateau Ste. MichelleFeatureGreg RothJoey DosikMocha CharlieObliterideRyan LewisTheo KatzmanTingsekWinerywoodinvilleZulily
← Previous Story Green Day Goes Big For Revolution Radio Tour
Next Story → Aquasox hosts Brewfest and bands