By Christine Mitchell on August 13, 2017@Housetornado37 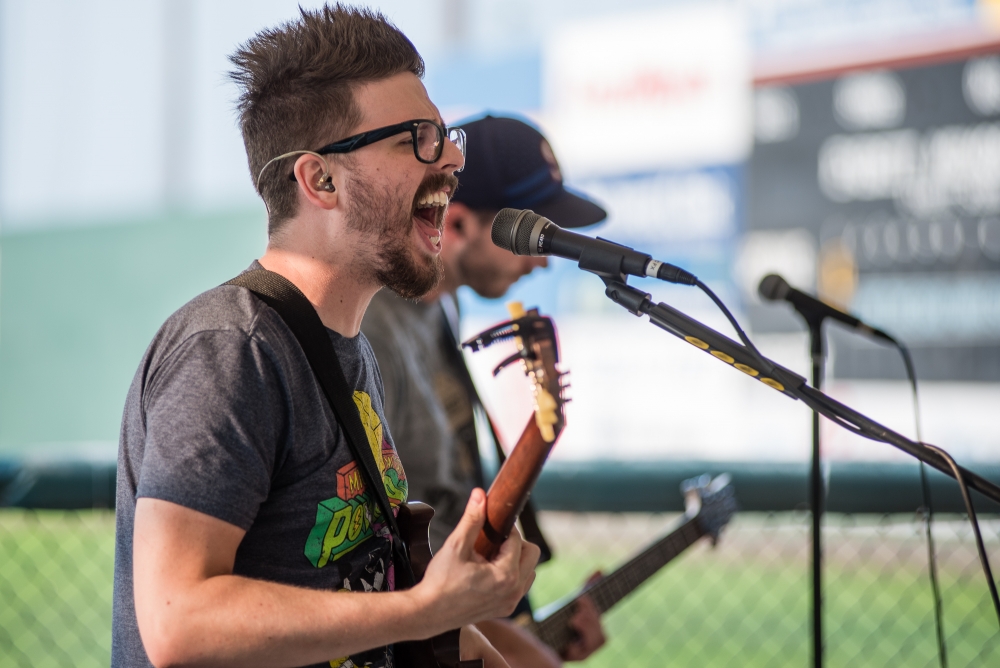 Greet The Sea at Aquasox Brewfest (Photo by Christine Mitchell)

Those with a love for beer, bands, and baseball got their fix at Brewfest, hosted by the Aquasox at Everett Memorial Stadium and sponsored by The Independent Beer Bar, Kennelly Keys Music, and KSER’s The Stereo Wire. Those who purchased Brewfest game tickets were treated to a fistful of drink tickets, a plate of barbecue, and a bevy of taps for tasting. The beer and BBQ patio was full to the brim, and folks basked in the hazy sunshine outside the stadium, filling out raffle tickets to win an Aquasox-signed Strat and amp from Kennelly Keys. And folks young and old gathered near the terminus of the first base foul line to hear some great local rock.

The Spokane Indians got an earful as they warmed up to the sublime, poppy weirdness of Oliver Elf Army. Though the band had to tone down a few of their lyrics for the benefit of the littles present, OEA still brought the sass. Drummer Mary Adams was the epitome of cool, dressed in crisp white, sporting dark sunglasses, and resolutely pounding the toms like it was no big deal. Guitarist Martin Adams and bassist Henry J. Yarsinske were both decked out in the appropriate Everett/Aquasox/Mariners gear, and the band regaled home team fans with sunny-sounding tunes with sneakily dark lyrics. It was adorable to watch little kids shaking their booties to “Booty Warrior,” and heartwarming to hear the crowd’s hoots of approval for the band’s “love letter” to their hometown, which is also the theme song for the Live in Everett podcast.

Sports fans filtering in through the gates and over for a cold one were also treated to Greet The Sea’s expansive, emotive, anthemic rock. Blake Shelton’s introspective lyrics, along with their impassioned delivery paired with dreamy layers of guitar from both Shelton and Nik Pfeifer, won over not only ticket holders but also baseball players, who could be seen watching the band and even taking a few phone pics. The band appeared to be in their element, each rocking their instruments with bassist Ross Powell especially moving and grooving, tossing about. Songs like “A Knock at the Door,” off their eponymous, debut release, paired perfectly with the late summer afternoon and evening, the notes echoing out on the breeze as folks took them in. Even as people walked by the tent where Greet The Sea was playing, they were dancing. It’s easy to see why this band has been making jaunts down to Seattle of late to play venues like The Tractor; their emo-ish, melodic sound vibrates with the masses.

It’s possible that Oliver Elf Army and Greet The Sea’s positive rock is what propelled the Aquasox to their win that night. The only way to find out is to test the theory again at next year’s Brewfest.

Christine Mitchell has been poring over album liner notes pretty much since she acquired the skill of reading, and figured out the basic structure of rock songs at an early age. Whether it’s the needle popping into the first groove of the record, the beeps that signal the beginning (or end) of a cassette tape, or digital numbers ticking off the seconds from zero, music brings Christine happiness, ponderous thought, opportunities for almost scientific study, and sometimes a few tears. When she started attending live shows two decades ago, a whole new piece of the puzzle clicked in and she has been hooked ever since.
Related ItemsAquasoxBrewfestChristine MitchellFeatureGreet The SeaKenelly KeysKSEROliver Elf ArmyThe Stereo Wire
← Previous Story Allen Stone And Friends Groove At Ste Michelle
Next Story → Metallica, Avenged Sevenfold & Gojira ROCK HARD @ Century Link