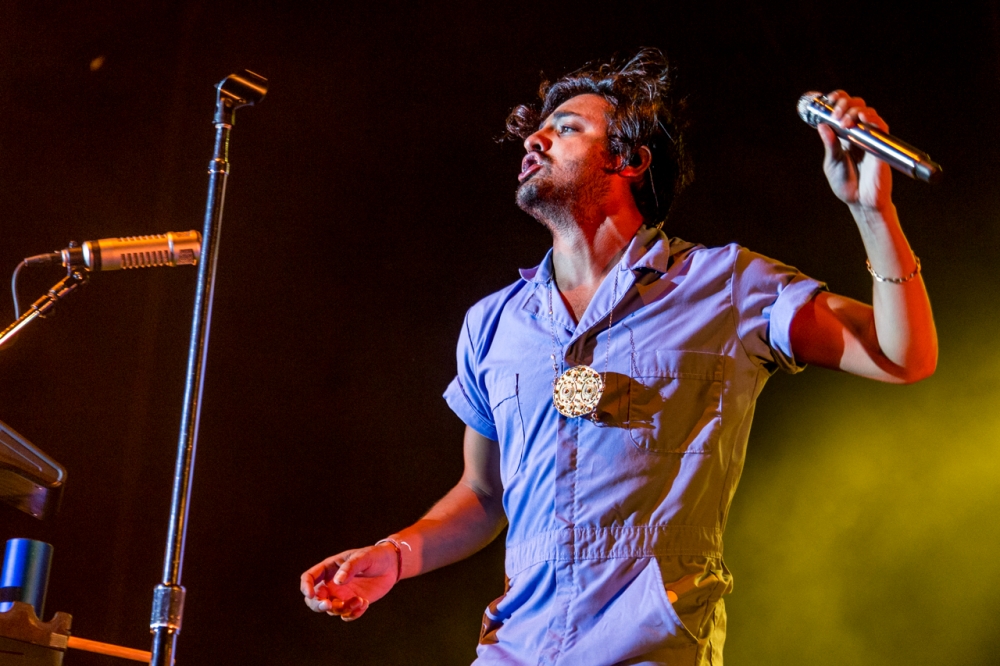 Young the Giant at WaMu Theater (Photo by Stephanie Dore)

Known for their flash, Young The Giant have come a long way in the last few years and drew a great crowd into WaMu Theater for their “Home of The Strange” tour in support of their 2016 release of the same name. Bluesy riffs mixed with worldly influences, YTG’s fans came out for their signature style and left with a smile.

The night opened with Joywave, a five-piece out of Rochester, New York who, with the release of their sophomore LP Content last month, are making their mark. The band owns a wickedly smart sense of humor and a masterful way around climactic synths. Their creepy-but-cute persona, in particular that of lead singer Daniel Armbruster, endeared them to the crowd, many of whom seemed already familiar.

Half neuroses, half culture slaying, Joywave might be hard to categorize, but it’s not a bad thing. Their short set showed off new tracks on the darker side of dance-pop and ended with a double-header of hits in the form of “Somebody New” and “Tongues” off their 2015 debut, How Do You Feel Now?

Long Beach indie rockers Cold War Kids were up next, in support of their April release, L.A. Divine. The most veteran band of the night with six albums under their belt, CWK possess an effortless magnetism that results in anthemic performances with a side of low-key chill, and that quality was on full display.

They opened the set with the lead single “All This Could Be Yours,” off their 2014 album Hold My Home, which made an immediately recognizable grab for the crowd’s attention. From there, they rocked through a widespread catalog of hits mixed with a few lesser-known tracks, the fans attentive throughout.

By the time Young The Giant hit the stage, the enthusiastic fan base had grown and huddled toward the front in anticipation. The stage flashed alive with light as the five-piece opened the set with their hit “Amerika” off their latest album. Clad in a blue jumpsuit, lead singer Sameer Gadhia delivered on his typical high-energy, jumping and spinning across the stage. His animation lends YTG’s set a passionate edge.

A melting pot of influences, YTG’s set list ran deep across their three albums. Psychedelic colors matched their vintage-tinged rock and 60s world-music flair. The crowd was already singing along when Gadhia stopped and said, “Today marks the one year anniversary of Home of the Strange. We’ve been doing this for 10 years. This next song we brought along with us from 10 years ago. It’s a very emotional song for all of us. If you know the lyrics, sing along, feel free.” And with that, they broke out one of their biggest hits, “Cough Syrup,” off their self-titled 2010 debut, the crowd growing louder with every lyric.

The band played a few songs acoustic mid-set, with everyone raising their phones into a sea of twinkling lights for “Firelight,” and closed the night with a multi-song encore ending with their epic hit, “My Body.”