By Christine Mitchell on August 20, 2017@Housetornado37 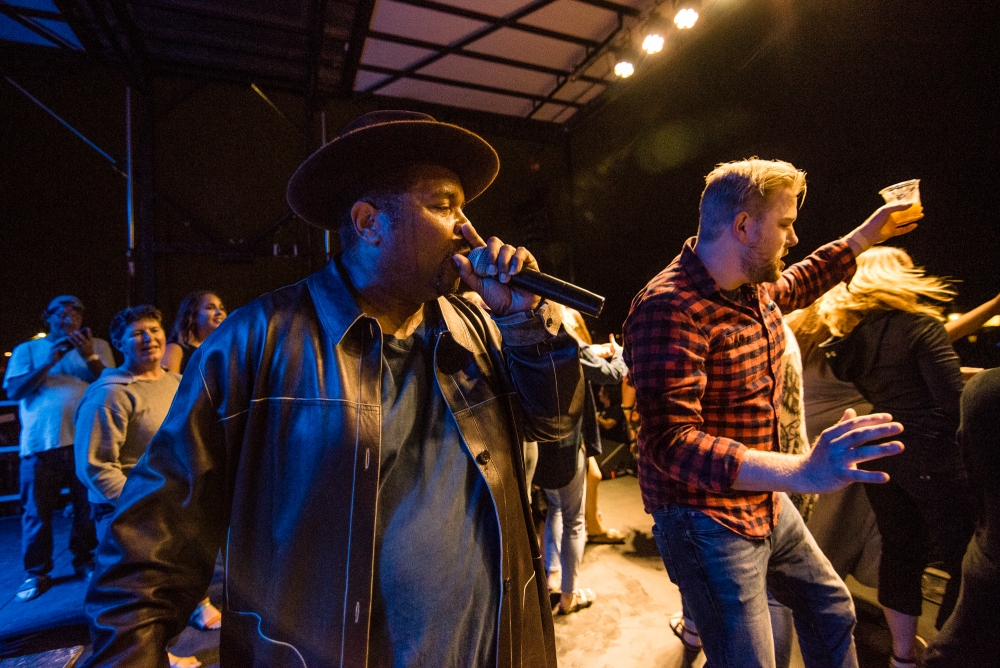 When Sir Mix A Lot took the stage at the Everett Music Initiative’s third annual Rock the Boat concert, held at Boxcar Park at the Everett Marina, he had no idea he’d end the night taking selfie after selfie after selfie with fans that packed that stage, all dancing and singing “Baby Got Back” with him. But then, who would have thought that Everett would play host to the legendary, Grammy-winning artist in the first place, not to mention the iconic, highly influential band Meat Puppets? The event incited excitement from the time that the lineup (which also included Seattle’s Smokey Brights as well as Everett’s Tellers and Marysville’s Fuzz Mutt) was announced, and the day held up to all of its hype, even delivering a few new, unexpected surprises.

The first happy discovery for early arrivals setting their chairs and blankets out on the lawn was Fuzz Mutt. This trio of 18 year olds laid out a series of killer rock songs worthy of a band with many more years under its belt. Max Stephens’ gruff guitar work paired perfectly with his bleached-out voice, and Sean Groda stoically played the bass, cracking nary a grin whilst droning out notes, hair flowing in the wind. Drummer Jared Hoidal was more animated, which made a lot of sense because the drums got a workout. The seated audience murmured their happy surprise to each other about just how good the grungy Fuzz Mutt was.

Tellers has been around for a few years now, and they have spent that time honing a sound that has grown more biting on the edges while retaining its dreamy center. Sarah Feinberg’s voice is just so damn beautiful, and combined with Brad Heyne’s keyboard work and backup vocals (even taking a turn at lead vocal at times), their sound was on another plane, drifting above the crowd and mixing with the cloudy sky. Thankfully, guitarist Tyler Chism and bassist Isaac Melum kept Tellers’ music grounded, providing that harder edge by rocking out with Feinberg, also on guitar. Feinberg’s interesting observation that Tellers had opened for Sir Mix A Lot twice now was just a small part of the humorous banter that smattered the set.

Smokey Brights was, simply put, adorable. Their music is flat out fun. At times quirky and at others rocking, the hubby and wife duo of Ryan Devlin on guitar and Kim West on keys put a fabulous spin on the term “power couple.” The evening breeze blew West’s hair back as she hunched over her instrument, bobbing up and down, and Devlin canvassed the stage and made moony faces at his wife and the crowd. Their latest album, Hot Candy, is super, just like Smokey Brights. The crowd gingerly began to filter forward.

By the time Meat Puppets started up, though, folks were loosened up both by the bounty of Scuttlebutt beer at hand and by the prospect of, well, seeing Meat Puppets, so a crowd left their cozy lawn spots and congregated at the foot of the stage. Curt and Cris Kirkwood’s desert-dried, country fried punk is one of a kind, and the band has been challenging the structures of rock since the early eighties. These days Curt’s son Elmo tours with Meat Puppets, providing rhythm guitar work and adding another full head of hair. The breeze that had fluffed coifs all afternoon didn’t stop as the sun went down, and the cloudy atmosphere paired well with the Puppets’ songs of hell, introspection, and observations on humanity. The Kirkwood brothers have become grizzled with time, but their music sounded timeless and their musicianship was beyond reproach. Curt’s guitar solos and slide work were mesmerizing. They hit on all of the songs that folks knew best, such as “Backwater” and “Lake of Fire;” sometimes it’s hard to be the band that famed musicians love while not becoming superstars themselves. But Meat Puppets showed that no matter who covers their work, the originals do it best.

A change had come over the park during Meat Puppets’ set: a sea of people could be seen in the murk of night. The changeover to the headliner was very quick, and suddenly, there he was: Sir Mix A Lot in the flesh. That sea of people? They ate it up from beginning to end. Mix did “Testarossa,” He did “Jump On It.” He did an awesome version of “My Hooptie” that was prefaced with a great story about the song that involved Everett. Sir Mix A Lot isn’t just a great rapper, he’s a great storyteller and a down to earth human being. He spoke to the audience, acknowledging his age and his amazing ride to stardom, his love of the Pacific Northwest and of local music idols of yore, blasting out “Smells Like Teen Spirit” and pogoing for all he was worth at one point.

The crowd moshed and screamed and danced. Everyone was feeling the weirdness of the moment and reveling in it. Sir Mix A Lot in EVERETT??!!!? And then he asked for a few ladies to join him onstage. Like, seven or eight.

There was no telling how many people came up to join Mix. As “Baby Got Back” began, the entire stage began to roll up and down like a small scale earthquake. There were women and men alike, holding beer and phones aloft, and the line between the performance and the audience at that point became obliterated. Ladies were dancing on the amplifiers placed on the grass. Everyone on stage wanted a piece of Mix, and he patiently accepted hugs and kisses and selfies, one after the other. He couldn’t really finish the song, he was so swamped, so his crew took over and closed the set out for him. And then, it was over. Sir Mix A Lot melted away into the night, and the crowd dispersed soon after.

The Everett Music Initiative outdid itself in making this event happen. Rock The Boat took a ridiculous lineup and, from the food vendors to the omnipresent Scuttlebutt beer to the gorgeous location on the Sound, created something very special. Somehow, the yearly event continues to top itself.

Christine Mitchell has been poring over album liner notes pretty much since she acquired the skill of reading, and figured out the basic structure of rock songs at an early age. Whether it’s the needle popping into the first groove of the record, the beeps that signal the beginning (or end) of a cassette tape, or digital numbers ticking off the seconds from zero, music brings Christine happiness, ponderous thought, opportunities for almost scientific study, and sometimes a few tears. When she started attending live shows two decades ago, a whole new piece of the puzzle clicked in and she has been hooked ever since.
Related ItemsChristine MitchellEMIEverett Music InitiativeFeatureFuzz MuttMeat PuppetsScuttlebutt BrewingSir Mix a LotSmokey BrightsTellers
← Previous Story Skid Row and Vixen Bring a Rocking Good Time to Snoqualmie Casino
Next Story → Massy Ferguson Heats Up The Tractor