Frank Turner and the Sleeping Souls at the Paramount Theater 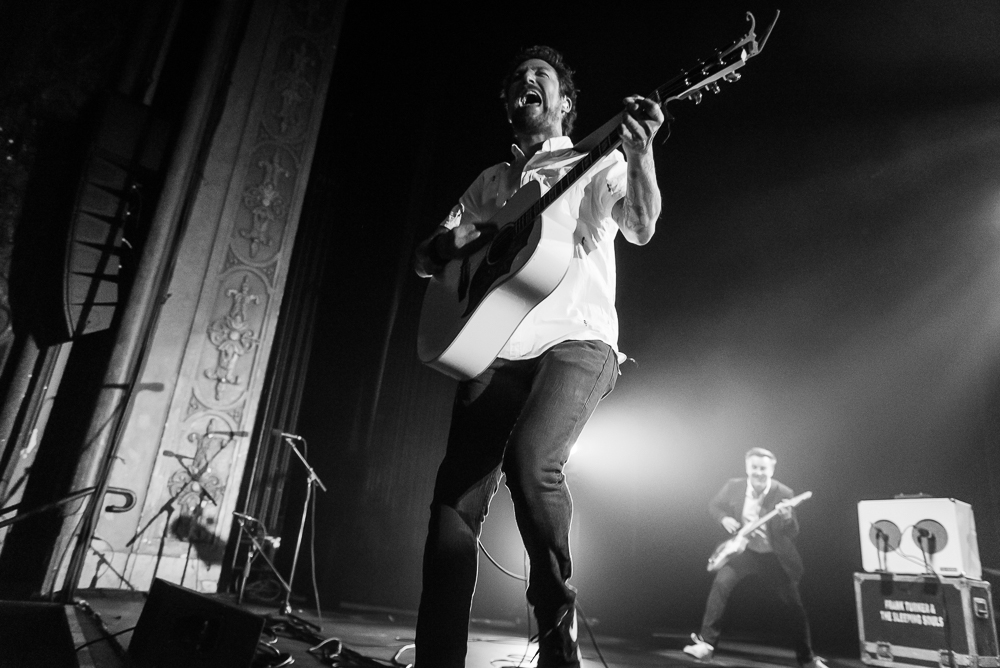 “Be Kind, Begin a Frenzy”

Frank Turner and The Sleeping Souls have put in some serious work over the years.  Known for their passionate, immensely energetic live performances, Turner has built quite a reputation.  Averaging just about 161 shows a year since 2004, they have cemented themselves as one of the hardest touring bands in rock n’ roll.  For show #2100 (and #7 in Seattle), they invaded the Paramount Theatre to a crowd who may not have known who they were, but remembered his name afterwards.

Opening for the acclaimed singer-songwriter Jason Isbell, the crowd at the Paramount was a bit on the calmer side.  When Turner opened with the blistering anthem “I Still Believe,” a song dedicated to the healing power of rock n’ roll, it set the mood for his entire set.

The next two songs, “The Next Storm” and “Get Better,” are standouts from Turner’s most recent release, Positive Songs For Negative People.  With lyrics “I don’t want to spend the whole of my life indoors/laying low and waiting on the next storm” and “We can get better/because we’re not dead yet” respectively, the positivity flowed through these songs like Class Five rapids.  His record before Positive, entitled Tape Deck Heart, is described as an album “about the crash” and Positive is “getting up from the crash.”   After the first three songs, the crowd was standing, foot stomping, and mirroring the frenzy on stage.

Turner and his crew were true to form with the palpable energy and chemistry they flooded on stage.  Complimenting Turner was the frenetic movements of guitarist Ben Lloyd and the calm cool of bassist Tarrant Anderson.  The crowd responded in kind with a dance party in the rows of the theater.  This was one of those moments where a pit would have been a wonderful thing to have.

Turner is not just a one gear performer; he does have a tender side.  For “Be More Kind,” he went it alone.  Explaining that the world has been turned a bit upside down recently, he felt compelled to craft a simple of message of how kindness can change the world.  A lovely moment for the crowd, who desperately needed a break.

However, the break didn’t last long.  Turner then began the build up with the tender love song, “The Way I Meant To Be,” which is not quite a ballad and definitely a sing-a-long for those who know the song.  After the love song, Turner asked for a volunteer from the crowd, and he came across Joseph.  A jolly man in a Tommy Bahamaesque shirt and who had a couple of souvenir cups of wine, he was asked by Turner if he would play a harmonica solo during “If I Ever Stray.”  He obliged and absolutely killed it.  A watershed moment for the night.

Rounding out the set was the crowd favorite “Photosynthesis,” a story about how getting older does not mean settling, shutting up, or growing up.  A fitting end to a show for a performer who over a 13 year career of leaving it all on each stage he has performed on, he certainly proved to the crowd that he doesn’t settle, shut up, and at times grow up.