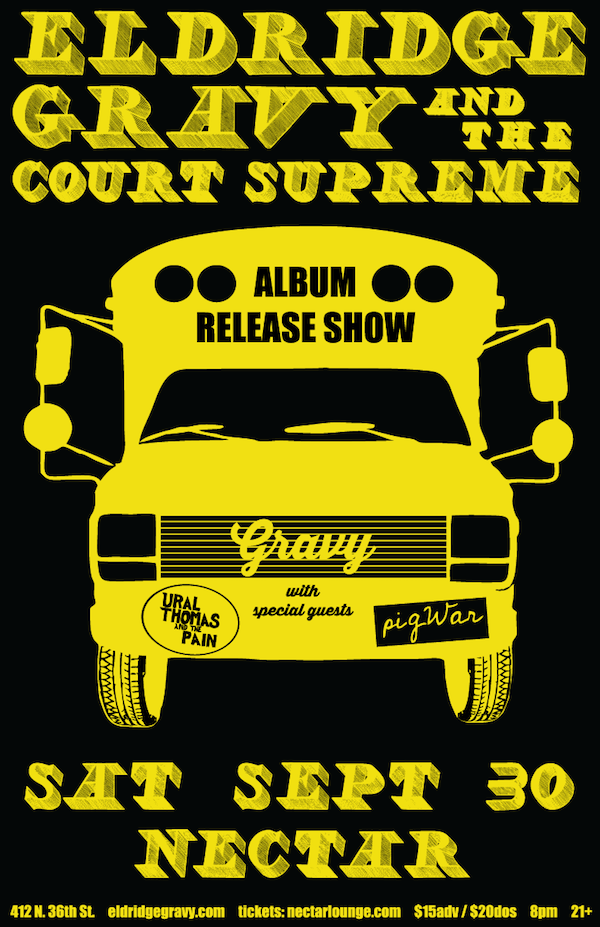 If you’ve been feeling like your meals have been missing some funky new Gravy, we have just the thing to satiate your palate. Eldridge Gravy and the Court Supreme is releasing their fourth album On September 30th – and it’s full of substantial, danceable funk, just as you would expect from this powerful 14-piece ensemble.

The album kicks off with “Hey Big Freak.” Donny D raps about growing up in Seattle and how he’s met all types of people. Until he saw something in Ballard that “Blew. My. Mind.” It was a Big ‘ol Freak who ended up inspiring this song. Donny invites him to “Come ride with us, on the yellow bus.” Hey, Donny D, please come pick me up, I want to get on the yellow bus!

Halfway through the album, “Stop Pretending, Part 1” slows down the pace a bit with a deeply soulful vibe. It’s a bit of a curve for a band that usually keeps it high energy. At nearly seven minutes long, it will have your hips swaying back and forth in a slow groove. You’ll feel the same way with “It’s Been.” The horns are slow and sultry yet the lyrics are powerful. Eldridge Gravy wrap up the album with the uptempo “Fencewalk.”

The thing about Gravy is that they welcome the weird, and it shows in their lyrics, videos, and live shows. This album reiterates their strong band personality and takes you on the greasy gravy train right along with them. Come as you are – get weird, get funky. Find your freak flag and fly it high!

Bring your dancing shoes to Nectar on Sept 30 for their album release party. They will be backed by two Portland funk powerhouses: Ural Thomas & the Pain, who are a Portland pillar of soul and funk, as well as pigWar, who pride themselves on being pure psychedelic soul. Gravy’s last CD release party sold out, so don’t sleep on this! Purchase your tickets ahead of time here: Tickets