Home / Reviews / Local Artists / THE NEXT STAGE OF ARTIST: NODRA

THE NEXT STAGE OF ARTIST: NODRA 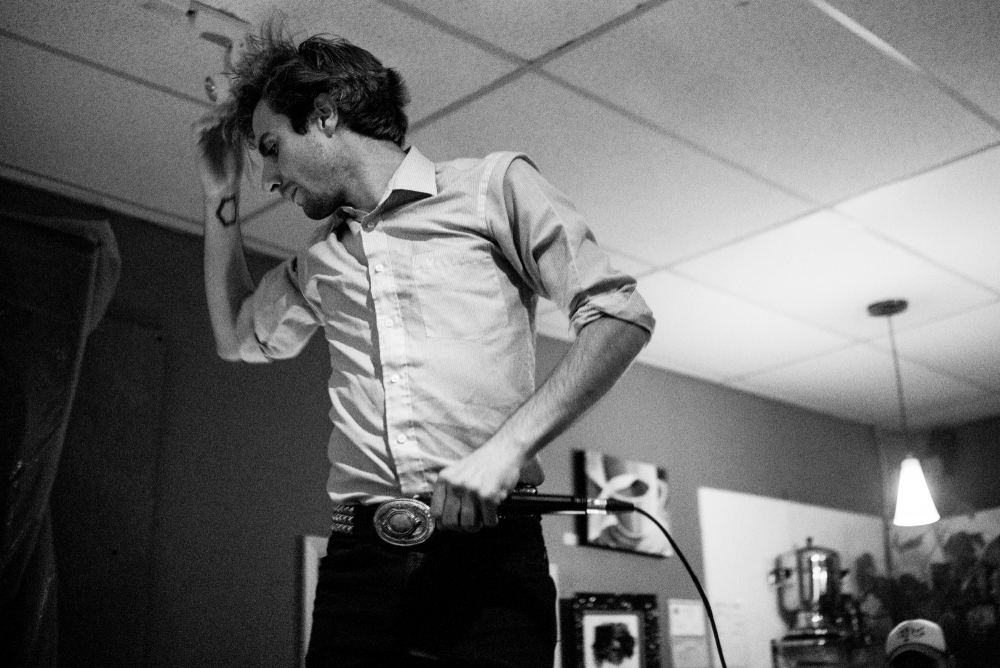 SMI closed out September at Black Lab Gallery in Everett, “where the art doesn’t suck.” And that mantra could not be truer on that night. All three bands on the bill donated their diverse talent in ways to keep the audience’s attention at a whole. It was almost aggressively hypnotizing, if there is such a thing.

The opening band supposably made me feel like I was watching an excerpt from Portlandia, which is great because I love that show. The little three piece band explored a simple style of tunes that could bring anybody who used to be in a band right back to the garage they started in. They sold their music downloads via Lady Speed Stick deodorant.

But the scene was set for NODRA, an acronym which stands for New Order Dragnet of Revenge Artists. This debut show had been anticipated for weeks. NODRA had plastered their manifesto all around town, allowing the word of mouth to travel with godspeed carrying the rumors of boundary-pushing performances. So when the lights elevated between sets and the complete b-side collection of The Ramones was the crowd’s holding music, we all felt the definition of suspended animation.

Clear plastic lined the walls and floor of the stage giving it the setting of a murder scene from Dexter. The lights finally went dim and everyone’s eyes anxiously traced the room looking for the possibilities of what was to come. On a wheeled platform, a long-haired, hooded man resembling a hobo Jesus, Tyler Giese from Laser Beam, was slowly pushed to the stage where he met his plethora of instruments. A slow, ambient chord stretched out to a faint almost nothing. Then front man Ryan Alexander took the stage, the beat dropped, and so did a wave of music creating a wall of sound like a punch to the throat.

The whole show went on like that; a total captivation of engagement and entertainment. I could give you all a play by play but I am not allotted that much room to write.

But Cliff Notes are essential.

Many wardrobe changes were at play, though only two members were on stage. Giese and Alexander astounded the crowd with music sounding like the alternative 90’s before alternative meant folk music. The sound man, Adam Bagley, performed beyond sound quality. He mixed prearranged tracks, creating sound disfiguration while at the same time orchestrating a strikingly intense display of lighting to add to the night’s effects.

Alexander held the room’s attention by engaging in a Q & A halfway through the set while Giese bent chords and keys for dramatic effect. The coup de grace was delivered by Giese pouring honey all over Alexander in mid-scream during “Glass Wire” to end NODRA’s set for the night. Alexander held that painful scream as sweetness coated him and the stage.

There was more than theatrics happening.

If you read the manifesto found at templeofnodra.com, you should be able to get a sense of what NODRA feels has been forced down musicians’ throats for too long. This may have been the pain Alexander was expressing.

We all started out as music lovers before the lot of us grew the idea of becoming sold out musicians. We were taught a structure, we should be in a band and play the music we were told to, not the music that flowed through us. We should follow the structure of following and not try to lead as individuals, together, to break the mold.

Imagine your favorite bands. Now imagine if your favorite artists made a couple pieces together, a collaboration where their expression could truly run free. Call it unity, and maybe, call it NODRA.