The Bold Heart Of Bleachers 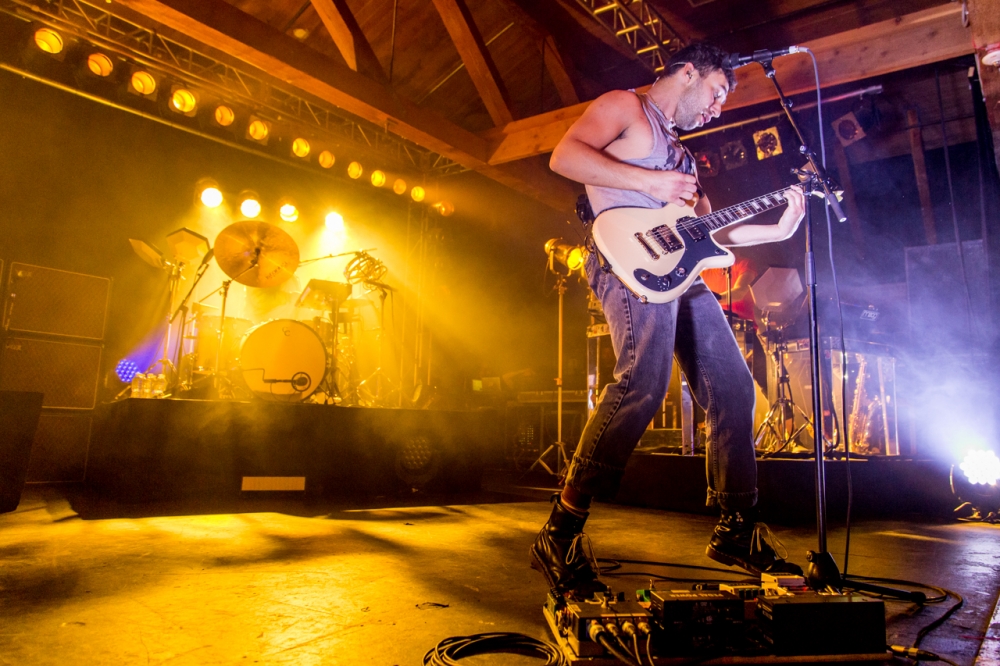 Led by the artsy, Springsteen-loving Jersey boy Jack Antonoff, Bleachers brought their Gone Now Era Tour to Seattle’s Showbox SoDo,  in an effort that proved exactly why fans keep coming out in fervent support of the underdog, no matter how major that dog might grow.

The night kicked off with Tangerine, originally from Seattle, but now operating under the bright lights of LA. In the near-dark, tinged with violet light, they played a short but solid set that brought out plenty of local fans. Those local fans seemed to already know plenty of the lyrics, especially for their latest single, “Sly Moon,” which had everyone singing along.

Tangerine’s brand of alt-pop has always been as sweet and tangy as its namesake fruit, and Hollywood seems to be lending them a deserved ray of light. While they were making quite a name for themselves here, it didn’t take them long to jump on what some would call a pretty significant tour with Bleachers. And they gave it all they’ve got. Their show was as chill and sunny as ever with a sheen of dark drama that is sure to grab even more interest for the trio.

That darkness exploded into light once Bleachers hit the stage. The solo project – but live five-piece – of Jack Antonoff, Bleachers was out in support of their sophomore album, Gone Now, released in June 2017. There were two drummers, at least four key and synth setups, guitars, saxophones, and the opening spoken-word “Dream of Mickey Mantle,” with Antonoff donning the gilded uniform and yachting cap of the album’s cover art, speaking from a mic-riddled podium at the back of the stage.

The show’s sense of seriousness wore off pretty quickly, and by the time they hit “Wild Heart,” a few tracks in, the band’s infectious energy had permeated the crowd. While newer racks are not as immediately cohesive as those that make up Bleachers’ 2014 debut, Strange Desire, live, they mix well. The show felt whole and traded on emotions with a capital E.

Antonoff has the miraculous ability to turn 80s pop influences and emo rock into infectious, anthemic hits. And he doesn’t just do it for himself. In fact, you could argue he doesn’t do any of it for himself. Besides penning and producing hits for the likes of Lorde, Taylor Swift, Sia, Carly Rae Jepsen, and Grimes, Antonoff speaks clearly about his passion for the fans. He thanked them profusely, multiple times, for showing up and even fed them cake for one of the bandmates’ birthday.

Is Bleachers over the top? Sometimes, definitely. But their show validates their own, and their fans’ emotions in a cathartic, arena-sized way. In a haze of fog, layers of denim, and plenty of strobe lights, Bleachers were brazenly sentimental. They swim in pop radio’s sea of hard edges and sex on a platter, all the while maintaining a romanticized view of youthful truth.

And they do it with obvious passion. Antonoff never stopped moving, playing to the crowd, getting up close and personal. At some moments it felt like he was about to tear up, and at others like he would explode in a ball of fiery pyrotechnics.

Bleachers proved, with every hit-ready track they played, that moments don’t have to be complicated. Sometimes they just are.