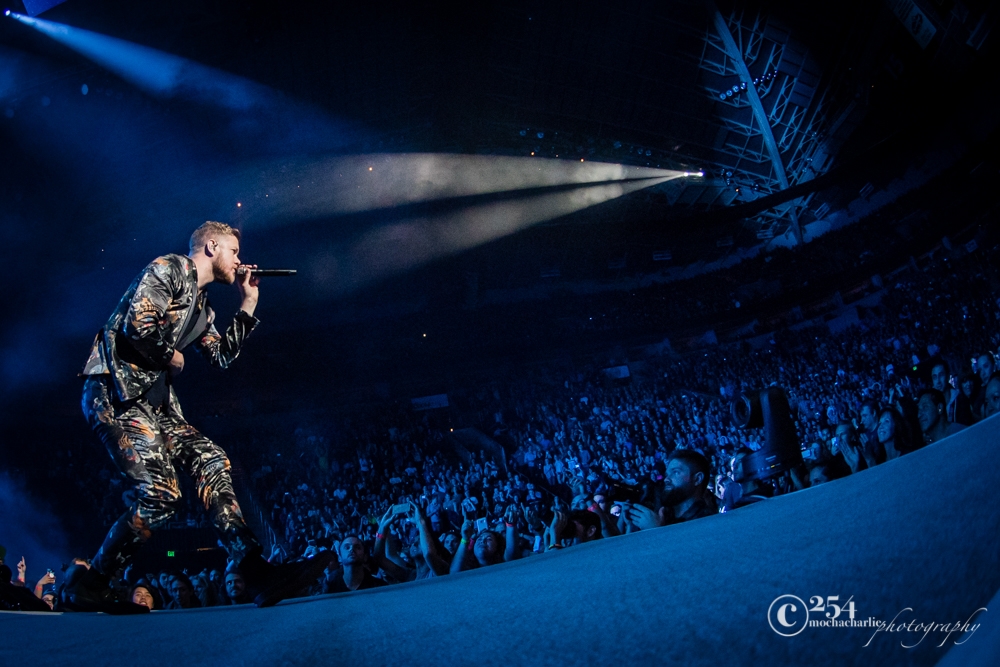 Smaller shows for Imagine Dragons may be a thing of the past. We’ve watched this band grow over the span of a few short years, from playing smaller clubs to selling out arenas and other major venues around the globe. And if they keep pouring out hits like their latest single “Believer” (Second longest running number one ever on the rock charts according to Forbes), this band is showing no signs of slowing their pace.

Their stop here in Seattle a few weeks back was filled with anticipation and heightened emotion. Hailing from Las Vegas, the band had a ‘heavy heart’ moment on stage, taking time to offer their respects and condolences to all those effected by the recent tragedy. Imagine Dragons let fans know that they were safe amongst friends at the KeyArena and that they were both proud and fortunate to bring music to crowds as an opportunity to heal and make whole those who continue to support musicians worldwide.

Although their latest EP, Evolve, has received mixed reviews from critics, it peaked at number one on the Billboard charts, and their use of the first few singles on multiple media platforms has given a boost to their fan base. Many of their current US tour dates are selling out well before show dates, and music subscription plays continue to soar. Imagine Dragons’ US tour with K Flay and Grouplove will continue through December, and then the band will head overseas for a handful of dates in Southeast Asia and Europe through April 2018.

Mocha Charlie is an amazing photographer who has a real passion for music. She has her finger on the Pacific Northwest music pulse. She covers and shoots several shows per month in and around the region. She a brilliant photo journalist but most importantly, she is also a mother who does her best to balance out her life and live it to the fullest. Mocha Charlie uses her passion and talent to support the community, her friends and family any way that she can.
Related ItemsArena showevolveFeatureGrouploveImagine DragonsK FlayKeyArenaMocha CharlieMusicTour
← Previous Story Barb Wire Dolls Level Louie G’s Pizza
Next Story → Leava: new music series begins with ‘CDT’