Another chance to rock with K. Flay 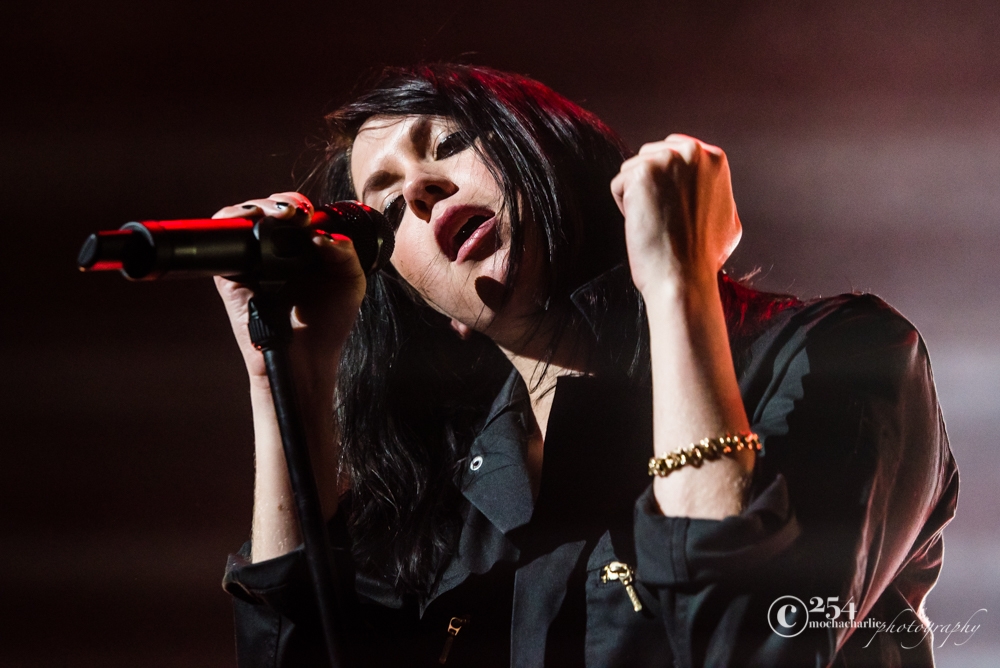 K. Flay quietly rolled through Bellingham on Saturday, Oct 7, to perform for a sold-out crowd at the Wild Buffalo after opening for Imagine Dragons the night before at KeyArena.

She brought along two local openers to warm up the crowd. First up was WMD, a solo electronic project by Michael Erickson. He bounced between letting loose experimental synth electronica on the boards to jamming with an accompanying electric guitar. Before he started playing, someone from the audience yelled, “Where did you get your sweater?” The answer? “H&M.” Up next was Claire George. She lit up the stage with two Himalayan salt lamps which sat on the edge of each keyboard. With the chill vibe the lamps set, I was not prepared for the deep electronica and heavy bass to thump through my body as she got started. It was an exhilarating surprise that garnered the attention of everyone in the room. She layered in vocals and her influences of Dido and The Cranberries was front and center. She wrapped up her set with a beautiful Cranberries cover.

As the stage went dark for the headliner and the two piece band quietly walked on, the crowd of 20-somethings started to go crazy for the anticipation of K. Flay. Through the foggy red flashing lights, she bounced up to the microphone and gave a shout out to the crowd, “Bellingham!” She immediately launched into her most recent hit, “Giver,” off of her latest album, “Every Where Is Some Where.” She bounced from one side of the stage to the next, leaning over the crowd and touching hands with those who were reaching for her.

The first time I saw K. Flay was a year ago – it was a Halloween show at Barboza in Seattle. She was dressed in a skeleton onesie with fake blood dripping down her mouth – get it, “Blood in the Cut?” Here we are a year later, she’s been touring, has a new album, and she’s rocking a new type of onesie. An all-black, mechanic style jumpsuit that says, “BLOOD IN THE CUT” around a large heart with a knife through it on the back – so appropriate as this girl slays the hearts of fans every set she plays!

As she launched into her song “I Want More,” the gaggle of young girls went crazy, singing every word with her. Their heads were banging and their hair was flailing (in my face). K. Flay is a female rock legend in the making for the young people cutting their teeth on up and coming artists. It’s truly a beautiful thing to watch a female artist double the size of her crowd in one year and sell out shows as the headliner.

Unbeknownst to most of the crowd, Flay’s usual guitarist, Josh Lippi, had a family emergency and was not able to play the Bellingham show. At the last minute, local Seattle songwriter, producer, engineer, and guitar shredder extraordinaire, Elan Wright, learned her entire set and stepped in for a flawless show. Kudos to Austin Santiago for orchestrating this genius set of musicians for a sold-out show an hour and a half north of Seattle and letting SMI in on the fun.

The K. Flay crew just announced another US tour where she’ll be hitting up Seattle yet again in January 2018, this time at the Showbox. This girl keeps climbing up the music charts and her venues keep expanding. Don’t sleep on tickets this time around – go watch her PJ Harvey-type stage presence carry her into lady rock legend status.

Tickets for the Showbox show can be found here: Tickets