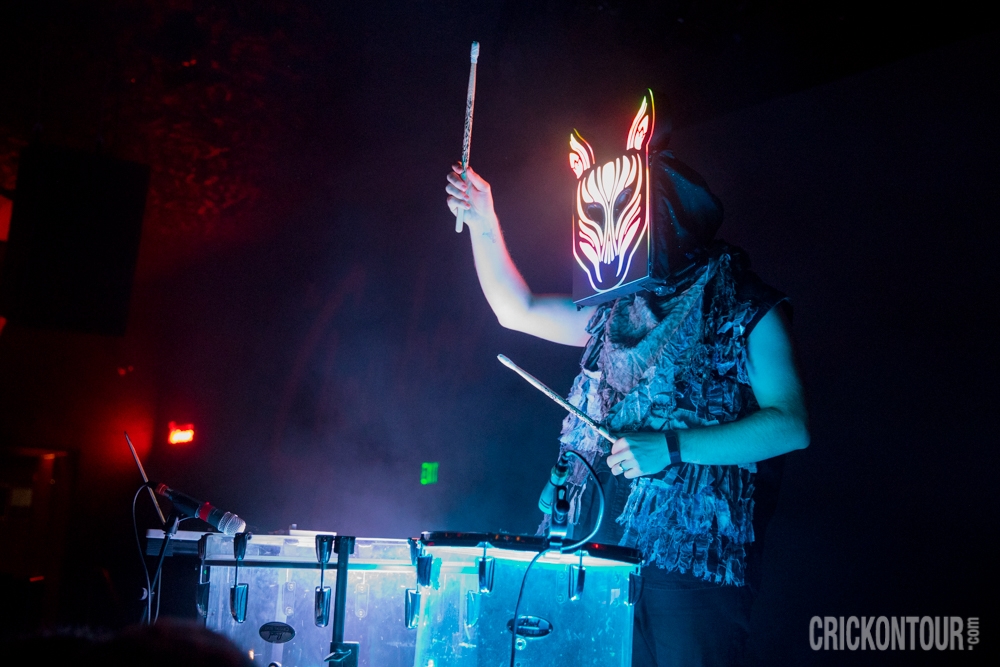 Slow Magic hasn’t changed a bit in the five years since he first made a splash with dance music audiences, supporting Gold Panda and XXYYXX on tour. He still dresses in an earth-toned muscle tee, conceals his identity with a mythological animal mask, and speaks only through gestures. What has changed, however, is the scale of his audience. The soft-footed, kind-hearted, electro-drumming creature captivated a nearly sold-out Showbox at the Market last Friday night, proving that authentic connection with an audience is paramount.

Well, to say that nothing has changed isn’t quite true. Notably, Slow Magic’s high-tech mask has received an operating system upgrade! His new slimmer, lighter mask looks to be a better ergonomic situation. The improved mask also provides new avenues to enhance production value, capable not only of lighting up in solid colors, but displaying a light show in and of itself. Throughout Friday’s show, the imagery on his mask was in constant motion, ranging from psychedelic swirls to sunshowers of light, and back to its original multicolor panel scheme.

The most striking element of Slow Magic as a performer—and the reason his audiences have grown so much over the past few years—is his remarkable ability to connect with fans. As a nonverbal creature, he inspires audiences to listen differently–more intently, and with a sense of curiosity and empathy. When he waves, the audience waves back. When he claps, they clap. His fans are actively watching and listening, eager to mirror the artist’s expressions and reflect their appreciation, whether that means jumping up and down or forming heart gestures with their hands in adoration. The love in the room was mutual and flowed freely during his 55 minute long set Friday night.

The artist’s 2017 album, Float, finds him with a denser sound that leans more EDM than his quasi-minimalist roots, allowing his music to soar and inspire fans on the dance floor. The main floor of the Showbox was packed with fans who came out to move and groove–donning sequins, satin, and sparkly sneakers, some impressively dancing in a ballroom-EDM-mashup style in a highly appropriate tribute to the Showbox’s ballroom roots.

In recent years, Slow Magic’s sound has evolved from a semi-minimalist sound (think Gold Panda meets Tycho), into a more crowded, heavily produced sonic space. Being a fan of minimalism, this reviewer was pleased to find him still performing material from his 2014 album “How to Run Away.” An early-set highlight was his rendition of early hit “Girls,” which found him plunging, toms in tow, into the audience, drumming and jumping away, and joined by a swirling circle of adoring fans. Another standout was the 2017 track “Belong 2 Me,” a chillingly moody track featuring vocals from the Antlers’ Peter Silberman. At their best, Slow Magic songs feature strong melodies and space to reflect, qualities encapsulated fully by both these tracks.

The evening’s opening acts were a study in contrasts. Japanese producer Qrion warmed up the crowd with her gentle, dreamy minimalist electro vibes, casual-hip style, and seamless transitions. She was followed by Parisian EDM producer Point Point’s heavier-handed set that catered to short attentions spans by mixing together relatively short cuts of familiar tunes like Kanye’s “Flashing Lights,” KC and the Sunshine Band’s “That’s the Way (I Like It),” and dance floor guarantor Michael Jackson’s “Beat It.”