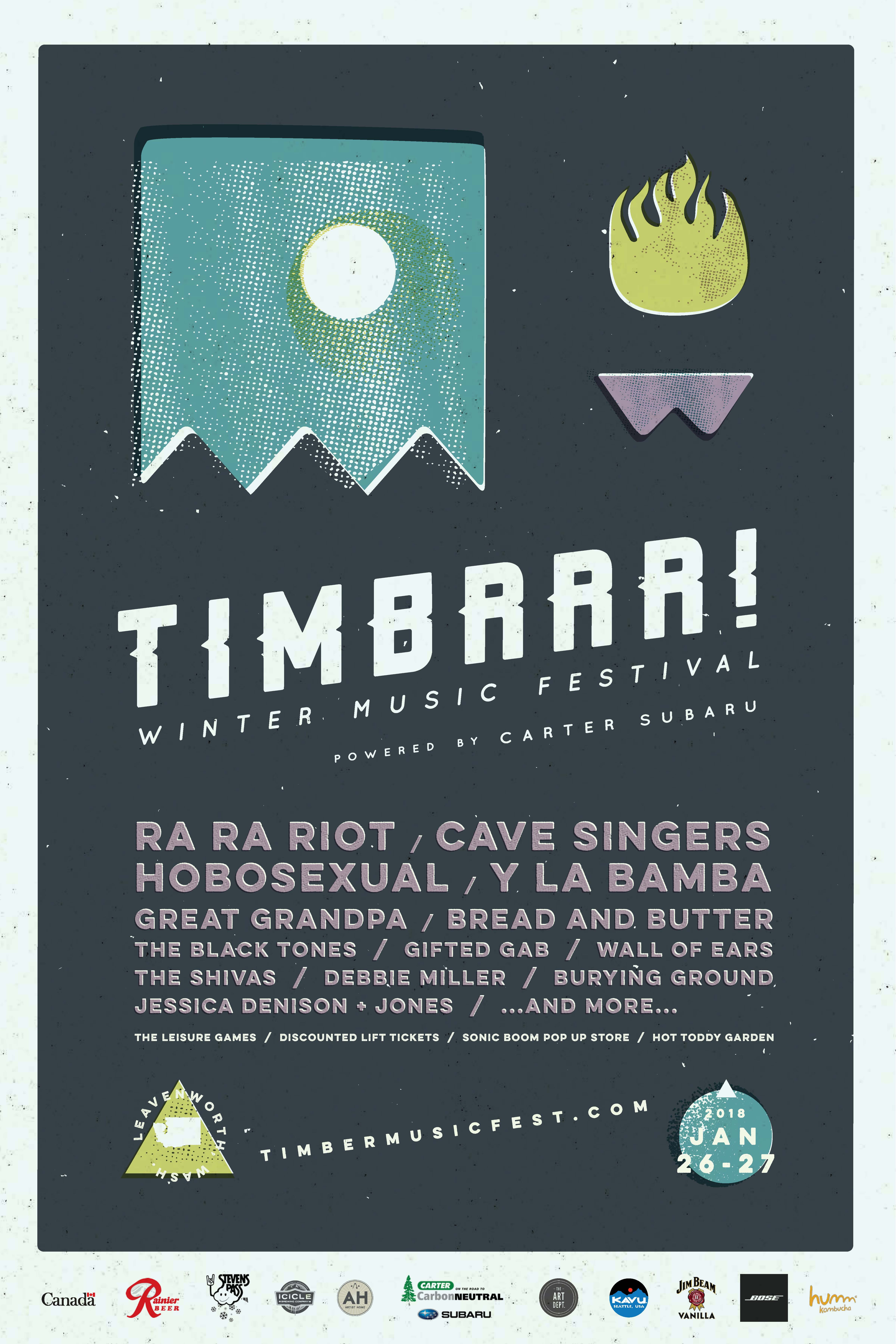 This weekend, live music has a tangible temperature – cold. Maybe you’re in Western or Eastern Washington and looking to get away for some winter pastimes, or perhaps you are an avid concertgoer; or, you might even live in Leavenworth yourself. Whatever your flavor, there’s snow place better to be this weekend than the annual Timbrr! Winter Music Festival in Leavenworth, WA. Featuring prominent national headliners like Ra Ra Riot and The Cave Singers alongside a wealth of important Pacific Northwest acts such as Bread & Butter, Moorea Masa & the Mood, Great Grandpa and The Black Tones (in addition to a plethora of wintery amusements), the Timbrr! Music Festival, in its 5th year, is looking as attractive as ever.

Serving as a counterpart to the Timber! Outdoor Music Festival (which occurs every summer), Timbrr! takes its own direction in terms of entertainment. Those looking for time on the slopes can relish in the glory of half-priced ski and snowboard packages at Stevens Pass (we recommend packing extra socks – both here, and really, everywhere in life). Saturday’s schedule includes the festival’s traditional Leisure Games, where attendees can get silly playing classic lawn games for a chance to win some awesome prizes courtesy of Timbrr!. Sub Pop Records’ pop-up record store will also be open for anyone looking to buy band merch or peruse some cool vinyl.

Feeling like more of the type to hang out around the musical happenings? It’s the point of the weekend, after all. Timbrr! will leave crowds satisfied with passionate sets from the scheduled bands on the 21+ stage located at Leavenworth Festhalle. Enjoy a hot toddy or a beer courtesy of Icicle Brewing as you chill to the eclectic sounds of Y La Bamba or Gifted Gab – or, set down your drink and hit the front row for high-energy acts like Hobosexual, Wall of Ears, and The Shivas. But do not mistake us here: the folks at Artist Home intensively curate the lineup each year, meaning every artist scheduled to perform will undoubtedly blow minds. There will even be a few acts open to all ages, performing at Icicle Brewing and Munchen Haus on Saturday (Debbie Miller, Jessica Dennison + Jones, Mike Edel, and The Burying Ground).

Timbrr! Winter Music Festival takes places this weekend, on Friday, January 26th and Saturday, January 27th. Tickets are available online now, with weekend passes on sale for $75 and single-day tickets going for $40. For the lineup, schedule, and further details, visit their website here. Don’t flake out on us – we’ll see you in Leavenworth this weekend.

Paddy Moran is an active musician and participant in the bustling Seattle music scene. When not discussing his extreme distaste for eggs (any style), Paddy can usually be found fumbling around, looking for lost personal items and accoutrements. Have you seen his backpack? It was right here a minute ago; someone must have moved it. In his personal life, Paddy requires almost constant, near-24/7 audial stimulation, which explains both his undying love for new music and why he won't just stop talking already. Oh, there's my backpack. I mean his.
Related ItemsArtist Homebread & butterDebbie MillerFeatureGifted Gabgreat grandpaHobosexualicicle brewingjessica denison + jonesLeavenworthleavenworth festhallemike edelRa Ra RiotSub Popthe black tonesthe burying groundThe Cave SingersThe Shivastimbrr!timbrr! winter music festivalWall of EarsY La Bamba
← Previous Story Preview: NYE Soiree With Thunderpussy
Next Story → DOTV benefit at Neumos this Saturday