By Alex Crick on February 7, 2018@crickontour 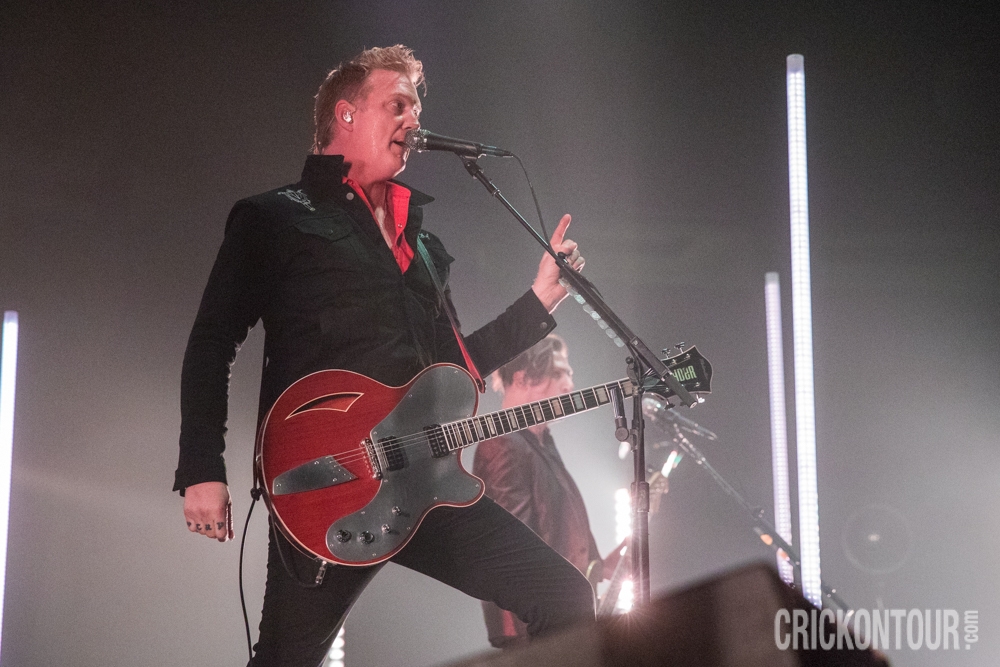 Queens of the Stone Age at KeyArena (Photo by Alex Crick)

“We love this fucking city!” Josh Homme of Queens of the Stone Age shouted between songs as the crowd cheered them on. Alas, the city had not been as kind to them. The show felt a little empty as large sections of the upper ring at KeyArena had been curtained off, and the sound wasn’t the best. But that didn’t stop the people who came to see these alt-rock legends perform.

Kicking off the evening were the Eagles of Death Metal, a hard hitting garage punk group who came out strong with a hard “Magic.” Lead singer Jesse Hughes jumped around and flashed a few hand horns as the the band pumped out its all too short seven song set. He and the rest of the band were clearly having a great time as they opened for what Hughes called “the greatest band in the world.”

After a quick set change, QOTSA walked out on stage to a dazzling display of bright lights as they launched into a powerful version of “If I Had a Tail” from their 2013 album …Like Clockwork. Throughout the night, the five piece pulled out all the stops, with Josh Homme’s powerful voice lighting up the room, John Theodore’s epic drum solos during “No One Knows,” and Troy Van Leeuwen’s double necked guitar work on “Villains of Circumstance.” Josh Homme even recalled his first Seattle show, performing at the (now defunct) OK Hotel in Pioneer Square.

Despite a few hangups with the sound, the band played am epic 20 song set full of solid hits that left the crowd reeling for more.

If I Had a Tail
Monsters in the Parasol
My God Is the Sun
Feet Don’t Fail Me
The Way You Used to Do
Misfit Love
You Think I Ain’t Worth a Dollar, but I Feel Like a Millionaire
No One Knows
The Evil Has Landed
I Sat by the Ocean
Smooth Sailing
Domesticated Animals
Make It Wit Chu
I Appear Missing
Villains of Circumstance
Little Sister
Sick, Sick, Sick
A Song for the Deaf
Go With the Flow
Encore:
A Song for the Dead

Alex Crick is a Seattle based freelance photographer specializing in music photography. His interest in photography began as a school project in the early-90′s, when he also attended many live music shows. Eventually, he combined these two interests by conveying the power and excitement of live music through the eye of the camera. Over the years, he’s traveled all over the country photographing live musical acts. You can find samples of his work in SPIN, Billboard, Esquire. View his work here
Related ItemsAlex CrickEagles of Death MetalFeatureKeyArenaQueens of the Stone Age
← Previous Story MØ coming to Showbox SoDo
Next Story → Diet Cig is headed our way