By Christine Mitchell on March 10, 2018@Housetornado37 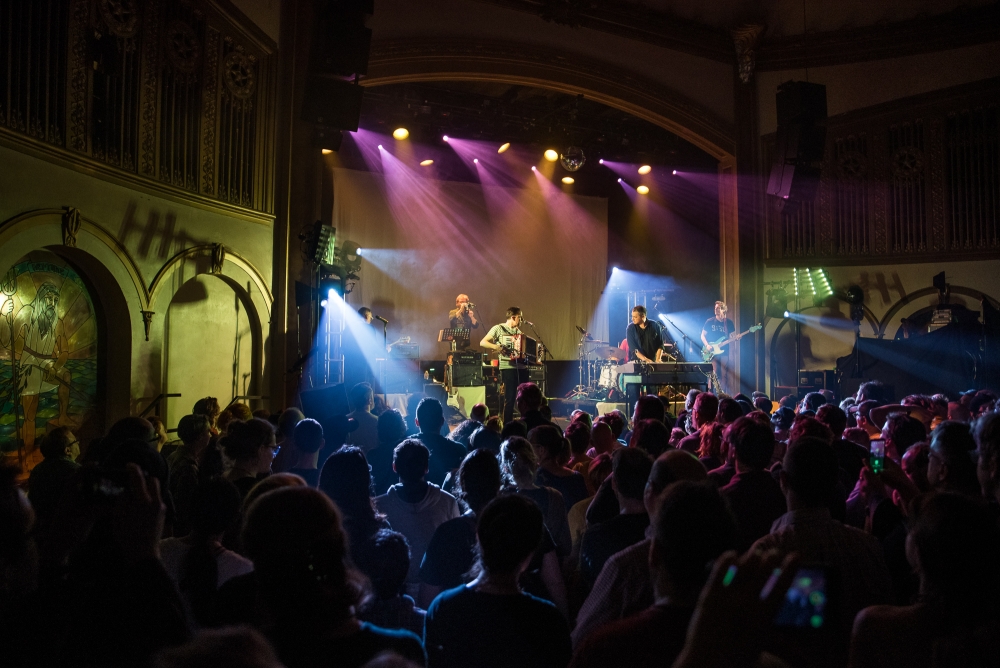 They Might Be Giants at The Neptune (Photo by Christine Mitchell)

It would be ridiculous to describe all that went on during They Might Be Giants’ two set long (plus two encores) show at The Neptune Theatre. You’ve certainly heard the old adage of getting your money’s worth. Well, this show proved to be a bang for each and every penny. It was a night that was staggering in scope, plumbing the depths through and through of decades worth of the band’s music. The Seattle venue was the first date on the tour to sell out (but not the last). Scads of fans jockeyed for position, and it seemed that the stream of people filling the floor would never end.

The band came on about fifteen minutes late, and the crowd was practically frothing. The sight of John Flansburgh and John Linnell incited a roar, and the band began their juggernaut with their 1988 hit “Ana Ng,” which for many bands would be peaking too early, but for TMBG was just an appetizer. The evening was chock full of fan favorites, deep cuts, new songs off their new album I Like Fun, and even a couple of covers, including Destiny Child’s “Bills, Bills, Bills.”

The first set of songs lasted about an hour and ran the gamut of TMBG’s career; new songs like “I Left My Body” snuggled right up to old favorites like “Your Racist Friend” off of Flood and “The Mesopotamians” from The Else. The first hour ended with “Birdhouse In Your Soul,” which featured beautiful twinkling lighting to go along with the song’s nightlight theme. After an intermission the quirky, Bad Lip Reading styled video of the remix of “Last Wave” off of I Like Fun was played, and its droll usage of footage from the Run DMC/Aerosmith video for “Walk This Way” was weirdly entertaining. Flansburgh, Linnell, and drummer Marty Beller then set up shop in a corner of the stage, minimally lit, to perform a few songs for the “Quiet Storm” portion of the evening. Acoustic versions of “I Like Fun” and “Tippecanoe and Tyler Too,” among others, ensued, at one point with Beller playing an actual school bell (“purchased at a yard sale,” quipped Flansburgh). Between songs thunder rumbled out of the speakers and lightning flashed.

Not content to stay quiet for too long, the rest of the band came back out for another hour or so to make sure all of the bases were covered for the night. Each time a song was announced fans squealed with delight. It would be silly to recount the 34 song setlist (you can look it up here). Three albums’ worth of songs makes for a pretty grand night. The second set closed out with “Doctor Worm,” but of course the night wasn’t over yet. Two encores followed, the second one ending with “Fingertips,” a suite of 21 mini songs that was released on Apollo 18, because “we want to rock you all night,” as Flansburgh said. It had been nearly three hours since the show started, and this cram-packing in of a song was the absolute perfect ending.

It’s hard to imagine a world without They Might Be Giants, especially after taking in such a monstrously wonderful show as that at The Neptune. The band is full of consummate musicians besides Flansburg and Linnell. Beller is a killer drummer, while Dan Miller and Danny Weinkauf hold down their instruments with ease (guitar and bass, respectively). The addition of Curt Ramm on trumpet felt essential, and each musician was given room to take center stage. Linnell played several instruments including a contra alto clarinet, and soldiered on with his accordion even though it appeared to short out soon after he first took it up. This band is iconic, and it did so while not following any of the regular rules of popular music but by doing exactly what they wanted, when they wanted. They might be? No. They are.

Christine Mitchell has been poring over album liner notes pretty much since she acquired the skill of reading, and figured out the basic structure of rock songs at an early age. Whether it’s the needle popping into the first groove of the record, the beeps that signal the beginning (or end) of a cassette tape, or digital numbers ticking off the seconds from zero, music brings Christine happiness, ponderous thought, opportunities for almost scientific study, and sometimes a few tears. When she started attending live shows two decades ago, a whole new piece of the puzzle clicked in and she has been hooked ever since.
Related ItemsChristine MitchellFeatureJohn FlansburghJohn LinnellThe NeptuneThey Might Be Giants
← Previous Story Aaron Crawford’s ‘Hotel Bible’
Next Story → Fuzz Mutt Premieres “A Quiet End”