By Christine Mitchell on March 15, 2018@Housetornado37 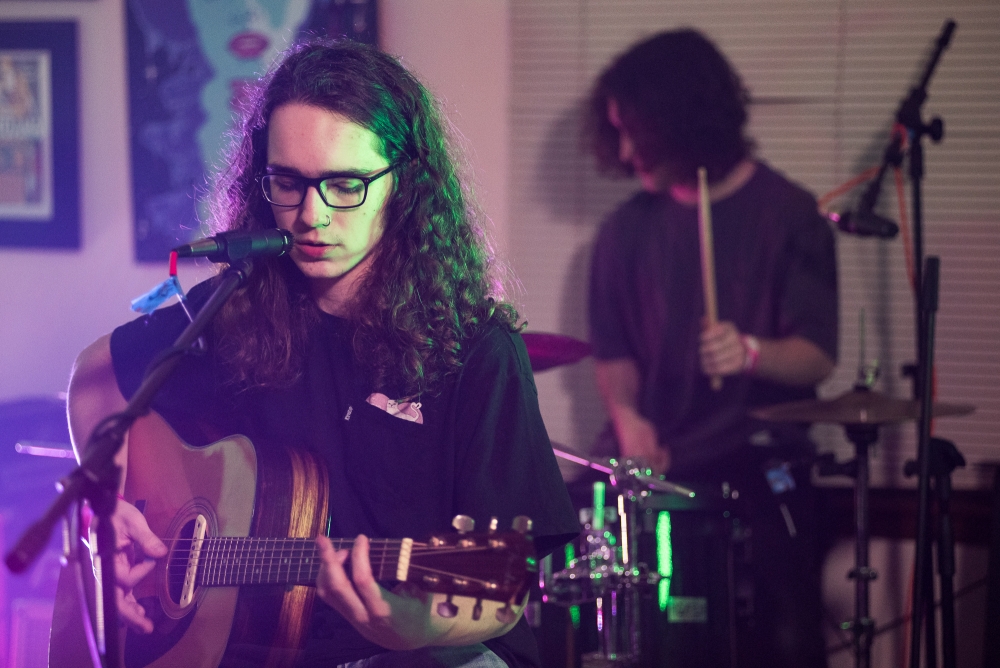 Acoustic performances filled the bill of this month’s Late Nights Podcast Last Call Showcase, but these weren’t your typical tunes sung over twangy guitar. The artists who performed were ones you’re far more likely to hear making lots and lots of noise, and definitely plugged in. The night was rainy and blustery, but inside, the intimate home setting was full of warm folks who knew each other well. Creatives from all across town had converged at Last Call’s invitation to take in the show.

The evening began with The Moon Is Flat, a band whose psychy jams usually rely on pedal effects and a lot of reverb. It was interesting to hear these same songs played without all of that jazz. Instead, pedal steel created that essential mental element without all of the feedback. The band changed up their songs to fit the situation; “Have You Seen My Glasses?” had a different ending entirely. The short set ended with “Long Enough,” Kirk Rutherford singing solo along with his acoustic guitar. It was direct, and it was emotional.

Narrow Tarot were a bit nervous, as this was their first official full-band show. But their surfy, quirky music was great fun. “Hangover” was a trippy, racing instrumental, while “Should’ve Seen This Coming” showcased the powerful combination of Tessa Tasakos and Trevor Fett’s vocals. Their harmony sounded like a snotty version of the Mamas and the Papas mixed with a little Dion. You can watch their performance of the song right here:

Midnight Lights weren’t quite acoustic, but we forgive them, because they are just so darned peppy. Kasey Peterson meedly-meedly-mees with the best of them, with impassioned vocals to match. Cole Ziegler happily canvassed the bass, all smiles. Midnight Lights’ songs are involved journeys. Take a listen to their EP “It’s Been a Year” if you enjoy epic, melodic punk music.

After a raffle drawing for a Skumbag Co. hat (won by fellow Only Everything podcaster Caleb Hirsch), Tyson Lee set up shop for a few songs. Lee is the lead singer and guitarist of Sleepwell Citizen, and their proto-prog grunge usually shakes the foundations wherever the band plays. On this night, it was a treat to get to hear these songs with all of the focus on Lee’s playing and his incredible, acid-drenched vocals. It was also a chance to get to really absorb the lyrics in a live setting. Songs like “Emily” are imbued with emotion every time the band plays, they were especially potent in this quieter setting. The crowd hung on every last note.

Kelsey Greenleaf is an Everett treasure. Most folks in town want to be her when they grow up. Greenleaf was a bit apologetic, saying that she hadn’t played in a while and had had a bad winter. You wouldn’t have known it, though. Armed with her acoustic, it was Greenleafs powerhouse, growling vocals that took the spotlight. She started off with Radiohead’s “Green Plastic Trees,” but her own songs had a lot more teeth and are worthy of closer listens. She closed with the Leadbelly classic made famous by Nirvana: “Where Did You Sleep Last Night?” And she was bound and determined to give Cobain’s take a run for its money.

Fuzz Mutt is a band on the rise. They’ll be hitting Fisherman’s Village Music Festival in a couple of weeks after wowing everyone at Rock The Boat last summer. The lead single “A Quiet End” from their upcoming EP, COLORLESS (out April 20th), just started melting earholes last week. With all of this hoopla going on around the band, it was the height of coolness to see these three musicians unplug and play a few songs in a way most folks hadn’t heard before. And it was pretty damn amazing. Max Stephens may have taken a little of the bite out of his vocal, but not much. It was still gritty and great. Sean Groda sat on a folding chair, his bass enveloped in a mass of hair and an oversized sweater. He looked for all the world like a young Yoko Ono, but his playing spoke more to the Seattle sound. Jared Hoidal kept his shirt on for once, reigning in the drumming just enough to not overpower the room. The potential energy felt almost like static in the room: Fuzz Mutt is a talented band just starting out, but the sky’s the limit for these guys.

The night ended with, what else? Poetry! Courtesy of Emma B. and David Calloway. The two traded lines and sentiments back and forth on death and family. The darkness of the material was met head on with levity. Those who stayed on past the musical portion of the night were rewarded with deep thoughts to ruminate on on the way home.

Clearly, Last Call is on an upward trajectory. The acoustic format, rather than making for a less intense show, was engagingly unique. Keep it up, guys. We can’t wait for next month.

Christine Mitchell has been poring over album liner notes pretty much since she acquired the skill of reading, and figured out the basic structure of rock songs at an early age. Whether it’s the needle popping into the first groove of the record, the beeps that signal the beginning (or end) of a cassette tape, or digital numbers ticking off the seconds from zero, music brings Christine happiness, ponderous thought, opportunities for almost scientific study, and sometimes a few tears. When she started attending live shows two decades ago, a whole new piece of the puzzle clicked in and she has been hooked ever since.
Related ItemsChristine MitchellEmma B.FeatureFuzz MuttKelsey GreenleafLast Call ShowcaseLate Nights PodcastMidnight LightsNarrow TarotSkumbagThe Moon Is FlatTyson Lee
← Previous Story DIRKSCHNEIDER Back to the Roots Tour coming to El Corazon
Next Story → Sleepwell, Sweet Apollo