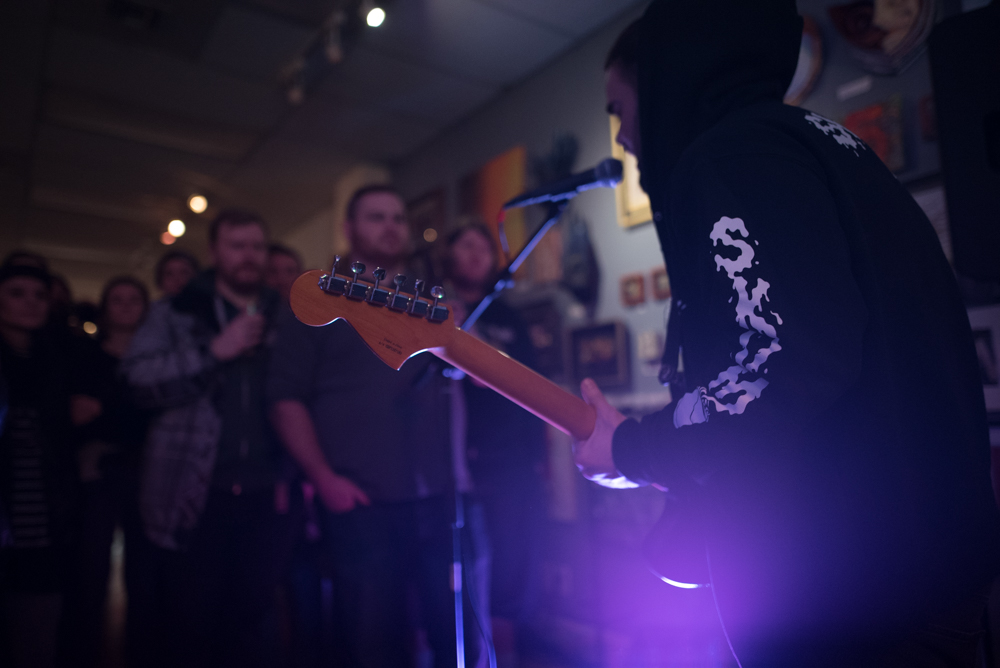 Have you ever been emotionally confused by a show? To feel uncertain as to whether you should be hyped for a rebirth or to reflect on the end of an era? On Saturday, March 3rd at the Black Lab Gallery, that is exactly how I felt. A confused sort of excitement. I knew going into it what was to come and had made sure not to miss it. There was this electricity hanging in the air, maybe imagined, but looking around it seemed a few others noticed it too. Hosted by the patron saint of Everett art and owner of the Black Lab, Isabella Valencia, with lights and atmosphere provided by Dada Fructose and support from Shokunin Media and Skumbag Company this was a stacked set of creators. They had gotten together to throw a benefit show to fund an all ages, dedicated music venue, The Rockitt. Even with only two bands on the line up they threw together a truly unforgettable night. Apollo and The Rockets headlined the show with Sleepwell Citizen as their support.

I have known the boys of Sleepwell for quite a while. Back in 2012, I had recently fallen into photography when a high school acquaintance reached out and invited me to his band’s show at Cafe Zippy in Everett. To be honest at that point I had barely ever been to any concerts, let alone a local show. I went to my first concert at 20 years old to what was technically a christian rock band (The Classic Crime). And to me, Everett was this dingy, dangerous city that I had no intention of ever hanging around in. Especially at night. So this guy I barely knew, four years out of high school invites me to a coffee house in an unfamiliar city, to do something I had never done before. Honestly, I was nervous.

This acquaintance was Joe Jarvis and this band was John Paul and the Apostles (JPATA), later known as Sleepwell Citizen. I caught the tail end of that show. Barely got any photos. I was nervous about blocking any of the maybe ten or fifteen people watching in that little cafe on Wetmore, across the street from where Funko would later set up shop. Those pictures were dark, grainy,  and I don’t even remember what I did with them. I met the rest of the band that night. Evan Smith on bass, still beardless and baby faced, Tyson Lee on lead guitar and vocals,  Joe on drums and Mike Greene on guitar. After that show we “accessed” the roof of a nearby parking lot structure and I shot my first band portrait session. It was definitely a night of memorable firsts.

Over the next few years I would get to shoot JPATA at venues all over the local Everett scene, from the now defunct Creatives Underground Theater to The Historic Everett Theater. In that time they tightened up up their sound, cut down to a three-piece, put out their first album, Emily, and changed their name. They have matured as artists and performers and watching it all has been a pleasure.

Sleepwell Citizen were in perfect form when they took to the stage on Saturday night, playing what may have been their best show to date. Maybe it was the meaning behind that performance, or simply the palpable energy of the crowd in front of them, but the boys were all in. “Double Helix” kicked off this progressive, grungy, filthy and completely beautiful set.  Launching into songs they’ve perfected over the last few years, Tyson’s voice ripped through “Thunderheart” and “Bliss Machine” as Evan and Joe brought their instruments to life and filled the room with glorious noise. Closing the set to raucous applause was their classic, “Emily”, a truly fitting close to an amazing set. The announcement that this would be their last show for the foreseeable future this performance was bittersweet. The crowd was shocked yet supportive of the band, holding hope that they would all be back playing again soon. Black Lab was at capacity and people were standing outside listening in on the party.

On this night of endings also came new beginnings. Apollo and The Rockets debuted their first EP, The Lunchroom Kids, a farewell tribute to their old moniker. This EP sets out to establish their first set of original songs and the overall vibe of the band to the public. These guys are the definition of a crowd pleaser. As much fun as their music sounds, it is their live act that has to be seen and experienced.  A massive seven piece band that seems to be continuously growing finds Aaron T. Hale on lead guitar, J.J. “Apollo” Magalinda leading on the mic, Justice Napeahi on drums, Colton King on bass, Sam Steele on sax, Demetreus Allen stepping in on keyboard and Sam Dobesh on guitar. They played their EP with multiple covers peppered in an almost freestyle jam session. “Wild by Design” and “Sextion” are playful romps that bring out the bands true charm. “Shallows” and “Jaded” are just plain sexy. Covering the likes of  Michael Jackson, Stevie Wonder, Prince and Bruno Mars, their repertoire was funky, poppy and an all around good time. Energy is key in their show. At one point Justice left his drums to simply dance along with the crowd in the far too packed Black Lab. Apollo and the Rockets thrive on the interaction with both the crowd and their members. Honestly, If they had a bigger stage they’d likely just take up the space with more band members.

This was the busiest I had ever seen The Black Lab Gallery. The venue has sold out shows before but not to the extent I’ve seen that night. The packed house only drew attention to the fact that a new larger dedicated all ages venue is desperately needed. Tony V’s Garage and The Anchor Pub hold more guests but they are bars. The Historic Everett Theater is massive but requires a lot to properly operate.  At certain points in the night people had to be turned away at the door and resorted to listening in the cold. The interest for The Rockitt is here. All that’s needed is the funds to make it happen for the flourishing Everett music scene.

To feel that amazing high of a band coming into themselves for the world and sharing their newest creations with it, while at the same time an old favorite announces that this may be the last time they’ll be playing for you. That first night in 2012 ended up meaning more to me than what those guys could have anticipated. More than I could have thought. It inspired me to pursue photography and to keep covering these shows. To push through a depression that had taken over so much of my life at that point. To give me a skill and an outlet to channel myself through. Ben handed me a camera, Alex taught me how to write (or at least tried),  and JPATA gave me something to shoot.  These concerts have become one of my great passions and pleasures. Everett has turned into a city with a burgeoning art scene with more and more bands, creators and venues popping up everyday. It is a place where I enjoy spending my time in. With Joe moving to Australia for the next year, Evan living the blissful road-tripping married life and Tyson always on the prowl for that next project. Sleepwell Citizen is in limbo. But this will not be the end. Music is in their soul, it is part of their calloused flesh and weary bones. It is in every drop of blood, sweat and tears they have spent on perfecting their craft. and it will never stop calling to them.

With the utmost gratitude to Evan, Joe and Tyson,

Whether as an apostle or a citizen,