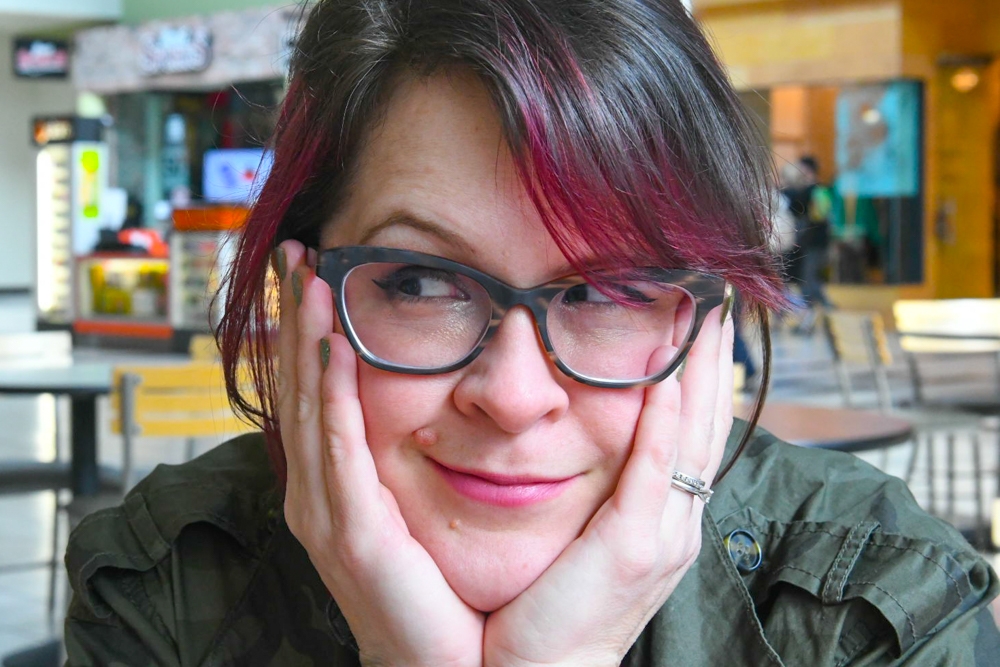 The Hot Seat is an interview series by contributor Matthew Lamb.

The Hot Seat this week features Seattle Music Insider’s very own editor, Christine Mitchell. Christine is a photographer and writer based just north of Seattle. Heavily involved in the local music scene, Christine seeks out new, raw talent, discovering unique sounds and bands that many people would often overlook. Her style is focused on putting the reader into the moment and encompassing the music and band, so that you feel like you were there. Christine has photographed bands in arenas, small clubs, recording studios, and even a nuclear cooling tower. From festivals such as SASQUATCH! Music Festival, Everett Fisherman’s Village Festival to special NYE shows, Christine has been there and shot it. Christine is also an audiophile with a stellar vinyl collection.

Here are what some folks had to say about Christine:

The band Oliver Elf Army of Everett, Washington: “You know on cop shows, when they put up photos of mob guys or victims or whatever? Bands are the photos and Christine is the string that connects them all. Her enthusiasm and love of music are plenty on their own, but combining that, with an eye like that, and the technical prowess to capture what that eye sees, and the fearlessness to get down amongst it to capture those shots. It’s really quite breathtaking. It’s bonkers. We love her because she loves what she loves and she is 100% for real. She has music in her bones and blood and we are so lucky to have her documenting Everett music.”

Molly Sides of Thunderpussy: “Let me just start with the fact that Christine Mitchell is a mega treasure to behold! She is not only an incredible photographer but an extraordinary human. How she juggles life as a mom, avid art goer, and photographer is mindboggling. We’ve been so lucky getting to know her over the years especially from the unique perspective of her lens. She has an uncanny way of capturing the most exciting, candid, fun, bizarre, real moments on and off stage. I’m pretty sure she has a magic cloak or something as she appears and disappears just as easily. She is like an erupting volcano of talent in a nimble elf’s body. Thank you, Christine, for continuing to share your creative brain, sharp eye, and quick wit with every shot.”

Kirk Rutherford of The Moon Is Flat: “I consider Christine’s opinion to be worth double its weight in gold. But maybe I’m biased. Anyone who can suffer through my numerous freak outs about the recording sessions or losing a band member has some patience. I know she’s just a message away. When it comes to her craft…..the girl can take some KILLER photos!! Whenever I see that she is taking pictures at a show I’m playing is almost impossible to be a bad show. Her words are even kinder. The platform that she has provided for our music is priceless. She’s genuine and truthful, so I always know I can play her the recording session or riff idea and she’ll be straight with me. Without her this scene would be a lot less joyful. And there wouldn’t be a proper replacement.”

Kyle Ledford, CEO of Soniphone Records: “Christine Mitchell’s impact on the Everett music scene is hard to put into words. She is the window into our community. Through her lens, these images tell our stories. Stories big and small, and she communicates them in a language that words can’t define. I feel that Christine is not just a part of our community, but she helps define our culture through her kindness and her gracious, friendly, and honest demeanor.”

What led you to first discover the scene?
I first discovered the Everett scene in 2014 as a writer working for SMI with Arlene Brown; we were invited to an intimate basement recording studio show for a band called Born of Ghosts. Ryan Crowther and Steven Graham, who started the Everett Music Initiative, had us come out to cover. It was there that I met so many great people that are still active in the scene today. It’s been fascinating to see folks like Kyle Ledford, who runs Soniphone Records, grow from utilizing others’ recording studios to building one of his own. And not only that, but cutting vinyl in house.
The Everett scene is a gorgeous, inclusive microcosm. There is rap, reggae, indie, rock, punk, electronica, folk, prog, country, psych…you name it. Everett can basically do everything in-house; there is a record label (Soniphone), there are poster/album art designers (Alexander Vincini, NODRA), audio/lighting engineers (Dada Fructose), hyper local radio (KSER), and podcasts (Only Everything, Late Nights, Live In Everett). There is also a dedicated fan base, and everyone knows each other, so there is a lot of hugging going on. Right now there is a grassroots effort led by Isabella Valencia of Black Lab Gallery to open a new music venue in town called The Rockitt. Also, parking is almost always a breeze.
So being able to work within, document and support the community is very heartening. The scene has a fierce pride behind it. What is happening there is important to the people who are there. It isn’t necessarily about growing up and out of town. It’s about making things awesome right where you are.

What would you like to see for the future of the local scene?
The future for Everett is wide open. I have great hopes for The Rockitt; the town needs a venue that can cater to all types of different shows including all ages. I’d like to see more Everett bands creep their way up to the top of the Fisherman’s Village Fest lineup, like Fauna Shade did a couple of years back, and also get into Upstream. And I wouldn’t mind seeing a bit more success for the talented folks up here. They deserve it.
I also love that Everett is age inclusive; there are underage bands as well as bands made up of folks my own age, and they all hang out together. I don’t feel like a three headed, middle age monster in Everett. I’m just another human. Ha! Oh! Also. One of my favorite things is that Everett has its own style. Henry J. of The Stereo Wire has released several t-shirts to promote his radio show and they can be seen en masse at any Everett gig. Or a band like Oliver Elf Army will release a song called “Black Nikes,” about the Heaven’s Gate mass suicides, and suddenly everyone in town is wearing the same damn shoes. When Crystal Desert played their last show, they requested that everyone who attended wear black. AND THEY DID. There is a real sense of playfulness about it. But then the best political/protest music I’ve heard in the past two years has come out of Everett. So there are two sides to the coin.
But really, I think that the scene will grow simply due to the fact that musicians are being priced out of Seattle along with everyone else. Everett musicians are gaining more visibility (KEXP is sponsoring this year’s Fisherman’s Village Music Fest) and starting to garner interest from outside of town (Erik Blood has been getting involved with Soniphone Records).

What’s your favorite record store and why?
I have two. Lost In The Groove in Mount Vernon is great because it has a wide selection of older used records and pricing that doesn’t break the bank, especially when it comes to the huge selection of $1 45s. And Sonic Boom in Ballard has a great used/new selection as well as another well-stocked selection of 45s. I’m really into 45s right now. Can you tell? Honorable mention to Everyday Music on Capitol Hill (I just don’t get to play in this one enough).

What is your best find?
Probably my favorite isn’t too terribly hard to find these days, but as a kid I remember going to the used record store with my mom, trying to find Badfinger’s Straight Up, which was long out of print. It was a huge deal when it came out on CD. Anyway, about three years ago I finally found a copy on vinyl and I was soooooo elated. The name “Jim Bradley” is written on the cover and I send him a blessing every time I listen to it. Either that or I call him a dummy for giving up a great album. It depends on my mood. …I mean, I have lots of cool records, even a square record. But it’s the hunting that is my favorite part of it all.

Tell us about your love of the band Thunderpussy.
You know, I feel like we’ve been able to watch each other grow. I started photographing bands soon after Thunderpussy started, and I’ve not only been able to document many of their “firsts,” but they’ve been firsts for me as well. The lead up to their first performance at Capitol Hill Block Party was the subject of my first photo essay, their first time on the main stage at SASQUATCH! was my first time shooting side stage, and their first time in a nuclear cooling tower? Mine too. Ha! And honestly I’ve just grown to love these humans as I’ve seen them morph into PNW superheroes. It’s been amazing to have been able to be a fly on the wall for their ride so far. I did a photo show as part of their NYE extravaganza at The Showbox, and it really hit me as I hung photos on the wall just how fortunate I’ve been to have the opportunity not only to document one band over an extended period of time but also to have these people as friends. Molly, Whitney, Leah, and Ruby are authentic, kind, and crazy talented. I love them. They push me out of my comfort zone and I appreciate that.

You got to photograph SASQUATCH! Music Festival, tell us about that.
SASQUATCH! is so insane. I’ve only ever experienced it from a working perspective, and I’m not sure what I would do with myself if I was just there to goof off. But then again, my idea of fun is working my ass off to make other people look cool, and SASQUATCH! is sort of the epicenter of being able to do that. Most of the time you’re running around like your hair’s on fire. But I always try to take time to really take in the bands I love and to appreciate the incredible setting that is The Gorge. There is nothing like it. Plus I get to hang out with you and take pictures of you sleeping. Which is a hoot.