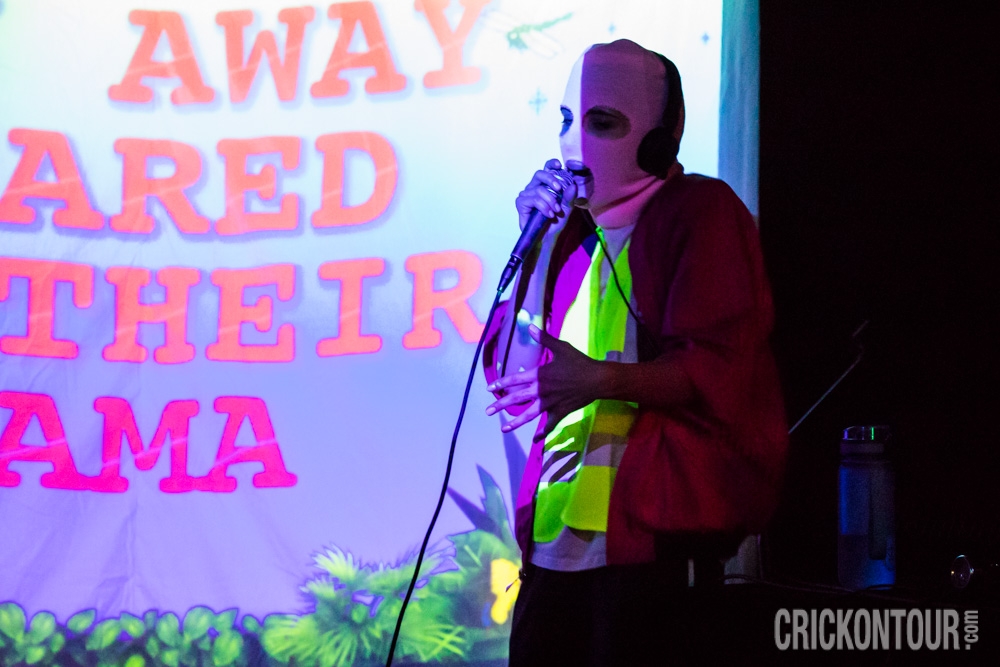 Pussy Riot isn’t a band. They’re activists, educators, screamers, video producers, protesters, and performance artists who only recently started doing this music thing (their words). And the most important thing to know about Pussy Riot is that, well, anyone can be Pussy Riot.

And that’s really true. Although their performance on Thursday, March 22 at Chop Suey was theoretically helmed by activist and artist Nadya Tolokonnikova, one might never know, as she and her DJ partner wore masks and performed in near-darkness. It’s not exactly a surprise that Pussy Riot members would want to keep their identity a secret, considering about a third of them, including Tolokonnikova, have been imprisoned by Vladimir Putin’s regime for “hooliganism” – by which they mean performing anti-religious and anti-authoritarian art pieces in Orthodox churches.

The show itself was a mix of technicolor gym shorts, Youtube video backdrops, and lots of anti-Putin, anti-Trump, and anti-police state language. Indeed, the Youtube videos feature a good deal of what grown-ups might yell at kids to get off their lawn for. It was NSFW, but after the last year or more of watching our own authoritarian regime rise into their capitalist kleptocracy, being at the Pussy Riot show was like being at the Women’s March on steroids.

The set was short, but featured fan favorites like “Police State,” “Bad Apples,” “Make America Great Again,” and “Elections”. The show closed with a punk rock celebration of vaginas, the matriarchy, and a proclamation that “Vagina is the new dick” on a candy-colored flag waved around. Surrounded by ladies yelling “Don’t play stupid, don’t play dumb, where’s your vagina really from?” was enough to make this reviewer want to burn all her bras.

Probably the best thing about a Pussy Riot show is the inclusiveness. The collective are activists who demand education, housing, and justice for all. Simple, good things against a scenery of fun that literally anyone can join.

Meredith Smith is a writer in Seattle, whose musical roots date back to mid-90s ska and punk shows. She writes about the intersection of politics and music, as well as upcoming shows and Seattle events.
Related ItemsAlex CrickChop SueyFeatureMeredith SmithPussy Riot
← Previous Story Vendetta Red Record Release Show at Real Art Tacoma
Next Story → Sleepover Club’s ‘My Other Dad Is Your Ride’