The Darkness and Diarrhea Planet: raucous at The Showbox 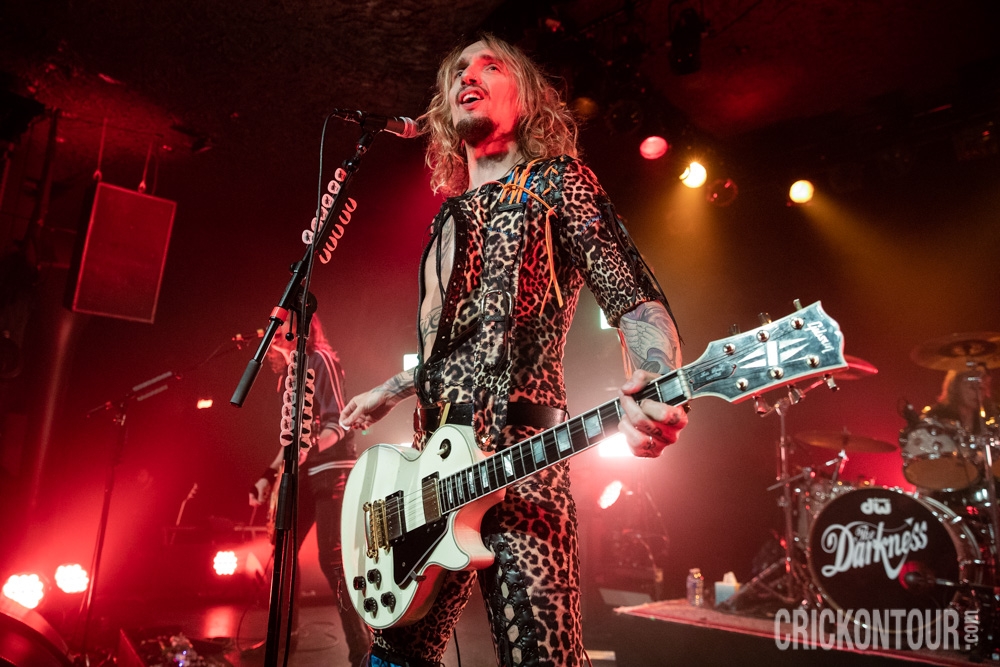 The Darkness at The Showbox (Photo by Alex Crick)

Starting off this exciting evening at The Showbox was Nashville party rock band Diarrhea Planet. Their booming sound synced up well with their high energy performance. The band’s four guitarists paraded around the stage striking poses, playing pranks on each other, and generally having a great time. At one point guitarist Jordan Smith leaped into the crowd and surfed atop the audience, much to the crowds enjoyment. Over the course of their all too short performance the band had captured the audience’s attention and made a ton of new fans.

After a brief pause The Darkness came out, to a thunderous cheer from the crowd. The band looked dramatically different from Diarrhea Planet. The lead singer Justin Hawkins was dressed head to toe in a leopard print jumpsuit, while bassist Frankie Poullain wore a leisure suit and sported a giant afro. Guitarist Dan Hawkins looked a little out of place with his standard tour jacket and jeans but didn’t seem to mind as the band launched into “Open Fire” from their 2015 album Last Of Our Kind.

Hawkins had no problem showing off his swagger as he paraded around the stage. The band’s antics proved to be over the top, and their natural playful style topped even Diarrhea Planet. As the band played one could not help but notice as drummer Rufus Tiger Taylor gave the drums some hardcore treatment. It was amazing that the kick drum didn’t just fly off at some point into any of the giant stacks of Mashall amps piled across the stage. The band played a solid selection of songs from their latest album Pinewood Smile as well as old favorites from Permission To Land. As the set went on, the crowd discarded various items towards Justin’s crotch area, including multiple bras. At one point a leopard print bra appeared before him and his reply was to swing it across his back triumphantly. Musically, Hawkins’ voice was as solid as ever, hitting the highs and lows while displaying a ton of energy with each song. The show felt a bit more grounded once Hawkins picked up a guitar, but even that didn’t stop him from licking the tuning knobs in a suggestive manner.

Antics were plentiful during the show. During a guitar change Hawkins decided to up the ante and engage himself in a bit of a challenge with the disco ball in the center of The Showbox. The goal was to hit it with one of his guitar picks (many of which he dispensed of over the course of the evening). It took him about three tries, but the crowd loved it. The band played many of their hits including “Friday Night,” “Love is Only A Feelin,” “Stuck In A Rut,” and the crowd pleasing “Get Your Hands Off My Woman.” The set finished with “Growin On Me” from Permission To Land.

During the break Justin changed into a classic Seattle workout uniform featuring a Sonics t-shirt and Sonics hat, complete with an authentic ponytail and tiny 70’s era shorts. It was quite a dramatic change but it seemed to boost his energy to be freed from the constraints of the leopard print jumpsuit. Without missing a beat The Darkness tore up the stage with “Japanese Prisoner of Love,” which was filled with numerous rockin’ guitar solos. Finally, “I Believe in a Thing Called Love” became a sing-a-long as the band closed the show.