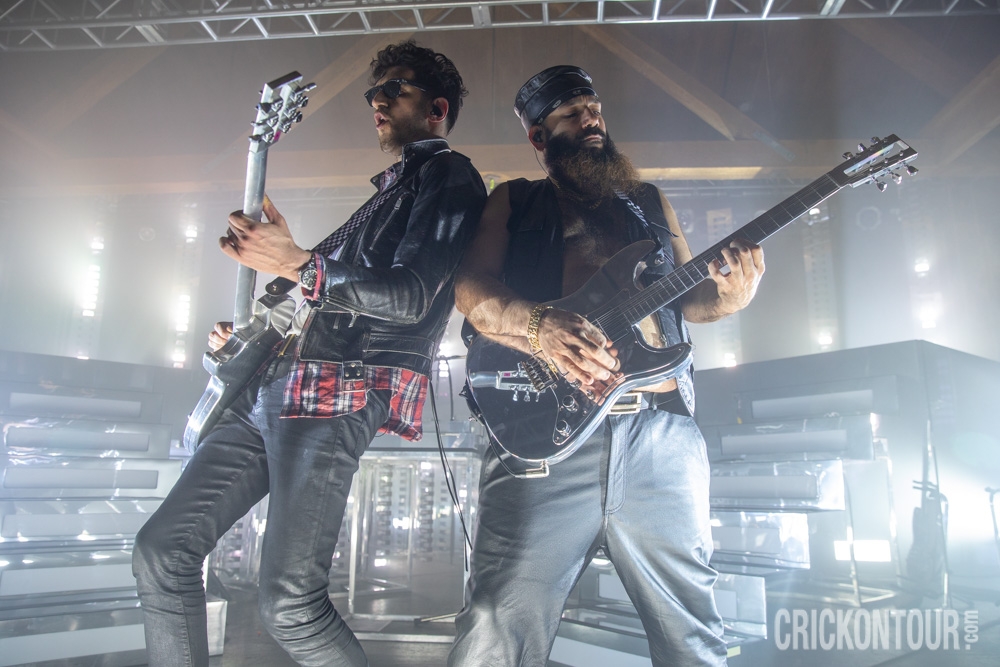 Chromeo at the Showbox SoDo (Photo by Alex Crick)

“What’s up, Seattle!” Dave 1 exclaimed in his robot voice.“ “You have no idea how good this feels. We have not seen actual human beings for two years!” To most, this would come off as hyperbole, but to Chromeo fans present at their April 4th Seattle show at the Showbox SoDo, such a statement was not beyond belief. The sometimes-robotic, always-funky duo have been consumed by working on their follow up to 2014’s excellent White Women. Although it hasn’t seen official release yet, Seattle fans were treated to four new songs from the Canadian electro-funk duo’s forthcoming album Head Over Heels, including the instant crowd favorite “Juice,” a deliciously infectious pop tune full of licks and kicks, and “Must’ve Been,” self-declared as the group’s “funkiest shit.”

At their best, Chromeo infect audiences with an overwhelming desire to dance, and if the crowd at the SoDo was any sign, Chromeo crushed it on Wednesday night. As they launched into their 2014 hit “Come Alive,” the entire venue seemed to bounce with elation, as P-Thugg’s groovy synthesizers cast a spell on the audience. During the band’s rendition of “Over Your Shoulder,” Dave 1 art directed the audience. After exclaiming, “Let me see more of you standing on shoulders for this one,” about 20 ladies (and a few dudes) climbed on their strong-shouldered friends and neighbors and danced to this one while enjoying the view from 20 feet above, looking as graceful and gleeful as stilt walkers in a May Day parade.

Beyond their ability to create groovy pop tunes, part of the draw of Chromeo is their dynamism as an odd couple. For the most part, Dave 1 and P-Thugg stood on opposite sides of the SoDo’s expansive stage, content to groove in their zones and use the slick plexiglass platform stairway as a runway. When they interacted physically, though, things really heated up. Their characteristic moves—snuggling up back to back and crossing their guitars together—elicited a roaring response from the audience. The former college classmates are a study in contrasts; Dave 1 tall, limber, and glamorous in his leather jacket, form fitting pants, and sunglasses, while P-Thugg’s style might be described as Harley Davidson meets 90’s hip-hop. I couldn’t help but place them among other odd couples who are synthesizer/ funk inclined, like Daft Punk and Gnarls Barkley. I also heard some similarities to not-so-odd-couples Ratatat and Jungle sprinkled into their sound, and maybe even a little bit of Mannheim Steamroller when the synthesizers were at peak drama.

In addition to the crystalline set onstage, Chromeo also brought quite a sparkling light show in the form of a series of a dozen or so vertical beams that contained enough lumens to make me regret leaving my sunglasses at home. The lights strobed energetically on and off throughout the 75 minute-long set, and from time to time, reflected off our nu-disco heroes’ guitars into the audience like a beaming disco ball at Studio 54.