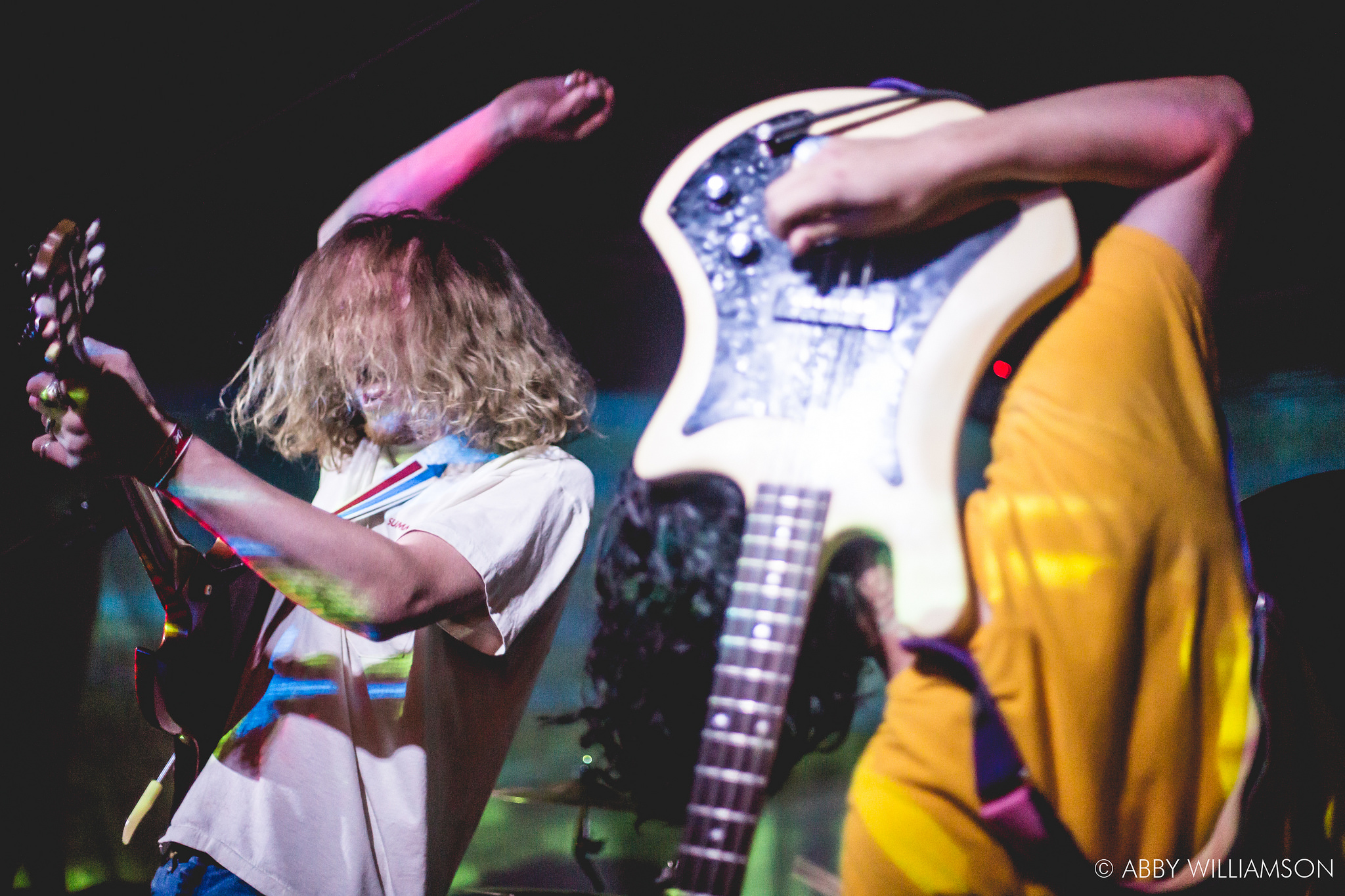 There are few young bands in Seattle that hustle like Naked Giants do. For a band that – in its current lineup – is just shy of 4 years old, seeing the sheer amount of stuff they’ve done is both inspiring and also the kind of thing that makes almost-30-year-olds feel inadequate about it.

With the release of their debut full length SLUFF, Grant, Gianni and Henry embarked on a national tour, and will soon be on a world tour with buds Car Seat Headrest. Do they ever sleep? I’m not quite sure.

To kick off this summer of shows, the three piece headlined a release show at Chop Suey, with creative partners The Fabulous Downey Brothers and frequent bill comrades The Black Tones opening the show. And they sold it out.

The Black Tones kicked the show off perfectly, with their blunt and fast-paced afro punk. The matter-of-factness of the songs juxtaposed with the overwhelming charm of twins Eva and Cedric Walker never fails to put a smile on my face. And trust me, they’re as nice off stage as they are on stage. Definitely the best new song in their set is one that KEXP has been spinning a ton this month, the Jack Endino-produced “The Key of Black (They Want Us Dead.”

The Fabulous Downey Brothers were up next, bringing their weird and wonderful brand of…whatever it is you could call what they do. Each keyboard was sporting an identical screen to playback corresponding visuals to each song, which added another element to the already mind-bending aesthetic of this group. It was nice to see that they were on this lineup, after seeing the three music videos that Sean Downey directed for Naked Giants (all of which was amazing, by the way).

Now at this point Chop Suey was filled to the brim. They’ve been getting great shows lately, and this particular evening was no different. All smiles, Henry, Grant and Gianni took the stage. They started with the banger “Easy Eating,” and by some miracle of youth, they didn’t slow down. With hit after hit and mosh pit after mosh pit, the all ages crowd was having the time of their life. In between one of the songs Gianni had to take a minute to proclaim to the room, in not these exact words, “We love that you are all dancing, but just make sure to not touch anyone if they don’t want to be touched.” As someone that started going to shows at 19, I never remember having so many bands be so considerate to people’s personal space as to tell everyone to cool it. Thank you, young bands for being pragmatic and calling people out.

After playing through virtually all of SLUFF and then some, I’m pretty sure they could have kept going for another hour, but alas – Thursday night curfews.

SLUFF is out now, on a bright flamingo pink vinyl, or on Spotify if you’re hip to the online streaming. You really should check this one out – Steve Fisk produced it! THE Steve Fisk!

Also you can see Naked Giants with their bffs Car Seat Headrest at Timber! Fest this July.

Abby Williamson is a photographer, writer, and video blogger with a passion for live music – especially the local scene. She recently moved to Seattle after commuting from Gig Harbor for shows an average of once a week for five years, so she’s happy to not have to drive as much and photograph even more concerts! When she’s not elbowing her way up to the front row at a show or sorting through thousands of photos of those shows, Abby also does freelance wedding photography, all the while cultivating a decent-sized following on YouTube. Abby has contributed to several music blogs over the last five years (and she’s really excited to join the SMI team!), and has been published in at least one album booklet for the band, Someone Still Loves You Boris Yeltsin. She would like people to know that while music photography and writing is a huge passion in her life – she is a fan first, photographer second.
Related ItemsAbby WilliamsonAlbum ReleaseCar Seat HeadrestChop SueyConcertconcert reviewFeaturegianni aiellogrant mullenhenry lavalleejack endinoKEXPLocal MusicNaked GiantsNew MusicReviewsean downeysluffsteve fiskthe black tonesThe Fabulous Downey Brothers
← Previous Story Fuzz Mutt’s ‘COLORLESS’
Next Story → Fifth Fisherman’s Village Showcases Everett Bands and Beyond