By Christine Mitchell on May 1, 2018@Housetornado37 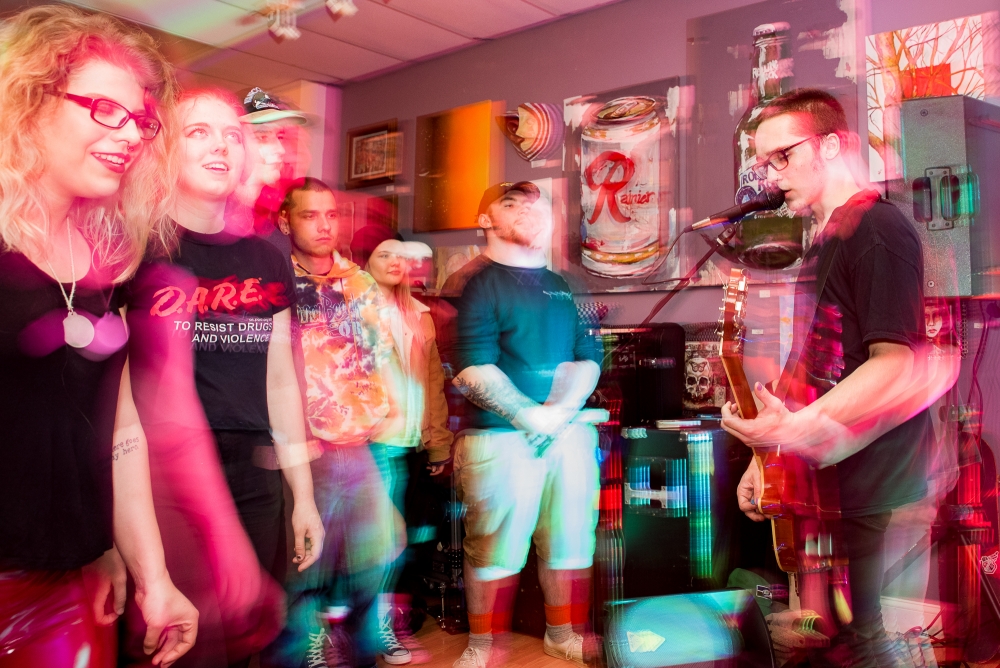 What follows is a firsthand account of Fuzz Mutt’s release show for their debut EP, COLORLESS, at Black Lab Gallery in Everett. It must be said that the author was under the influence of margaritas at the time, so things might be a bit furzy.

We ambled on over to Black Lab and stood in line outside with Scotty from Fauna Shade, and I told him I was mad at him, but I still loved him. We went inside and got a couple of drinks (I got a mojito in a can. I know), but only after seeing some favorite folk who had traveled up from Seattle. Eric Luck and Jake Hanson have been doing excellent photography work with Monsterwatch, so it only made sense that they would come up. But my margarita-ed self was extra happy to see them. I was basically hugging my way around the room all night in between taking photos. I was feeling friendly.

I had just enough time to sling my gear on for Sleepover Club. Although I’m not sure, time was weird. Anyway, each time I take this band in my heart gets bigger. They are DIY in every sense, and they’re understatedly fierce about it, which I appreciate immensely. Their music is undeniably messy and almost universally goofy, but with an undertone that pokes at stereotypes like a forked stick. They sing about how ugly bugs are and also about improv actors. They sing about dads in sandals with socks on who are homophobic. They print and sew homemade patches, and silkscreen one off t-shirts (one that tickles recent memory said “FUCK FART”), or pick up a used harmonica and try it out at their show the same night. Sierra, Katee, and Sid are like a punk Punky Brewster; all sunshine, but with a safety pin through her nose. And their show on this night? Tight.

Admittedly, the stage at Black Lab is tiny, but it was fun to watch Monsterwatch build a barricade of amps and such out onto the floor. It was obvious that their plan didn’t include standing still. My buddy Jake let me borrow a gadget of his that was a cross between brass knuckles and a suncatcher that made my photos go all swirly. It was a good pairing with Monsterwatch’s music, which is punk with a huge helping of psychedelia. John Spinney and co. have toured a fair amount in this past year, and it has them sounding their best yet live. Their latest release, ZOT, is hard, weird, and great. And recommended. There was a lot of hair flinging on this night, by both the band and the crowd. Monsterwatch ended their set with one of my favorites of theirs, “Alright Now,” all thuddy swagger and acidic vocals, and I stopped popping my flash in folks’ faces to toss my own hair around for a hot minute. I think that Everett and Monsterwatch have a love/love relationship.

Trippy visuals were in play for Fuzz Mutt’s performance, and they were inspired by NODRA’s stunning album art for COLORLESS, specifically the cover for the second single, “The Doubt.” A swirling spiral of nail polish bottles daubed the band members’ faces, making them look at times as if they were wearing insane warpaint.

Fuzz Mutt are as straightforward in their garage-grunge as Sleepover Club are zig-zaggy in their garage punk. Frontman Max Stephens didn’t waste a lot of time on banter, preferring instead to dial down into their music, which is downerly delicious. But the mood was still upbeat. I even saw bassist Seann Groda crack a few smiles, and that’s saying something. Drummer Jared Hoidal was particularly entertaining to watch. As he plays around Groda and Stephens he’s constantly locking into their riffs with his eyes, and it’s intense. This was particularly in play during “Life In A Jar;” Hoidal’s fills fought back tooth and nail against Stephens’ swirling guitar squawk to great effect. The crowd stopped just short of moshing, which is probably a good thing (I danced to this one as well). When moshing happened here at The Fisherman’s Village Music Festival last month, shit got broken.

All in all, Fuzz Mutt were in fine form. They’re ready to take on Band In Seattle on Thursday May 10th (you can get tickets here) along with fellow Everetteers Oliver Elf Army. As for myself, I went home a little disheveled. But I had to drive home. After all, it was my husband’s birthday, and he had had margaritas, too.

Christine Mitchell has been poring over album liner notes pretty much since she acquired the skill of reading, and figured out the basic structure of rock songs at an early age. Whether it’s the needle popping into the first groove of the record, the beeps that signal the beginning (or end) of a cassette tape, or digital numbers ticking off the seconds from zero, music brings Christine happiness, ponderous thought, opportunities for almost scientific study, and sometimes a few tears. When she started attending live shows two decades ago, a whole new piece of the puzzle clicked in and she has been hooked ever since.
Related ItemsBlack Lab GalleryChristine MitchellDada FructoseFeatureFuzz MuttMonsterwatchNODRASleepover Club
← Previous Story Fifth Fisherman’s Village Showcases Everett Bands and Beyond
Next Story → Full House With The Fratellis