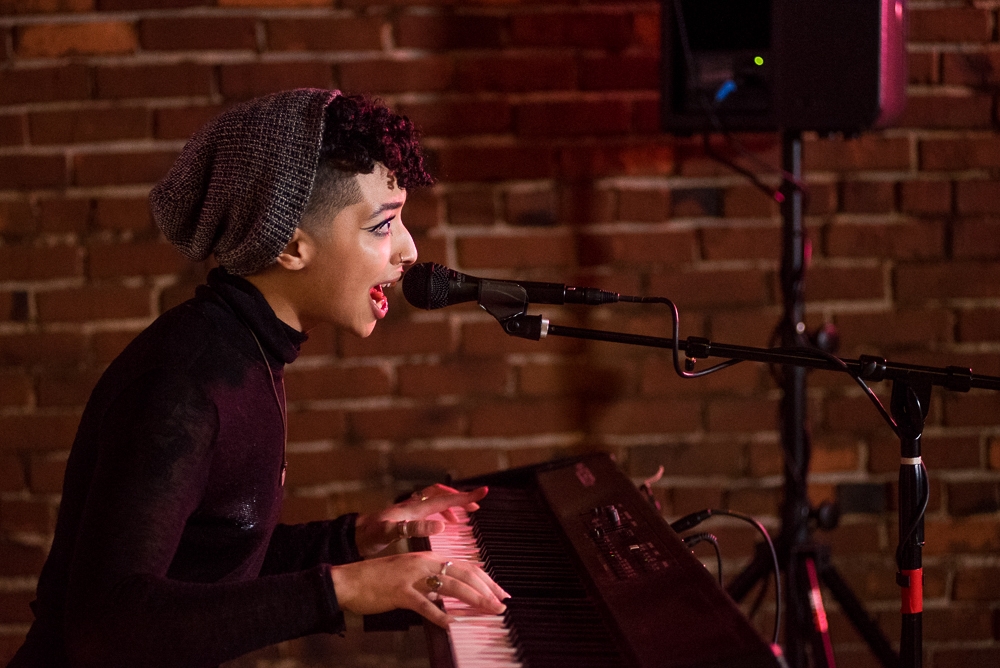 Late Nights Production Podcast, Last Call Showcase, Skumbag Company… I don’t know what the hell these kids do but I can tell you they don’t stop!!! What started as a podcast turned into a monthly intimate house show, and now they search out Everett hot spots to highlight more local talent! I’m pretty sure sleep and free time is not on their agenda.

May 4th marked the fourth Last Call Showcase which turned their sights on two incredibly talented solo artists, Rio Chanae and Tyson Lee (Sleepwell Citizen). Late Nights morphed Narrative Coffee into a venue which would make Jazz Alley jealous. A polar bear rug and elegant lights served to soften the interior of the world-renowned coffee shop. A craft cocktail bar was provided by the ever so classy Revolution by the Barrel.

After we entered through the alleyway door instead of the front entrance, like some secret underground sophisticated society, we were promptly greeted by complimentary tacos provided by Sol Food. As we walked around the corner and looked west, a single white stool and a lonely microphone sat at the front of the coffee shop window with the Late Nights logo projected on the brick wall.

The MC took the stool and softly announced the compelling Tyson Lee.

For the next 45 minutes, I watched his veins bulge out from behind his beard all the way up his temples as he persuaded the strings of his guitar to bleed sorrows and confusion hidden behind the agony in his lyrics. It was hard to comprehend what to empathize with more, his rhythmic upbeat pace on a tuned down guitar or the painful harmony behind his soul cry used in vocals. His performance was remarkable and heart-staining to state the least.

Needless to say, we all needed a breather after his set.

Only a brief amount of time passed before a keyboard was placed in front of the mic and Rio Chanae took the bench. If there is any doubt that the true definition of soul music is still alive, it lives in Rio. I have yet, to this day, heard anything as dynamic as her passion expressed by vocal chords since the days of Etta James. I was wiping away the tears as she sang her heart out and charmed the crowd with the softness of her piano.

The crowd did not have enough of Rio as she ended her set. She nervously stood up, gave the crowd a warm smile and by the time the MC announced the end of her set, the crowd was chanting her name and begging for more. Flattered and shocked, she donated her soul for one more track.

Everett is now beyond an up and coming artistic city,  and it has earned its clout with diligent talent and the care that artists and promoters show for one another. It’s only uphill from here!

Yes… the boys of Late Nights can identify talent and throw a show, alright! If you haven’t caught one yet, you are missing out!!! You can also check out their podcasts at Late Nights Production Podcast found online or in any other podcast format. They’re normally equipped with no agenda and plenty of barbiturates.