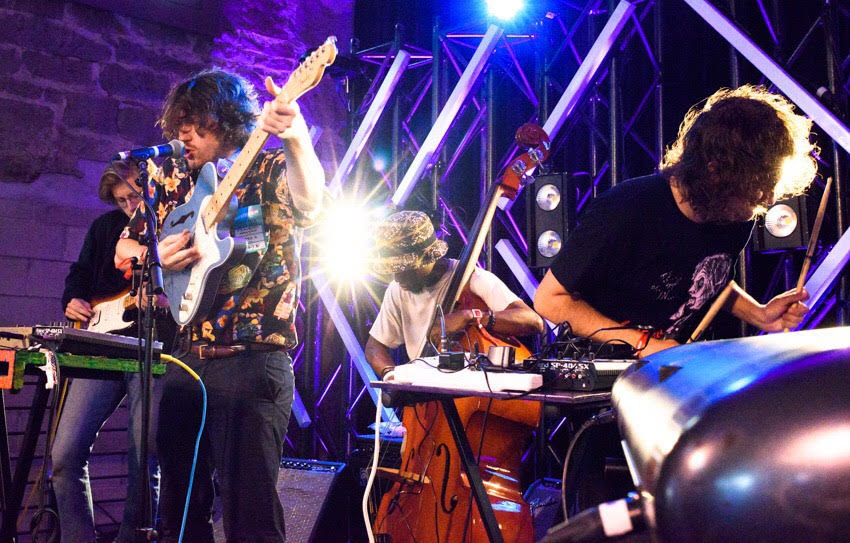 Strawberry Mountain, the rising electro-space-avant-pop group, are a quirky bunch of folks. So quirky, in fact, that their never-ending slew of singles, albums, and EPs somehow captures a new, unexpected style almost every time. If you might think you have them pegged, their latest track, “Double Summits,” will subvert your expectations. This second single off their upcoming album, Rebirth, covers mostly rock territory, with a splash of Strawberry Mountain’s dance-y flair.

The song gets right to business, as a contemplative, almost worried bass line rides upon fragmented and engaging drumming (played by Jonathan Dugger and Grant McGilberry, respectively). Barely-there synth tones add an almost imperceptible eeriness to the opening moments of “Double Summits,” while the lead guitar’s hurried, distressed picking only increases the song’s anxious feeling. When “Double Summits” takes off at a mere forty seconds in, a sense of urgency fills the listening space, as the guitar’s notes continue picking wildly. There is a satisfying unity between the guitar, drums, and bass, each of the instruments seemingly joined at the hip to the other – perhaps suggesting to the listener that navigating such busy and complex arrangements requires an intense focus and unwavering tightness, absolutely found here.

Carter Prince’s quivering voice is a youthful mix of Avey Tare (Animal Collective) and Nick Thorburn (The Unicorns). The chorus of “Double Summits” is perfectly groovy and puts emphasis on the upstrokes, creating an indie-pop energy that would suit any of the dance moves featured in The Breakfast Club, albeit in a much more melancholy fashion (maybe think “goth kids from South Park”). Prince recalls how the song was constructed: “‘Double Summits’ is our most stripped down song to date. It was recorded in Anacortes live as a drum, bass, and guitar trio, with overdubs on vocals, 2nd guitar and a synth. It was written from a jam between Jon, Grant, and [myself] over what would become the main vamp of the song, with only the changes in the bridge being arranged after. The song is an ode to the towns of the Pacific Northwest and the highways and roads that connect them.”

When a band defies, almost even foregoes genre in favor of defining themselves by their own pure sound, they’ve struck sonic gold, and Strawberry Mountain have done just that. Their new album Rebirth is set to release on September 14th, via Youth Riot Records. Check out the new track on Bandcamp.

Paddy Moran is an active musician and participant in the bustling Seattle music scene. When not discussing his extreme distaste for eggs (any style), Paddy can usually be found fumbling around, looking for lost personal items and accoutrements. Have you seen his backpack? It was right here a minute ago; someone must have moved it. In his personal life, Paddy requires almost constant, near-24/7 audial stimulation, which explains both his undying love for new music and why he won't just stop talking already. Oh, there's my backpack. I mean his.
Related Itemscarter princedan bracagliadouble summitsFeaturegrant mcgilberryjonathan Duggerrebirthstrawberry mountainUpstreamUpstream Music Festivalyouth riot records
← Previous Story ‘Garbage People’: An Interview With Wimps On Their New Record
Next Story → Brooke Annibale Brings Her Heartfelt Pop To Seattle