By Arlene Brown on September 9, 2018@brownfotobug 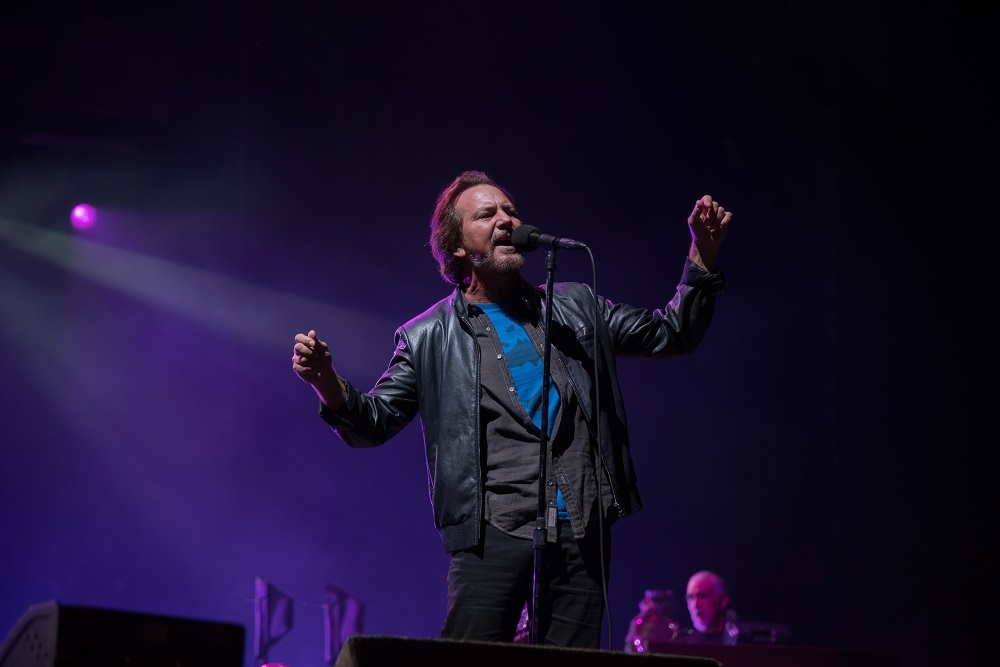 I’ve found myself in music venues that underwhelm, disgust, inspire, motivate, and wow me. I’ve seen the gamut. But standing in the middle of the Boston Red Sox outfield in front of a gigantic stage surrounded by thousands of fans kind of took my breath away. From the front of the stage looking out on Fenway Park I could see a ton of celebrities mixed in with these anxious fans, all waiting for Pearl Jam. Chris Mintz-Plasse, better known as “McLovin” from the movie Superbad, hung with his bodyguard right on the rail. Seattle sportsman extraordinaire Kenny Mayne graciously nodded, smiled, and waved to fans yelling his name.
Finally, after almost an hour of waiting, the fog machines blasted the stage with smoke, and Pearl Jam arrived to a thunderous welcome for their first of two nights in Boston as “Aye Davanita” played.
As the band opened with “Sometimes” the stage was dark, with brilliant blue highlighting all. Spotlights beat down on Eddie Vedder as he moved into “Release.” Guitarist Mike McCready was in the zone, feeling every note, and you could tell. Fenway is smaller than Safeco but had phenomenal acoustics. You could feel the music, energy, and love of Pearl Jam moving through you. You could hear every single person singing every single word, humming every note, and sometimes beating the chairs and air with imaginary drumsticks. You couldn’t help but feel every single moment of what Pearl Jam was sharing with their fans. And without pausing, “Low Light” rolled right on.
Eddie Vedder greeted the crowd with “BOSTON! How the HELL are ya? It’s been so fucking hot in the south, in Seattle, and here on the east coast! Everywhere we’ve been has been so fucking hot!” He recounted a conversation with his ten year old daughter about how hot is “fucking hot.” It just went to show that the guys of Pearl Jam are real. They’re human. They’re so darn lovable. And they truly make live music great!
Two hours and forty minutes (and 30 songs) later, Vedder thanked the Boston crowd for supporting their “Away Shows” as part of their summer “Home and Away tour.” Proceeds from the “Home shows” had exceeded $11.5 million. Their shows in Missoula, Chicago, and Boston brought more donations for helping fight homelessness in and around the Seattle area.
Knowing how real and how human the Pearl Jam family is, you’ll know that supporting worthy causes is what makes them even more humane. If you would like to donate to help fight homelessness, go here.
Many thanks to Mike McCready, Matt Cameron, Stone Gossard, Jeff Ament, Boom Gaspar, and Eddie Vedder for continuing to rock our worlds!
Set List:
Sometimes
Release
Low Light
Small Town
Why Go
Corduroy
Mind Your Manners
Down
Given to Fly
Army Reserve
Even Flow
Amongst the Waves
Daughter with It’s OK
Got Some
Evolution
I’m a Patriot (Little Steven & The Disciples of Soul cover)
Lukin
Porch
Encore #1
*Eddie Vedder solo*
I Won’t Back Down (Tom Petty cover)
Just Breathe
*Whole band*
Present Tense
Once
State of Love and Trust
Tremor Christ
Black (with “Time Heals” and Waiting on a Friend” from Rolling Stones)
Taillights Fade (Buffalo Tom cover with special guest Bill Janovitz)
Blood
Encore #2
Out of My Mind
Alive
Rockin’ in the Free World (Neil Young cover)
**Sidenote** Rumors are that night two in Boston included “Imagine” from John Lennon, “Crazy Mary” from Victoria Williams, and a tease of “Dirty Frank” with Bill Janovitz and Danny Clinch.

Arlene Brown is both a writer and photographer for SMI. She likes to take things one picture at a time. Covering and reviewing shows from Soundgarden, The Proclaimers, Lorde, The Head & The Heart, to Hank3, Bob Log III, New Politics, Black Joe Lewis, Grouplove, including local and national rising bands and more, she truly loves to try to get that perfect shot. Looking for that raw emotion, energy, power that only live music can deliver, she captures the essence of a show in her own unique style.
Related ItemsArlene BrownFeatureFenway ParkPearl Jam
← Previous Story Black Happy reunites in stellar form
Next Story → Bumbershoot Day One