By Alex Crick on October 2, 2018@crickontour 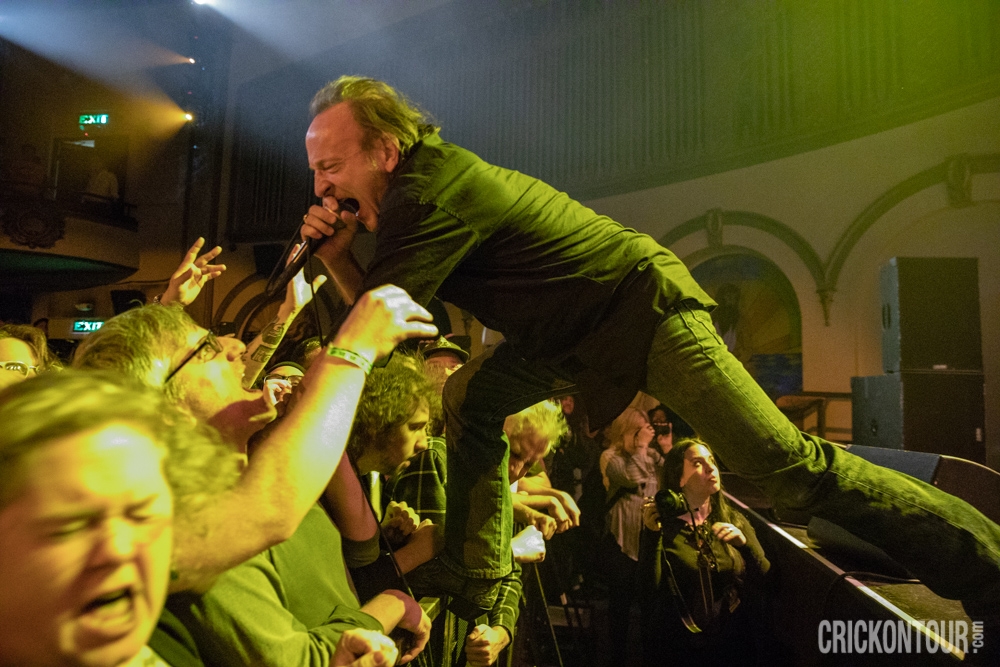 The Jesus Lizard at The Neptune Theater (Photo by Alex Crick)

The show started casually enough with the band walking on stage at The Neptune. Lead singer David Yao carried four cans of Modelo beer in each hand (which he casually placed at the base of the drum kit). No sooner had the band broken into 1992’s “Puss” when Yao hoist took a flying leap into the audience. It would be the first of many he took throughout the evening.

The Jesus Lizard originally formed in late 80’s Austin, TX after David Yow and bassist David Wm. Sims previous band Scratch Acid broke up. The Jesus Lizard formed with the addition of guitarist Duane Denison and a drum machine. They release a total of six albums, none really finding huge commercial success. The band’s final album, Blue, was released an album in 1998 and The Jesus Lizard broke up shortly thereafter. This patchy history, including a brief reunion in 2008, certainly did not stop this night’s show from selling out.

Throughout the night Yao and the rest of the band proved that they had not slowed down a bit since their radical 1990’s heydays. The band was tight, fusing off each other and completely unfazed as Yao dove, climbed into, and surfed across their die hard audience. For the majority of the show The Jesus Lizard leaned heavily on their early albums Liar (1992), Goat (1991) and Head (1990), playing songs like “Nub,” “7 vs 8,” “Boilermaker,” “If You Had Lips” and “Seasick.” Meanwhile Yao would swagger across the stage engaging in crazy antics such as hula dancing, pushups, and angling forwards on one leg to the point where he looked like he’d tip over (he never did). At one point during the show Yao placed the microphone next to his crotch area and began to stroke it smoothly and slowly before engaging in a full on rapid masturbation simulation on it. This looked especially amusing given Yao’s unbuttoned shirt which was completely drenched in sweat by this point.

The band took a short break before coming back for an encore. Yao introduced his bandmates, thanking guitarist Duane Denison, saying that he “owes him everything” and stating that bassist David Wm. Sims was “pretty awesome too.” When it came to long time drummer Mac McNeilly, Yao jokingly stated “I don’t remember the drummer’s name but he’s really fucking good” before launching into “Destroy Before Reading” from the band’s Down (1994) album. Over the course of the night Yao and the rest of the band proved that they are the Springsteen of alternative music, going for a total of three encores (during the second encore the final Modelo was chugged and crushed by Yao). There was no stopping their explosive energy. The band’s grand finale found Yao atop the crowd screaming various forms of “the reason for that is because you’re SHIT” over and over.

The Jesus Lizard proved once again that they are a force of nature that cannot be stopped. I certainly look forward to their next reunion tour which I’m sure will be even more badass than this one!

Alex Crick is a Seattle based freelance photographer specializing in music photography. His interest in photography began as a school project in the early-90′s, when he also attended many live music shows. Eventually, he combined these two interests by conveying the power and excitement of live music through the eye of the camera. Over the years, he’s traveled all over the country photographing live musical acts. You can find samples of his work in SPIN, Billboard, Esquire. View his work here
Related ItemsAlex CrickFeatureNeptune TheaterThe Jesus Lizard
← Previous Story Dropkick Murphys and Flogging Molly are ready to rock WaMu
Next Story → CHVRCHES Lead A Post-Goth Pop Charge