Don’t You (Forget About Simple Minds) 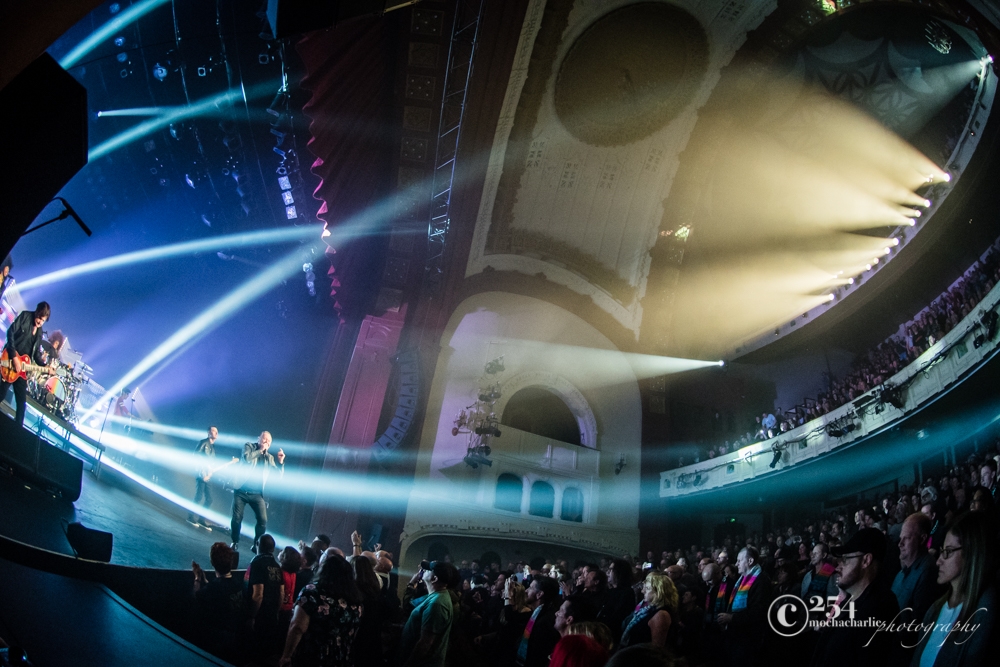 Simple Minds at The Moore (Photo by Mocha Charlie)

Although Simple Minds have played a few shows here and there since their popularity spiked in the 80’s, they haven’t toured extensively throughout the US and Canada since 1984. Yes, mathematicians, it’s been 34 years. Incredibly, it’s also been 34 years since they’ve played a show in Seattle. That dry spell ended on Sunday October 28th at The Moore Theater, ironically, the same venue they played back then.

Simple Minds has gone through numerous labels, band members, and had hits and misses throughout the years. They’ve had their fair share of chart topping albums and singles, here and in the UK, and have released a total of nineteen albums since they formed back in 1977. With their most recent release, Walk Between Worlds (Feb ’18), they announced their biggest tour in decades celebrating 40 years of music. For thousands of fans across North America, it was time to show the band they had not been forgotten. It was time for a highly supportive fan base to show how much they had remembered.

As the band walked onto The Moore stage, fans in the 1800 seat capacity venue greeted them with a standing ovation, and rarely sat in their seats all evening. There was no opener for the show, because it was Simple Minds’ time to (finally) shine. Playing a broad selection of their songs in two sets, the band left the stage for a brief 15 minute intermission only to return to yet another standing ovation. Lead singer Jim Kerr was all smiles all evening, and could be seen with his mic to his hip (during musical solos) mouthing, “Are you having fun? Me too!” to those in the front rows on more than one occasion. Each time he asked the crowd to clap along at certain parts of songs, he mouthed, “Thank you” with that same distinct smile. You could tell he was having fun. You could tell the entire band was enjoying every moment, and the crowd was engaged and exuberant, singing along and cheering  throughout the 2+ hour performance.  Their (perhaps) most famous song, (thanks to media, especially tv stations who play The Breakfast Club so often it’s on at least one station dozens of times each year), “Don’t You (Forget About Me)” was an extended version thanks to audience participation of the “la, la la la la, la la la la, la la la la la la la la la, la” portion of the chorus. The crowd kept it going for more than 5 minutes beyond the actual track time, and no one minded at all.  The evening, one that will be hard to forget, was simply fantastic.

Mocha Charlie is an amazing photographer who has a real passion for music. She covers and shoots several shows per month in and around the region. She a brilliant photo journalist but most importantly, she is also a mother who does her best to balance out her life and live it to the fullest. Mocha Charlie uses her passion and talent to support the community, her friends and family any way that she can.
Related Items80's bandFeatureMocha CharlieMusicSimple MindsSTG PresentsThe MooreThe Moore Theater
← Previous Story Christine and the Queens hitting SoDo
Next Story → Christine and The Queens