Home / Artist Spotlight / The Living Wisdom of Tobias the Owl

The Living Wisdom of Tobias the Owl 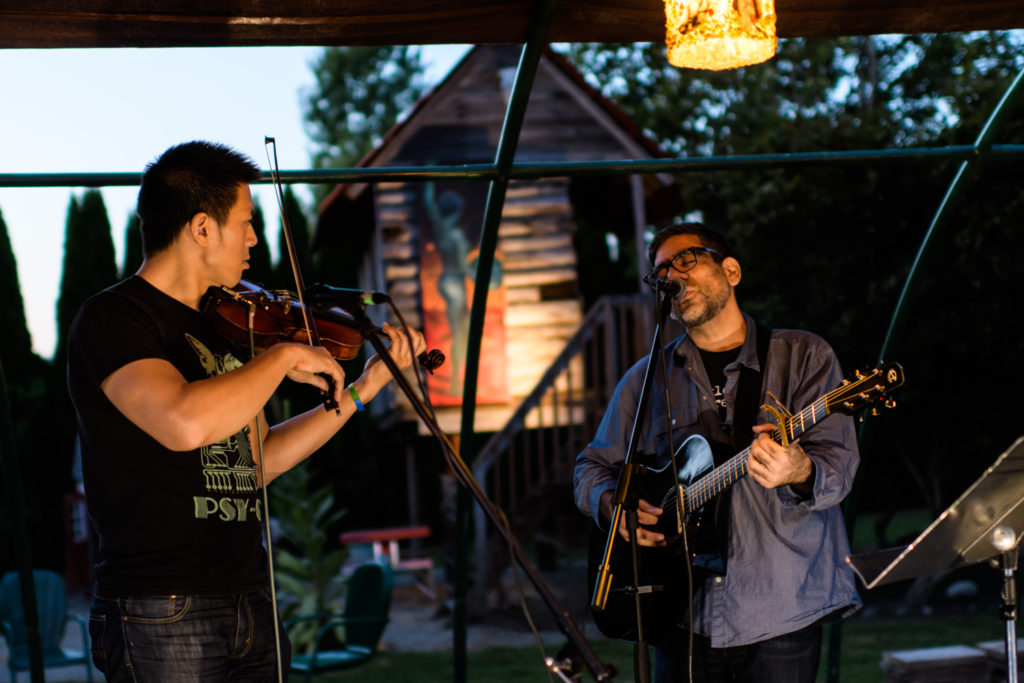 Tobias the Owl at Ashley Berg’s Memorial this past August (Photo: Jason Tang)

The album was released at the end of the summer. With haunting lyrics, whistful melodies and soulful delivery, “A Safe Harbor for Wayward Echos” is the perfect segue into fall and winter. Since the release, Tobias the Owl has been out playing several shows in and outside of Seattle to promote the album. The collection of thoughtful crafted songs is a powerful musical document written by a man who was faced with almost certain death. The authenticity and context in which the songs were composed and are all on full display on this most recent effort.

“When someone tells you you’re going to die, as happened to me, it doesn’t take long to come to terms with that, In some ways it’s easier to accept death than to pursue an actualized life. Now I struggle with the question, ‘Am I accomplishing everything I am supposed to?”

Because of his own struggle, Elijah is passionate about contributing to others who suffer or have loved ones who have been lost. Elijah is contributing a song written specifically for a forthcoming documentary #WeRideWhy. The film features Ashley Berg, who lost her battle to cancer on May 14, the day after mothers day. Ashley was a huge music fan and supporter of local artists like Tobias The Owl. Elijah also performed at Ashley’s memorial, which took place this past August, about a couple of weeks before the release of the new disc.

We recently caught up with Elijah in-between shows and he shares his thoughts on his newest release, “A Safe Harbor for Wayward Echos.”

SMI: So tell us a little about some of the various artists you worked with on this record

Elijah: I guess my ethos towards making the album was inspired by hip hop, where other artists are featured in a lot of the songs. I very much wanted to have a community-building experience and engage a lot of other musicians that I admire to finish the album. So we sent the album out to a lot of folks, and we were really overwhelmed that almost everyone we contacted made time in their busy schedules to make contributions. Ben Harper picked out his favorite song on the album and put a really wonderful guitar and vocal part on it. Laura Veirs sang on her favorite song. Inara George sang on a couple of songs. We also had Gabriel Wolfchild, Jonah Tolchin, Faint Peter, RL Heyer, and a lot of other local and internationally known artists as guest performers. I took it as a huge compliment that so many great folks wanted to add their voices and talents to the songs.

SMI: How did Andrew Joslyn get involved?

Elijah: Andrew was definitely one of my top choices of folks to work with. Not only is he massively talented and a wonderful collaborator, but he’s also one of the nicest guys in the music scene. Even though he’s worked with some of the biggest names in music, he still was really excited to work with us, and he’s been really super about sharing the album. He’s also a one-man string orchestra, so there were a lot of songs that he had a ton of input on.

SMI: How did you determine who would be joining you on the project?

Elijah: The album is about a really personal journey, but it’s also about the paradox of how our feelings of loneliness and isolation are actually very much shared and universal. We really wanted to create a compilation of songs that would be pensive, but also breathtaking and resonant to share the insights of my journey.  It was an ambitious goal, so we had to get the right folks who would understand and help us convey our story. We also wanted folks that we knew were really positive influences on the musical community. Sheldon Gomberg, who produced the album was really instrumental in that process. As a producer and musician, he’s won several Grammies, so he’s really connected in the musical community, and he helped a lot to expand and organize a really long list of collaborators. And as we added on different voices to the album, he kept the vision very cohesive.

SMI: What are some of your biggest inspirations for the songs on the record

Elijah: Although we wanted to engage a lot of artists to complete the project, I had a very personal story that I wanted to tell, so there weren’t a lot of specific musical inspirations that we were pursuing. I think it was more that there were a lot of emotional notes that we wanted to hit in very specific ways. The album is really about how I rejoined the world after being diagnosed with leukemia, and that was a very challenging experience. Parts of that journey involved facing my own mortality, learning a lot about myself, and then reconnecting with the community around me and the world at large. A lot of my feelings revolved around being lost, and a bit estranged from being so isolated, particularly during my illness. But now that the album is out and resonating with others, I have a deeper appreciation that we touched on some commonalities of human experience. I think I’m glad that the “wayward echoes” in the album have found a “safe harbor” in the thoughts and feelings of others.

SMI: How long has this project been in the works?

Elijah: I probably spent about two years or more writing, rewriting, revising and recording all of the songs. We wrote about 170 songs for the album, so it was really an intensive writing and then an intensive recording process. So it actually felt like a very rigorous and transformative 2 years.

SMI: How does your own experience with cancer influence your songwriting particularly on this record?

Elijah: Coming back from a really jarring and personally traumatic period like that was really intense, and it profoundly changed me on so many levels. I realized as I was going through treatment, that life is very fragile, and the beauty that we share with each other is very precious. So when I rejoined society and put the pieces of my life back together, I had an very changed perspective. The journey very much changed me as an artist and also as a person.

SMI: How did you get involved with writing and performing for the forthcoming documentary, #WeRideWhy?

Elijah: As a cancer survivor, I have a strong connection to the cause for the film. But the documentary is even broader in its scope. It’s really about love and loss and the courage that it takes to struggle against a seemingly insurmountable cause. I think I was moved from the statement in the trailer, that “there is no finish line” in the fight against cancer. It speaks to the courage in undertaking a journey, even when you don’t know where it might take you. There have been a lot of documentaries about cancer, but from what I’ve seen, We Ride Why really humanizes the struggle. And the movie I think will show that it’s not just about fighting a biological enemy, it’s about taking sadness and loss and using it to fuel our courage. Why do we ride? Because we believe in the struggle and the journey, even though we may never see the finish line. That degree of deep belief requires love, and that’s a really profound, universal truth of the human experience.

SMI: What is next for Tobias The Owl?

Elijah: The album is still really new, and we’re really enjoying seeing how it resonates with a lot of old and new fans around the world. We’ve got a really cool northeastern tour ahead of us with some dates in Toronto and New York City, and we’re planning some international tour dates, so we’re really looking forward to translating the songs into moving live show experiences for folks who are right now getting to know the music.

Not only is he a multi-media journalist, he is also an accomplished musician. He is the founder of SMI and drives the creative look, feel and branding for the publication. His years of writing, arranging, and performing live music in a variety of genres inform his ability to communicate the message and the mechanics of music. Roth’s work on SMI reflects his philosophy that music is the universal language, and builds community. He believes it has the power to unite people of every race, religion, gender, and persuasion.
Related ItemsAndrew JoslynBen HarperFeatureGreg RothInara GeorgeLaura VeirsSheldon GombergTobias The Owl
← Previous Story Local Music Weekend With Levi Fuller and Society of the Silver Cross
Next Story → Capitol Hill Block Party 2019 Lineup Announcement