Reignwolf Roars Back To The Showbox at the Market 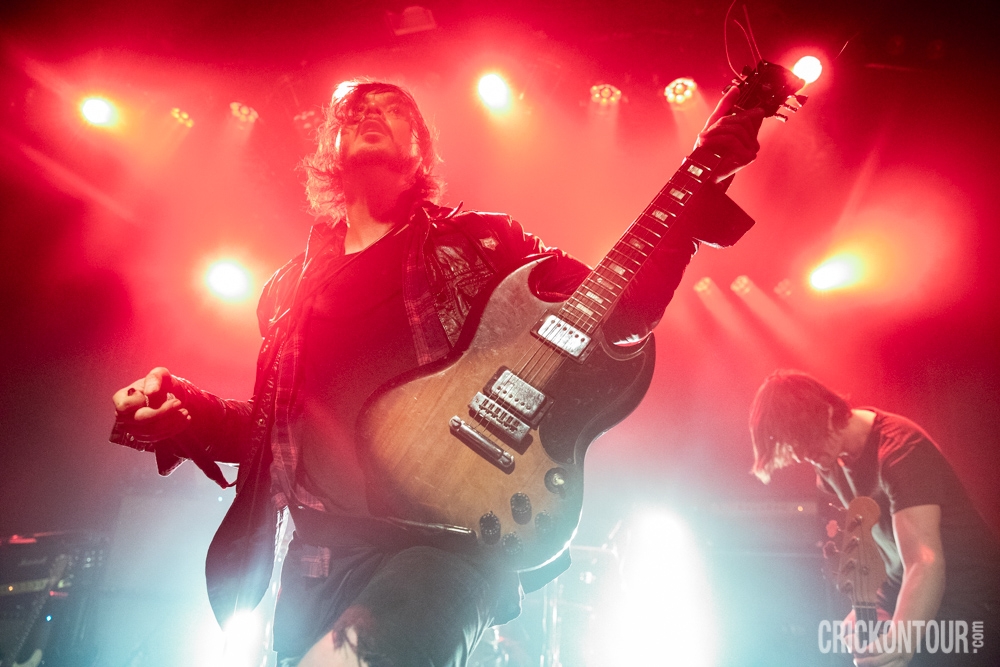 After what seemed like an eternity, Jordan Cook – a.k.a. Reignwolf – brought his ferocious blues rock back to the Showbox at the Market this month, with locals Spirit Award opening the show.

Coming off the release of their second album Muted Crowd, a dark and twisty psych rock album that is far from a sophomore slump, Spirit Award played musical chairs behind the instruments throughout their entire set. Singer Daniel Lyon sat behind the drums a bit, at the keys a bit, but mostly rocked the guitar through the songs. It was a well-deserved chance for them to play the Showbox, and they didn’t waste that platform in the slightest.

With a familiar face in drummer Joseph Braley, and a new bass player S.J. Kardash, Reignwolf delivered what he always has – kick ass rock and roll and is hard to come by these days. The band walked out to Christmas music – which was early even for me who worked in retail for years – but it was a fun change of pace from what was to come.

While it may have been almost 4 years since Reignwolf played in Seattle, it was like he never took a break at all. All the same energy and swagger we’ve come to expect from Cook was still there. Seems like it always has been, if you’ve seen the Saskatoon news story that Cook shared on the Reignwolf Facebook page this week. This dude has been jamming and making guitar faces since he was 6, rocking a legit mullet.

The crowd got to enjoy an extra long set of old favorites and new songs, though we wouldn’t be able to tell how “new” they were because we still have no album. There were even two encores! On a Monday! But everyone was loving it, especially when the entire band jumped into the middle of the crowd to play the last few songs or so entirely surrounded by fans.

Needless to say, please don’t disappear for another couple years, Reignwolf. We like you too much.

Abby Williamson is a photographer, writer, and video blogger with a passion for live music – especially the local scene. She recently moved to Seattle after commuting from Gig Harbor for shows an average of once a week for five years, so she’s happy to not have to drive as much and photograph even more concerts! When she’s not elbowing her way up to the front row at a show or sorting through thousands of photos of those shows, Abby also does freelance wedding photography, all the while cultivating a decent-sized following on YouTube. Abby has contributed to several music blogs over the last five years (and she’s really excited to join the SMI team!), and has been published in at least one album booklet for the band, Someone Still Loves You Boris Yeltsin. She would like people to know that while music photography and writing is a huge passion in her life – she is a fan first, photographer second.
Related ItemsAbby WilliamsonAlex CrickConcertFeatureJordan Cookjoseph braleyLivePhotosReignWolfReviewShowboxShowbox at the MarketSpirit Award
← Previous Story Tellers shake Sunset for Shook release show
Next Story → Lily Allen Has No Fear Of Crossing Party Lines