Lily Allen Has No Fear Of Crossing Party Lines 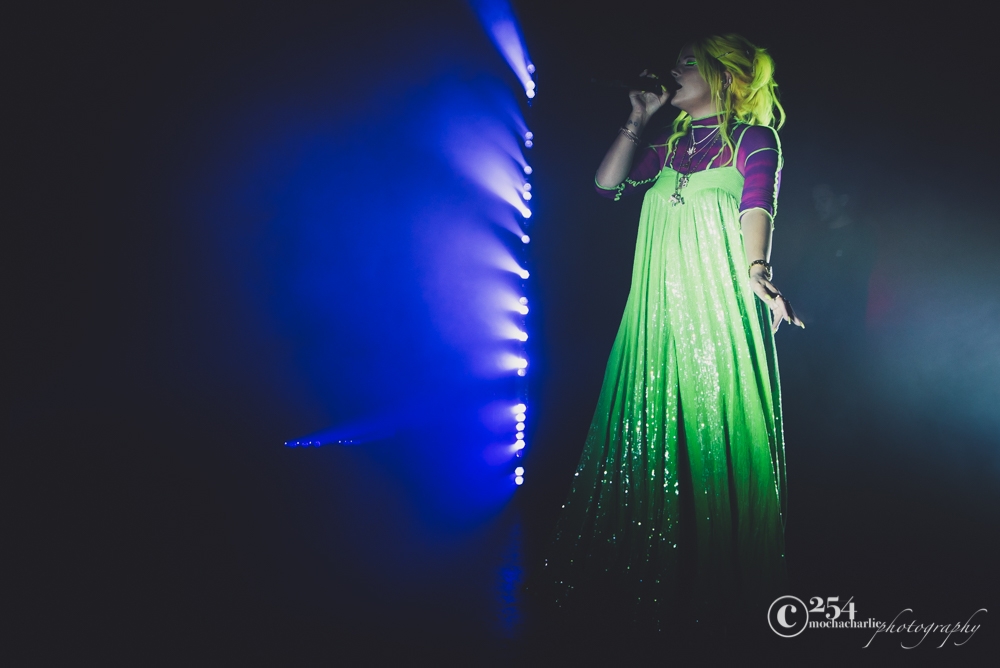 I had always wanted to see Lily Allen perform live, and this month when she played to a sold out crowd at The Showbox Market, I finally had my chance. She’s not only bold, brave, and stunning, she’s one heck of a performer. Her life has had many private ups and downs, as told in her memoir, My Thoughts Exactly, and after pain and heartbreak, time away from music and her career, she still has no fear of letting people know what she thinks. Her memoir and music both help to tell those stories.

Arriving in Seattle she found herself under the weather (bad throat), but she never missed a note. She had tea and throat spray to get her through, along with the fans who kept her spirits lifted with the singing, waving, and dancing throughout the night. It had been nearly four years since she’d played here, and since there was no opener, the night was all hers. The show went off a bit late, as many fans were still going through the security queue to get through the doors when she was planned to go on. Once she appeared though the smoke and lights, it was non stop fun. The lighting and smoke emulated a unique fantasy feel, with different hues changing the colors of her garments and skin. It was “eye candy” to go along with her performance, and fans were allowed to escape into her world. Although her tour’s timing coincided with her latest album release, No Shame, she mixed in quite an elaborate set list including fan favorites. Smile, (the first song she wrote in studio), was among them, and fans cheered when they heard the first few notes begin to play. That song remains her highest charting song in the US. Her first album, Alright, Still, went triple platinum in under a year after its release in 2006.

Having produced only four studio albums in twelve years, with numerous hiatuses in between, her music never fell short of popularity among fans. Her other two highest charting singles, The Fear & F*ck You, came off her sophomore album, It’s Not Me, It’s You. Those too were included in the night’s show. The Fear, written during what she called the “MySpace Era,” is based on her views as to where the social media explosion was headed and the prediction of how people would feed off of it’s addiction and glorification. Nearly a decade later, the song’s popularity has yet to dwindle, as do the lyrics that she put into a song as they continue to mimic what the internet’s future has become, a crazy place society is still caught up in and addicted to.

Her latest (yet to be released song), Party Lines, may or may not infer to what is happening here in the US, (she wouldn’t confirm or deny), is a very catchy tune, and fans were digging it’s vibe. The building’s full capacity remained at the end of her set in anticipation of her encore, because they just knew that her song, F*ck You, was coming and it was the one most cheered to and sang along with. Her tour continues in both Europe and Australia through the end of the year.

Mocha Charlie is an amazing photographer who has a real passion for music. She covers and shoots several shows per month in and around the region. She a brilliant photo journalist but most importantly, she is also a mother who does her best to balance out her life and live it to the fullest. Mocha Charlie uses her passion and talent to support the community, her friends and family any way that she can.
Related ItemsDowntown SeattleFeatureLily AllenMocha CharlieMusic venueNo ShameReviewSeattle music venuesShowboxShowbox MarketShowbox Presents
← Previous Story Reignwolf Roars Back To The Showbox at the Market
Next Story → Monsterwatch + Bad Optics play Band In Seattle