By Christine Mitchell on November 29, 2018@Housetornado37 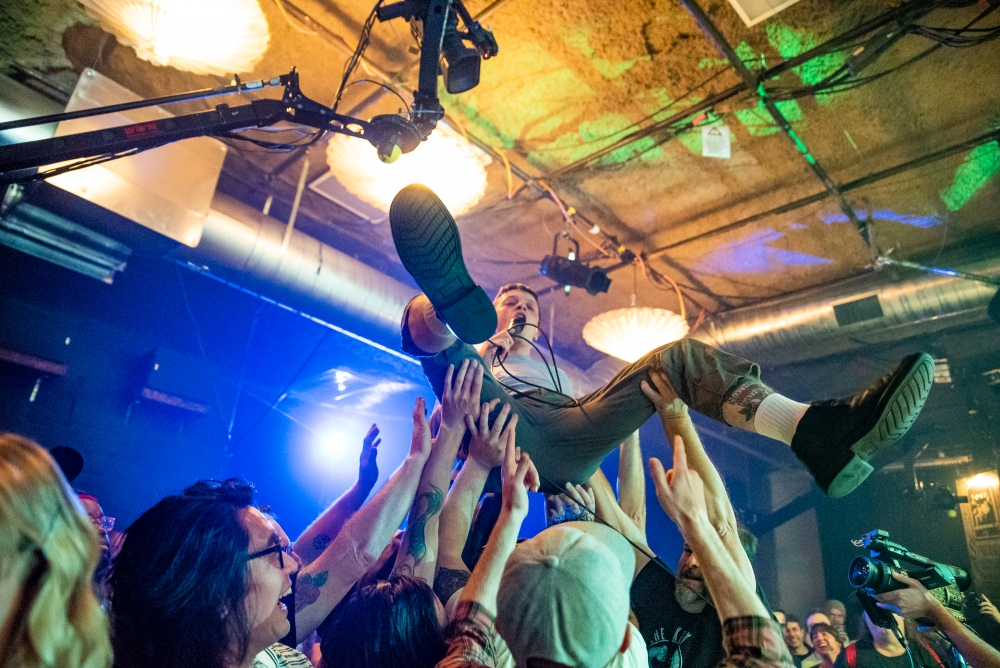 Monsterwatch at Band In Seattle (Photo by Christine Mitchell)

Band In Seattle had its final live taping for season five last month, and the pairing of Monsterwatch with Bad Optics made for one of the most explosive nights of the show’s existence. We can’t wait until these episodes hit your telly.

Bad Optics has only been around since this past April, yet they’ve been steadily playing shows and gaining a strong following. Band In Seattle has always been a passionate advocate for new bands, and Bad Optics proved up to the task of TV. Their set was powerful, with a laser focus on the execution of the music. Stage banter was limited, and glares were prolific, but the audience could almost touch the authenticity that was radiating from the band.  Those present fell under the hypnotic, crushing spell that is “Viceroy” and were incited to mosh during the hurtling pace and throbbing drums of “Personality Proxy.” Each of the four persons on stage emanated purpose. Ryan Alexander prowled about with his guitar, sidling up to his mic like a lover. Christian Smith waxed apoplectic, words vectoring out of his mouth as his fingers arrowed into his fretboard. Henry Yarsinske wordlessly searched out across the room before hunching over his bass, hair bouncing in time to his movements. Joshua Ihler, for his part, would flash smiles out intermittently from beneath hair that’s been growing out for months, exchanging the grins for grimaces as he lorded over his drumkit, playing in that push/pull way that is expressly his own.

It must be said that if you are in any way, shape, or form interested in political post-punk, Bad Optics is a band you should find out about. Check out their EP Warm Strokes of Pragmatism on Bandcamp as well as all other streaming platforms.

Monsterwatch’s music is hard-hitting in its own way, namely by means of swagger mixed with the crunch of distortion and John Spinney’s lyrics funneled through electronic acid (check out their latest, ZOT, for a hearty example). Their set ignited a rowdiness in the crowd that was reciprocated by the band members. This is pretty rote for a Monsterwatch show, sure to make great TV, and it’ll certainly surprise the uninitiated. Jack Gamero took his bass on a couple of tours through the crowd, while John Spinney did his level best to personally, physically interact with all levels of the moshing mass. From riding atop supportive hands while screaming into the mic and staring directly into television cameras to writhing around amongst folks’ feet doing guitary things, Spinney kept the room entertained and the television crew very busy. The band knows how to put on a show, and those present ate it up, adding to what will surely go down as one of Band in Seattle’s most energetic episodes to date. Keep a watch to find out when both episodes hit KING 5 and their offshoot, KONG.

Christine Mitchell has been poring over album liner notes pretty much since she acquired the skill of reading, and figured out the basic structure of rock songs at an early age. Whether it’s the needle popping into the first groove of the record, the beeps that signal the beginning (or end) of a cassette tape, or digital numbers ticking off the seconds from zero, music brings Christine happiness, ponderous thought, opportunities for almost scientific study, and sometimes a few tears. When she started attending live shows two decades ago, a whole new piece of the puzzle clicked in and she has been hooked ever since.
Related Itemsbad opticsBand In SeattleChristine MitchellFeatureMonsterwatchNail HousesNODRAVictory Studios
← Previous Story Lily Allen Has No Fear Of Crossing Party Lines
Next Story → Tuff Gong International to release Stedman’s hit ‘Free Your Mind’