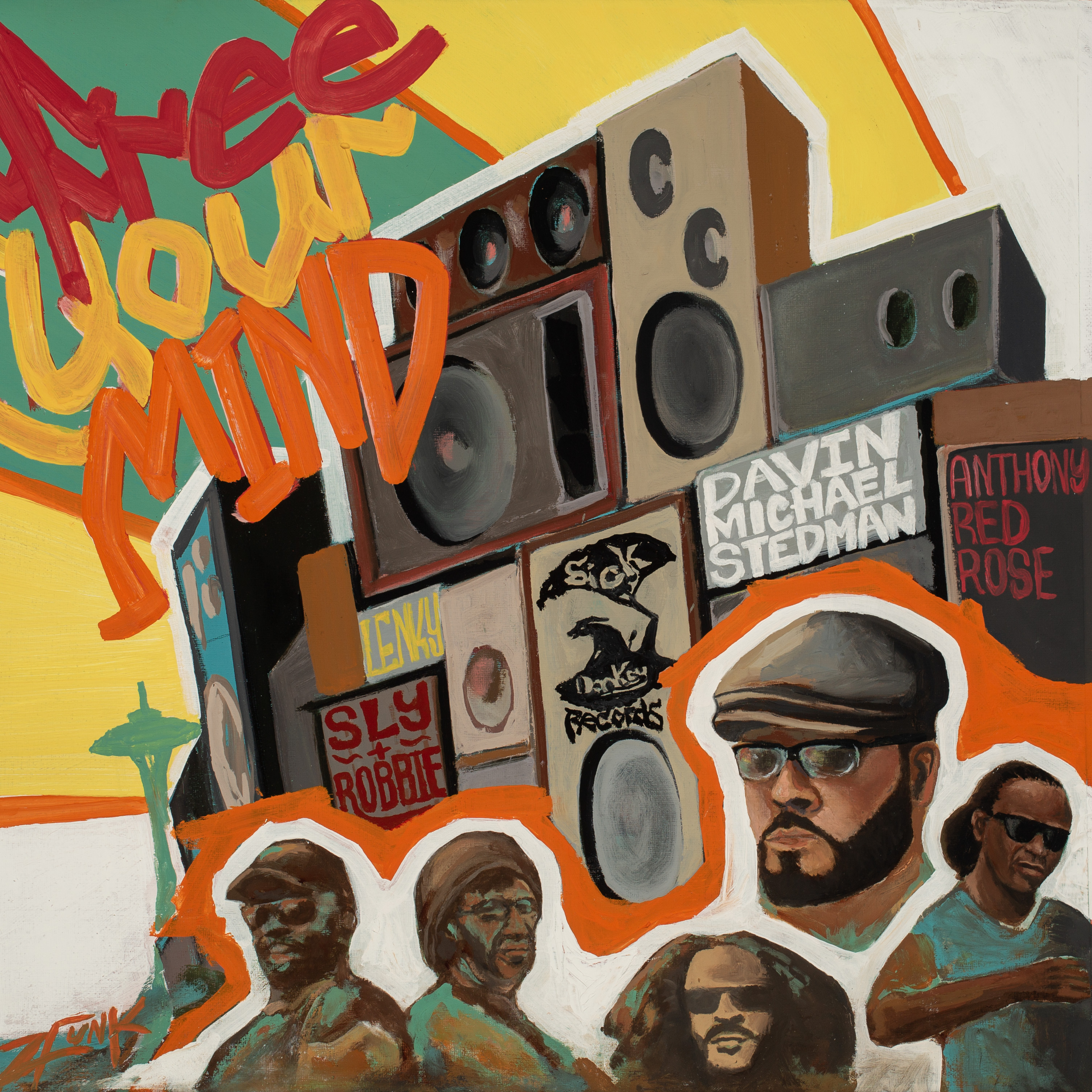 “Free Your Mind” on Tuff Gong (Art by Zac Fawcett)

The story of Tuff Gong began in 1970, when Bob Marley & The Wailers founded their own record label in Kingston, Jamaica. “Tuff Gong” was Bob Marley’s nickname, which took inspiration from Leonard “The Gong” Howell, founder of the Rastafari movement. Some names you may recognize in the Tuff Gong catalogue over the years: Peter Tosh, Steel Pulse and, oh yeah, the Marleys.

And its most recent discovery? Tuff Gong just signed a contract with Seattle’s own Davin Michael Stedman to distribute his Jamaican hit ‘Free Your Mind’ to a global reggae audience.

Since penning the infectious dancehall song in Brighton, England, and miraculously joining forces with Kingston legends Anthony Red Rose, Sly & Robbie and Lenky Marsden, Stedman’s stock has been steadily rising by the month.

It’s an important sign that Jamaica’s most influential radio DJs and stations are getting behind this track and its positive message. It also doesn’t hurt that collaborator Lenky Marden reached the upper echelons of pop charts all over the world yet again this year for his part in composing Justin Bieber’s smash hit ‘Let me Love You’.

“It’s really fabulous that Tuff Gong will be distributing the ‘Free Your Mind’ song,” said Red Rose, who produced and features on the track, “because of the lyrical content and the connection with Bob Marley’s cultural movement … it has the potential to be an inspiration to others in this mad world.”

“Free Your Mind” is being released on Bob Marley’s label. Read that statement again if you need to.

Furthermore, in the hours leading up to the publishing of this story a source at Tuff Gong reported that the label is aiming to re-release the song on all digital formats by January 28th, in advance of the annual Bob Marley Birthday concert at his former home at 56 Hope Road. This is the current site of the Bob Marley Museum which some consider to be the center of the world of Reggae music.

It was the initial buzz behind the song and then the accompanying video, first released by (the still closely involved) local label Sick Donkey Records, that inspired some of Davin’s newest fans in the Jamaican music industry to intercede. Certain, let’s just call them angels, saw to it that ‘Free Your Mind’ ended up in the able hands of the flagship imprint of Jamrock itself. In addition, Stedman, himself a half Puerto Rican with deep West Indian roots, has more than a few Caribbean heavy-hitters interested in future collaborations.

Davin recording ‘Free Your Mind’ with Robbie Shakespeare at One Pop Studios in Kingston. (Photo by Bluejay Hankins) 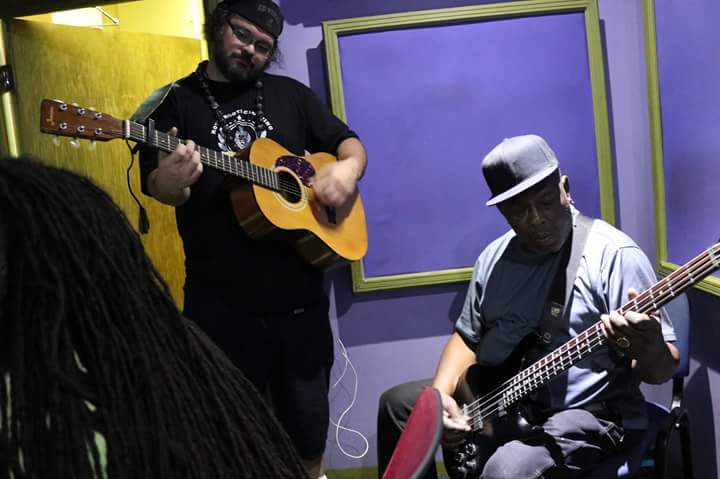 You may know Stedman from his shape-shifting band The Staxx Brothers, Seattle soul-funk genre bending mainstays who have an impressively long list of local headlining and support spots, opening for everyone from Fishbone to Los Lobos, Sir Mix A Lot to Warren G. I’ve always been a fan of Stedman’s go for broke, let it all hang out there style.

I also have followed Staxx Brothers since we played SXSW together in 2010 — back when they traveled with a rapper in tow — and have been an enthusiastic supporter of the band for a long time. No disrespect to Staxx Brothers, however, ‘Free Your Mind’ is a big artistic step forward for Stedman and proof positive that the globalized musical landscape is fertile. The right song can ripple and resonate with world-wide audiences that cross a multitude of lines.

Leroy Scarlett, the producer and manager of Jamaica’s Reggae Powerhouse Band, who will be teaming up with Stedman on soon to be announced stage shows around the Caribbean, credits Red Rose for making the hit happen.

“Red Rose got the right song, the right singer and the right team,” Scarlett said. “When I heard ‘Free Your Mind’ I knew this song and this singer from Seattle was special. Together they created a very special song. Then again, Jamaica is a very special place. For a songwriter like Mr. Stedman that can sit down with his guitar and write a hook every day, Kingston is paradise.” 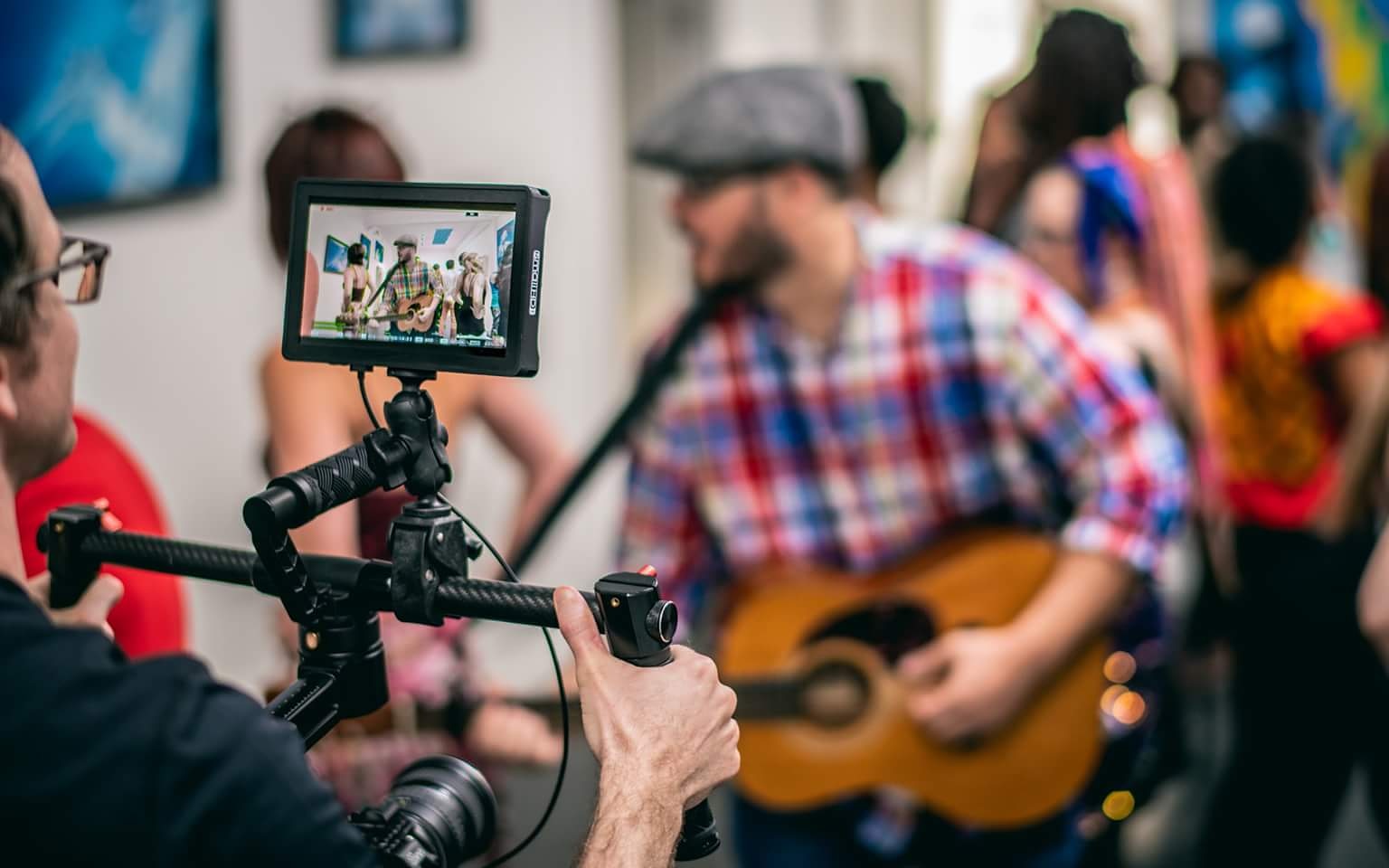 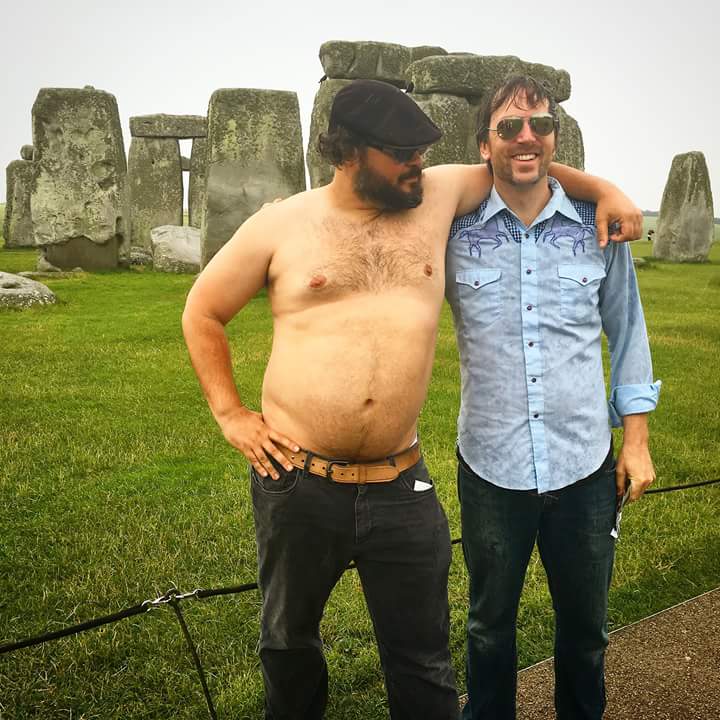 One reason I’ve been following this story closely and felt compelled to write about it is “Free Your Mind” has its origins around the 2016 UK meet up Davin and I had. You may remember the semi-viral photo of when Stedman crashed my UK tour and provided full-frontal nudity at Stonehenge. Not long after he and I connected at Stonehenge, just as I was concluding my Massy Ferguson UK tour, he started strumming each morning in the English Garden (or as we Americans call it a patio) of our pal Scott Rowe of the British band Sherlock Soul.

Each morning in the seaside town of Brighton he penned a new tune in that little 12 x 12 “garden” and posted on Facebook. One of those posts I witnessed was a particularly promising song sketch. It was ‘Free Your Mind’.

Having seen the progression of this song from its infancy on that island of England, I am more than impressed at the final product and not surprised at its warm reception. This has the potential to be a serious dancehall hit beyond the Caribbean.

“I didn’t write this as a reggae song necessarily. That morning I just felt like writing something extra catchy with a real deep groove” Stedman explains. “I wrote ‘Free Your Mind’ in Brighton around the time Ethan and I invaded Stonehenge, so that may have been the source of the song’s magical power,” Stedman laughs. “I remember thinking that morning how cool it would be for someone like Sly & Robbie to got ahold of the song and do something with it. But that was just a cool thought, like wouldn’t it be neat if I jammed with Oasis at Glastonbury?”

And indeed, somehow, the first part of that fantasy has already happened.

When Stedman’s friend, producer Bluejay Hankins, flew him to Jamaica to cut some “bangerz” for his label Sick Donkey Records, it seemed as if Jamaica intervened and brought Davin, guitar in hand, to One Pop Studios in Kingston. It seemed that way when Red Rose told his side of the story on Jamaica’s #1 morning television show, Smile Jamaica.

Bluejay and his label are still heavily involved in the project as he is in the crucial role of executive production along with Stedman and Hankins close ally on the island, singer and consigliere Lenni I, a man who made Stedman’s movements possible and, according to Stedman, provided him with “prophetic maxims, encouragement, and warnings”.

As the story goes, Lenni I pulled Stedman aside at one point at One Pop and said, “Don’t stare a gift horse in the mouth,” and proudly patted his fellow songwriter on the back — obviously because every one sensed that they had been a part of something special among Sly & Robbie’s near half a million recorded performances and Red Rose’s resume of stellar productions.  The studio motto is made plain to all who enter.

Okanogan County native Bluejay beamed during an interview as he was still processing the news.

“As a local Northwest label with strong links to Jamaica, having a track like ‘Free Your Mind’ distributed by Tuff Gong is a dream come true,” he said. “I am really looking forward to what we can accomplish with Tuff Gong on board.”

Bluejay then recalled the origins of the ‘Free Your Mind’ session, which reads like a movie script. “I remember that morning of his arrival when Davin told me he had been invited to a session in Kingston. You should have seen the look on his face when I told him he was headed to a Sly Dunbar session and that he better bring his guitar.”

Scarlett claimed such supernatural connections are commonplace at One Pop. He repeated the studio motto, and then after a long pause, “Mr. Stedman is an example of why this is so. He walked through the right door his first day in Jamaica. That meeting was meant to be.” 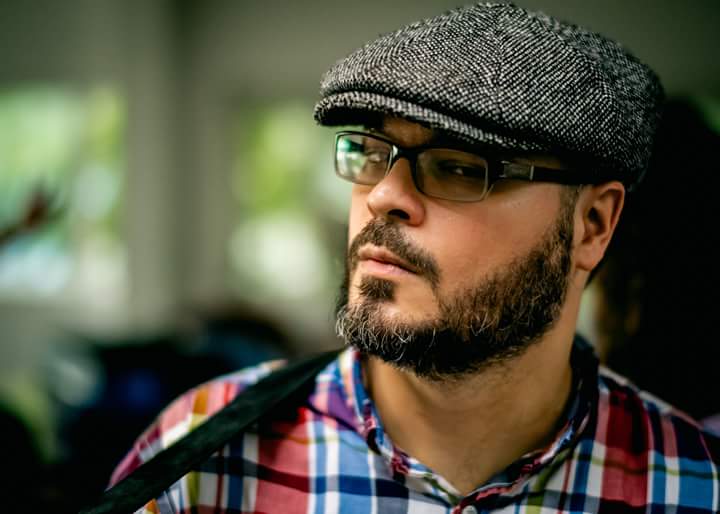 The song is coupled with a seriously impressive video shot in both Seattle and Kingston, a collaboration between acclaimed local director Garrett Gibbons and Cuban filmmaker Roy Roy Ce. The final product looks like the most fun you could have at a local art gallery during daylight in a Jamaican neighborhood. The message is positive, and the music is somehow every bit as tough as any modern classic.

The positive lyrics are juxtaposed with a dark dancehall groove, and a hybrid with what the song’s keyboardist Lenky Marsden has called the “American folk ting.” Lenky is adamant that he followed Red Rose’s unique vision from start to finish, but Red Rose harnessed Lenky’s unique brand of Caribbean EDM pop that took Sean Paul to the top of the charts riding the now legendary “Diswali riddim.”

Lenky Marsden discusses the making of ‘Free Your Mind’:

Anthony Red Rose and Sly Dunbar talk about the potential of Davin and their first collaboration at Sly & Robbie’s Headquarters, One Pop Studios:

Impressively, Stedman doesn’t appear to be out of place or “trying on” dancehall/reggae — in fact, he looks perfectly comfortable, guitar in hand, smoothly delivering the first verse and ear-worm inducing chorus to ‘Free Your Mind.’ His vocals and presence on the song seems both original and natural.

This could be the start of something big.

Once ‘Free Your Mind’ is released on Tuff Gong, expect a spike in airplay, increased visibility of the video on Tuff Gong TV, and some previously unattainable placements on Spotify playlists. At this hour we are even watching Stedman entertain the invitation of The Reggae Powerhouse Band and Tuff Gong to return to Jamaica to celebrate the birthdays of both Marley and the man Bob himself called “The Crown Prince of Reggae.”

The message of ‘Free Your Mind’ is simple, but at the same time it is powerful and profound in its execution. The phenomenon of Stedman in Jamaica may seem unexpected but it’s completely in step with his history: a half-Puerto Rican dude from Everett who simultaneously loves both Willie Nelson and Outkast and knows more about medieval European history than you could possibly imagine. Maybe this is not so surprising for a guy who has made a career bent on blurring boundaries both cultural and musical alike.