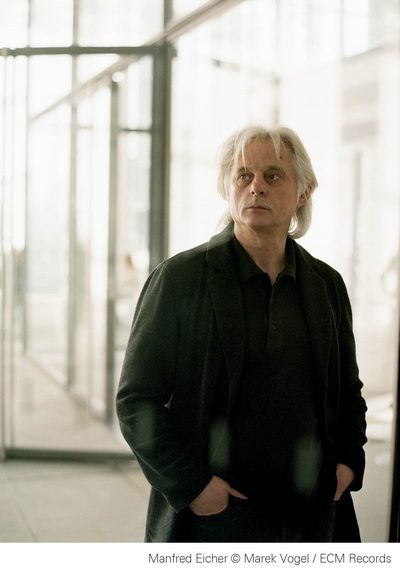 In anticipation of 2012’s Earshot Jazz Festival in Seattle, I am introducing a series of reviews based on ECM Records, whose extraordinary history continues to unfold as being among the most significant, enduring, and relevant forces in music worldwide.

I will first be focusing on ECM artists who are due to visit the area this fall, and then maintain a platform which could be seen as a revolving door for upcoming releases, reissues, books, interviews, films, and concerts.  In conjunction with the inaugural review, Marc Johnson/Eliane Elias/Joe Lovano/Joey Baron – Swept Away, what follows is a brief synopsis of the ECM story:

Since the inception of ECM Records in 1969, and after more than a thousand albums released, the recording industry has seldom seen a superior standard for presenting such a range of international talent, musicianship, production, and engineering.  The initial model was cast as a kind of transcontinental magnet for jazz artists, and quickly made history with a string of releases under a banner which included the likes of Keith Jarrett, Jan Garbarek, Chick Corea, Pat Metheny, Bobo Stenson, Terje Rydpal, and Paul Bley, to name a few.  Manfred Eicher, the label’s founder, curator, and principal producer, continues to uphold a legacy that at its root springs from good tilled earth, bearing the seeds of both classical study and tireless research in the history of improvised music.

That each album averages just two days to record and one day to mix illuminates a paradigm which in fact holds the key to Eicher’s philosophy – one that inherently promotes trust in the impulses of the artists he chooses to work with, and ensuring the final product will capture the aim of those involved without compromising a freshness in the fruit of the finest performances.  Perhaps just as curious are the album sleeves, which over time have attracted an almost mystical following, eventually leading to the publication of two books which exclusively showcase and discuss cover art – Sleeves of Desire and Windfall Light (Lars Müller Publishers, Badem, 1996 and 2010).

Over the course of its evolution, ECM (which stands for Edition of Contemporary Music) defined itself as a proverbial melting pot, drawing upon Scandinavian folk, Middle Eastern, Western classical, and of course, American jazz musicians.  This passport for experimentation cultivated unlikely pathways which intersected at various points along the label’s trajectory, ceremoniously enabling new world expressions to flow out of ancient traditions.  ECM also became a trademark for audiophiles, greatly expanding the art of recorded acoustic music, and contributing a wealth of the world’s richest and most exhilarating listening experiences.

By 2007 the label achieved iconic status, winning prizes for both classical label of the year (MIDEM Classical Awards) and jazz label of the year (Jazz Journalists Association).  In 2008 the Downbeat Critics Poll recognized Manfred Eicher as producer of the year, as well as chose ECM as jazz label of the year.  The accolade was repeated in 2009, and in the same year a documentary “Sounds and Silence” hit film festivals everywhere, providing remarkable insight into Eicher’s process as he travels over a period of five years to sessions across the globe.  One would not have to probe too deeply beyond the reward to discover what remains essential to his formula, as simply stated by the man himself – “I believe the producer’s role is to capture the music he likes, and to present it to those who don’t know it yet.”

Several ECM artists will be appearing in Seattle in the coming months, including pianisit András Schiff at Benaroya Hall, Marc Johnson / Eliane Elias Quartet at Dimitriou’s Jazz Alley, and Nik Bärtsch’s Ronin at Cornish College of the Arts (Poncho Concert Hall). Keep checking back here for more CD reviews and live previews. For a schedule of shows, visit:  http://earshot.org/Festival/glance.html and http://www.jazzalley.com/calendar.asp

Not only is he a multi-media journalist, he is also an accomplished musician. He is the founder of SMI and drives the creative look, feel and branding for the publication. His years of writing, arranging, and performing live music in a variety of genres inform his ability to communicate the message and the mechanics of music. Roth’s work on SMI reflects his philosophy that music is the universal language, and builds community. He believes it has the power to unite people of every race, religion, gender, and persuasion.
Related ItemsECM RecordsJazzJonathan SindelmanManfred EicherNew Music PreviewNewsRecord Label
← Previous Story Quick Q&A with Serj Tankian re. new tour and record
Next Story → Macklemore & Ryan Lewis steal the number 1 slot on iTunes