By Alicia Kamenick on November 30, 2012@corianderstem 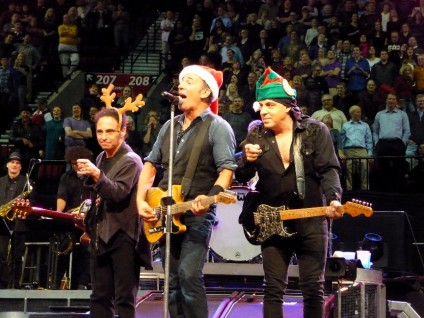 There were ghosts at Portland’s Rose Garden arena Wednesday night. Bruce Springsteen and the E Street Band filled the space with joyful noise, but even with 17 musicians on stage, there were two big holes: Danny Federici and Clarence Clemons.

This is the first E Street Band tour since both had passed away, and their absence was highlighted several times throughout the show. During My City of Ruins, spotlights shown on the empty spaces at the organ and the microphone stand at stage right.  At the end of the show, Tenth Avenue Freeze Out let the fans show their appreciation for the very dearly departed.  After the line “When the change was made uptown, and the Big Man joined the band,” images of Clemons and Federici flashed onto the screens, the music stopped, and the applause and cheers of the crowd roared throughout the arena for several minutes.

The Big Man, of course, left some very big shoes to fill. Clemons’ own nephew Jake stepped into them admirably, taking over the iconic sax solos in fine form.  The E Street Band is often a family affair, with Max Weinberg’s son filling in for his dad behind the drum kit for a while in 2009, and Springsteen’s wife Patti Scialfa as a mostly-full-time member of the band (Scialfa has not been touring with the band this year).

But aside from the melancholy of those moments, the ghosts of E Street Band past allowed the rest of the show continue in full-fledged tradition of half-party, half-revival, with The Boss testifying to the heavens, gravelly voice booming, 63-year-old body still spry and bendy. (Back bend at the mike stand still a part of the show? Check and check, and the ladies in the house say “GLORY HALLELUJAH!”)

The setlist was the traditional mix of new songs (five tracks from this year’s excellent Wrecking Ball), a grab-bag of old tracks (both crowd favorites like Thunder Road and deep cuts like Seeds), and requests, written on signs which he pulled from the audience and played throughout the show.  Highlights from the fan requests were the lovely If I Should Fall Behind, performed solo by Bruce, and Growin’ Up in honor of the requestor’s 50th birthday; the birthday boy even got the chance to join his hero on stage to help sing the song.

Fan interaction was a theme throughout the evening, from little girls pulled onstage to sing Waitin’ On a Sunny Day (they were adorably giggly and awestruck), a woman spinning a fan-made “request wheel” (it landed on “Steve’s Choice,” and Little Steven picked the rare track Loose Ends), and a group of women who had been dancing throughout the show under a banner that read “Lesbians Love Bruce!”  Springsteen even indulged in a little crowd surfing, making the trek from the platform in the middle of the floor back to the stage via the (thankfully) sturdy hands of the fans in the pit.

The last five songs were played with the house lights up, which brought the show to a close in full party atmosphere.  It’s hard to remain unmoved when you can see the entire arena dancing and singing along.  And then when Bruce borrows a fan’s Santa hat and violinist Soozie Tyrell starts shaking the sleigh bells, it’s pretty hard to stand still and not smile … unless you’re The Grinch.

It’s not surprising to learn that so much of the show is scripted and rehearsed to perfection – spontaneity rarely looks that pristine.  But when the show still comes across with so much heart, energy, and passion for every little movement, you know you are in the presence of a master entertainer.  They don’t call the guy The Boss for nothing.

For photos of the show go here.

Alicia is a Midwest transplant who loves Seattle but misses thunderstorms. Her musical obsessions began when her coolest aunt gave her a copy of K-Tel’s Rock 80 album for Christmas when she was 7. She spent many years studying piano and voice, but the force of rock and roll won, so while she still sings in a local chorale, her true musical passions lie more with The Beatles than with Beethoven. When she’s not working at her job in HR, she can be found singing bad pop songs at the top of her lungs … although sometimes she does that
Related ItemsAlicia KamenickBruce Springsteen and The E Street BandRose GardenSeattle Music Happenings
← Previous Story Legendary drummers Michael Shrieve and Neil Peart go one on one
Next Story → Seattle WAVE Radio crowns Jammin’ Challenge winner at Hard Rock (Photo Slideshow)