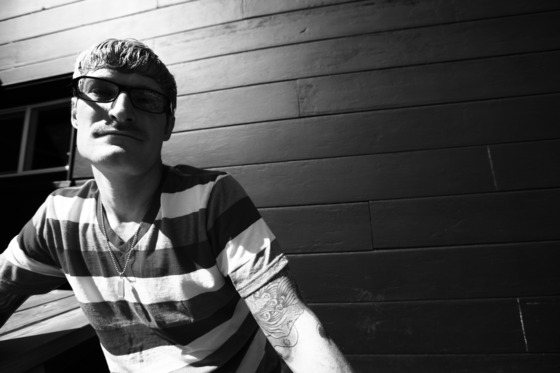 Any person who has frequented enough coffee shop open-mic nights or college parties can speak to the disenchantment one can harbor toward self-absorbed singer-songwriters equipped with nothing but their emotions, voice, guitar, and pretentious demeanor.  And if you are wondering, yes I have been that guy. But it is my experience of assuming the role of the afore mentioned archetype that made me all the more relieved by Graig Markel’s solo performance at his CD release show on Saturday, January 7th. Because every that guy trying to impress the attractive barista, angling for a make-out session at the end of the party, or misquoting a German philosopher of whose name they pronounce improperly, is striving to be what Graig is. And that is a master of his craft.

I arrived at The Recovery Room (Markel’s studio in the Green Lake/Ballard area of Northern Seattle) around 7:50 p.m. Because I had a 2 hour drive and a potentially dangerous mountain pass between me and the CD release party I left a bit earlier than necessary. Luckily I was not alone in my hasty arrival so I followed a sharply dressed couple through a gate and into Markel’s yard. I entered what appeared to be a guest house at the back of the lot to find myself in the Recovery control room. I was surrounded by 15 or so strangers decked out similar apparel as the couple I followed in. I keep mentioning the attire because I went for the “classy-casual” look and was worried I would be the jerk showing up to a jeans and t-shirt event in a sport-coat, button up and tie. Luckily, and as I had hoped, I walked the middle ground as far as fashion sense was concerned.

Aside from the slight surge of anxiety fed by the surrounding unfamiliar faces in this unusual venue, I was very much intrigued by the dimly-lit room. You would think that the X-ray photos of a spinal column and ribs and a tibia and fibula backlit by blue and green lights respectively, would have caught my eye first. Or maybe the chest full of beer on ice would be a likely initial observation when a man who loves beer such as myself enters a room. But no, as much as I love a good brew and as much as I enjoy an opportunity to practice some osteology, nothing can grab my attention and pin it to the ground like recording equipment. I found myself ignoring the people and investigating the gear. “What kind of studio monitors are those? Holy shit a Moog and a Juno! I gotta try out some of these hand-wired effects pedals!” These thoughts were interrupted just before I disappeared completely into the realm of nerdom by a melody coming from the other room.

In the room to my immediate right Markel was finishing up the last song of his sound-check. He entered the control room and said his hellos to everyone. Some were there as close friends and some, myself included, were invited because of our involvement in Graig’s Kick Starter campaign (Kickstarter is an online pledge system for funding creative projects. Prizes of varying value are offered as incentives to donate). After a brief round of pleasantries Markel invited everyone into the recording room to get the show started.

Approximately 30 people piled into the larger of the two rooms of the building and Graig strummed the first chords of The Sharpest Arrow, track 7 of his latest self-titled release. “This is how an acoustic set is supposed to be!” I thought to myself as I noticed every soul in the room forfeiting their undivided attention to Markel’s superb voice and song-writing. Even a young girl around seven or eight years old was transfixed. And when the song came to a close she clapped more vehemently than anyone else in the room and it seemed genuine, as opposed to the often over-exaggerated expressions children her age are capable of.

The set continued with Chromakey in Monotone (possibly the most up-beat song on the new album and my personal favorite). The two IPA buzz I was sporting boded well with this tune and I found I was enjoying myself immensely. Gone was the anxiety of being in an unfamiliar place, gone even was the kid in a candy shop curiosity of the gear and gadgets in the room behind me. Maybe it was the India Pale Ale talking but I couldn’t help to chuckle in amazement at the thought of a song alleviating that minor twinge urging me to retreat to familiar faces.

The song ended and Graig switched from one beautiful Gibson acoustic guitar to another and checked its tuning. Unfortunately it was a bit out so he began remedying the problem. I am not sure why but the next thing he said struck a profound chord with me. Maybe it’s that being a guitarist I often find myself feeling awkward in front of a crowd when I have to tune my guitar. The show comes to a halt. The room quiets and the crickets start chirping. Just as I began commiserating with him Graig offers up this gem: “Tuning is boring…but the end result is worth it”.  As I type this I am reminded of the importance of delivery so it does not translate itself to text so well but the tone, cadence and timing of this statement was unintentionally perfect. The crowd had a laugh and the guitar was tuned by the time the last chortle was expelled. Sorry Graig, but I am stealing that line for my next show!

Throwing in a few covers, including a very soul infused take on Neil Young’s My my, Hey Hey, and a couple of his older tunes, Markel covered a healthy portion of his newest release. Though it is more stripped down than his previous solo album, many of the songs consisting of one guitar and one vocal track, Self-titled is more soulful. Hearing the songs for the first time live in an intimate setting rather than from the CD may have made me biased, but there is a certain bitter sweetness to the emotional mass of the lyrics. The weight of which is carried, with ease, by the soft yet powerful, highly skilled vocal chords owned and trained by Markel. Vocal chords that every self-absorbed, pretentious open-mic performer thinks he controls as his voice echoes off the walls of his chest cavity, head shoved to the shoulders up his own… well, I’ll let you fill in the blank there.

After the set, Graig joined everyone again for drinks and conversation. I obtained copies of not only his solo albums but also the latest release from his band Animals at Night (which I highly recommend) and picked his brain about the effects pedals he builds and wires by hand. As I felt myself backsliding through the realm of nerdom, on a collision course with the thin barrier between it and the highly socially damaging geek realm I decided that it was time to mosey on home (besides I was my IPA was empty and another would have rendered me unfit for legal driving).

Not only was it a great performance but Graig and his very talented wife/band-mate Zera Marvel were excellent hosts. Providing refreshments and snacks for guests as well as expressing sincere gratitude for everyone’s attendance and support, they nurtured a very welcoming environment and for this I would like to thank them. It may have been one of the more unconventional shows I have been to, but it will certainly rank among the most memorable.

Not only is he a multi-media journalist, he is also an accomplished musician. He is the founder of SMI and drives the creative look, feel and branding for the publication. His years of writing, arranging, and performing live music in a variety of genres inform his ability to communicate the message and the mechanics of music. Roth’s work on SMI reflects his philosophy that music is the universal language, and builds community. He believes it has the power to unite people of every race, religion, gender, and persuasion.
Related Itemscraig markelfakelabelrecords.comgraigSeattle Music Happeningstgraceband.comtimmy held
← Previous Story SMI Radio Ep.46 On Demand: Global Heat / Bob Tomberg (MANW) and Jessica Latshaw
Next Story → SMI Radio Ep. 47 On Demand: Joe Simpson AKA ‘Eldridge Gravy’ / Theophilus London