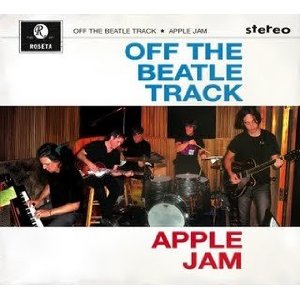 This guests on SMI Radio are  “Apple Jam” The band masterfully recreates the authentic sound of the Beatles while staying true to their own remarkable stage persona. Apple Jam has sold out shows at major venues in Seattle, and most recently headlined Beatle Week 2009 in Liverpool (300,000 attendees annually). Member musicians are: Rick Lovrovich (bass), Jon Bolton (drums), Mike Mattingly (guitar), Johnny Jones (keyboards) and Kurtis Dengler (guitar). Apple Jam was formed in 2005, in support of “(Just Like) Starting Over”, a stage play based on John Lennon’s final interview. To read more about them go here.

Not only is he a multi-media journalist, he is also an accomplished musician. He is the founder of SMI and drives the creative look, feel and branding for the publication. His years of writing, arranging, and performing live music in a variety of genres inform his ability to communicate the message and the mechanics of music. Roth’s work on SMI reflects his philosophy that music is the universal language, and builds community. He believes it has the power to unite people of every race, religion, gender, and persuasion.
Related ItemsApple JamOff the Beatle TrackThe Beatles
← Previous Story SMI Radio Podcast Interview with ‘nu disco / wave pop’ pioneers ‘Black Cherry Crush’
Next Story → Apple Jam live at Woodshed Studios in Seattle Full Coverage (video)