Taste of Tacoma delivers the goods and more… 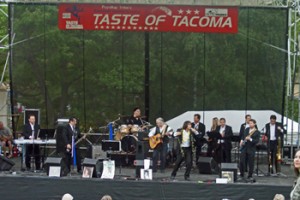 I had a lot of fun hanging out and seeing a couple of my former band mates play with “Cherry Cherry” at the Taste of Tacoma this past Friday. “Cherry Cherry” is one of the best Neil Diamond tribute bands in the region.  Also there was another band I had the chance to check out and they are called 3D. I had the opportunity to meet their talented and charismatic guitarist. Herman Brown. Herman has been doing his thing in and around the region for several years. He recently contributed his talent to the award winning film Wheedle’s Groove.

The film covers the funk an R&B scene in Seattle from 1965 to 1975. Until I had met Herman, I had not heard of the film but I am now interested in checking the film out. Moreover, I am going to be interviewing Mr. Brown for an upcoming episode of SMI Radio in August. He and his band will be doing a big show for Bumbershoot and we will be there to cover the show as well.

In the meantime, enjoy the article and photos on examiner.com from my coverage of The Taste of Tacoma right here.

Not only is he a multi-media journalist, he is also an accomplished musician. He is the founder of SMI and drives the creative look, feel and branding for the publication. His years of writing, arranging, and performing live music in a variety of genres inform his ability to communicate the message and the mechanics of music. Roth’s work on SMI reflects his philosophy that music is the universal language, and builds community. He believes it has the power to unite people of every race, religion, gender, and persuasion.
Related Items3DCherry CherryTaste of Tacoma. Examiner.com
← Previous Story Apple Jam live at Woodshed Studios in Seattle Full Coverage (video)
Next Story → SMI Featured Artist of the Month (July): Aury Moore (SMI Radio Interview)