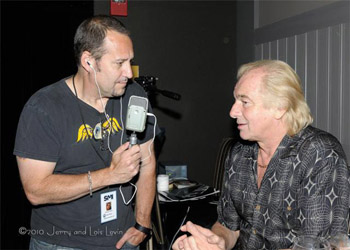 It was a busy weekend. I had the opportunity to cover a great Beatles tribute band, Apple Jam. For more information on them and the show etc, scroll down. drummer Alan White (Yes, Plastic Ono Band)  made a special suprise appearance and performed on the encore number, “Instant Karma” Alan is one of the classiest folks that I have met and does a lot of great work in the community on behalf of music education. I had the opportunity to interview him for the next episode of SMI Radio. My friends and colleagues, Jerry & Lois Levin captured the moment on celluloid in the photo above. Thank you Jerry and Lois. You can check out more of their photography here.

I had the tables turned on me on Friday, July 16th at the Comcast Bite of Seattle. Typically I am the one conducting the interviews but was given the opportunity to be interviewed by digital reporter Jack Olmstead. He is up on all of the latest and greatest Internet video technology. It was a lot of fun to be on the other side of the camera this time.  I do have to make a couple of corrections for some mistakes I made in the interview. First of all, the band that I was getting ready to interview is Perry Acker not Perry Ackerly. They are a fantastic band and I recommend that you check them out here.

Second of all, The digital cameras that I use to shoot my interviews are Flip HD Ultra cameras. I use a Zoom H2 to conduct my mobile interviews. Being a journalist, it is important that I keep my facts straight and correct any inaccuracies. Enough geek talk, I hope you enjoy the interview as much as I had fun doing it!

Not only is he a multi-media journalist, he is also an accomplished musician. He is the founder of SMI and drives the creative look, feel and branding for the publication. His years of writing, arranging, and performing live music in a variety of genres inform his ability to communicate the message and the mechanics of music. Roth’s work on SMI reflects his philosophy that music is the universal language, and builds community. He believes it has the power to unite people of every race, religion, gender, and persuasion.
Related ItemsAlan WhiteApple JamdigitalreporterGreg RothJack OlmsteadJerry & Lois PhotographyPaul McCartneySMIThe Beatles
← Previous Story The Comcast Bite of Seattle: Post event coverage
Next Story → ‘Seattle Live’ at The Hard Rock Cafe off to a great start