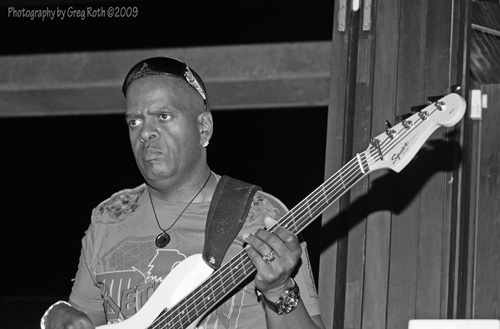 This past Wednesday afternoon, March 16th, 2011 the Pacific Northwest lost an amazing musician and friend. Lawrence Hightower passed away at the University of Washington Medical Center due to heart complications. The musician had been in an out of surgery for several days prior to his passing putting up a valiant fight but ultimately succumbed when his organs began to shut down due to further complications from the various surgeries.

Hightower was considered one of the most talented bassists in the region and beyond. (see video below). He was well known in the musical community and worked and played with some of the areas’ most prominent musical artists.

Big in stature and in heart, his talent was only eclipsed by his warm personality and spirit. Several artists throughout the region have been and will be paying tribute to Lawrence throughout the weekend. Local funk tribute band, Sonic Funk Orchestra held a moment of silence for a Redwind Casino crowd last night and will do the same again tonight. Former band mates From Fade 2 Black are performing at The Wild Rover tonight. It will no doubt be a very emotional show.  In addition, there is a memorial and official tribute show that will be coming up soon. Seattle Music Insider sends our prayers and condolences to his friends and family.

We last saw Lawrence back in December attending a Furniture Girls show at Neumos. He seemed in good spirits. We spoke of some of the artists he had worked with and his influences. Lawrence was invited to the show by talented rock and funk artist, Reji Lefluerwho sat in with the band and also introduced him to Matt “Dr.” Fink of Prince fame. Lefluer and Fink are friends and have worked together. When Hightower and Fink were introduced there was hope that perhaps the two talented musicians would have the opportunity to work together in the future. It was not to be.

You may visit is Facebook page to read some of the great tributes from those who knew and loved him.

Lawrence Hightower was born May 1st, 1969. He started playing in his hometown of Detroit. Recording with Jim Vitti at United Sounds Studio A, his musical talent was encouraged by Levi Stubbs Sr. of the Four Tops fame. After playing in local clubs and working with Fred Hammon and Danny Winis in high school, Lawrence toured with Harlque doing P.A.C.A.F. and D.O.D. shows in Japan, the Philippines, Korea, Hong Kong, Hawaii, Guam and Australia. During that time he worked with well known acts including Debarge, Klymaxx, The Mac Band, and Chaka Khan. Shortly there after, he came back to Detroit and worked with a band called Mechnixx. Lawrence has over 20 years of performing experience and a strong vocal ability. For two years, he has been head chair at the Center of Faith Church in Kent, WA. Lawrence is working with local groups doing session work and playing in bands, Funkalicious, Shades and BrickHouse. With his broad repertoire, he has filled in with many local bands on a moments notice and is known for his high energy performances. He owns Hightower Custom which produces custom designed bass guitars. Currently he is working on designing a new bass guitar for Lige Curry of Parliament Funkadelic.

Not only is he a multi-media journalist, he is also an accomplished musician. He is the founder of SMI and drives the creative look, feel and branding for the publication. His years of writing, arranging, and performing live music in a variety of genres inform his ability to communicate the message and the mechanics of music. Roth’s work on SMI reflects his philosophy that music is the universal language, and builds community. He believes it has the power to unite people of every race, religion, gender, and persuasion.
Related ItemsExaminer.comFunkFunkadelicLawrence HightowerP-FunkPaul McCartneyR&B
← Previous Story New Year equals new music
Next Story → It’s Synergia Northwest 2011 week…Full Coverage right here