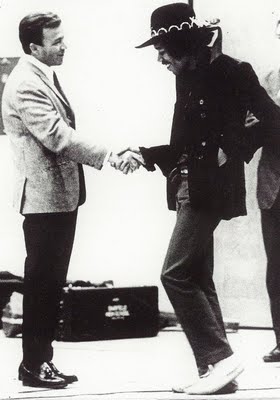 In 1968 guitar legend Jimi Hendrix shook hands with local radio personality, Pat O’Day during a school assembly at Seattle’s Garfield High, to the delight of everyone present. The special moment was captured on celluloid for posterity.  This historic photo will become a life-size statue within the next year to commemorate the two men’s commitment to music education.

The statue is being sculpted by O’Day’s son, Jerry O’Day, Pat’s son and visual artist. A special VIP event took place last month at Gunnar Nordstrom Art Gallery in Bellevue, Washington to introduce the project, and raise money for Music Aid Northwest. You can see photos and join the Facebook page here.

You can hear more about the project by listening to the interview that KOMO News Radio’s Jennifer  Harriman did with Jerry O’Day.

To find out more, or to become a partner or friend of the project,  please visit http://hendrixoday.com

Not only is he a multi-media journalist, he is also an accomplished musician. He is the founder of SMI and drives the creative look, feel and branding for the publication. His years of writing, arranging, and performing live music in a variety of genres inform his ability to communicate the message and the mechanics of music. Roth’s work on SMI reflects his philosophy that music is the universal language, and builds community. He believes it has the power to unite people of every race, religion, gender, and persuasion.
Related ItemsJennifer HarrimanJerry O'DayJimi HendrixMusic Aid NorthwestPat O'Day
← Previous Story SMI Radio Ep. 25 On Demand: EQC Taste of Tacoma Special
Next Story → SMI Radio Ep. 26 On Demand: Queensryche guitarist Michael Wilton