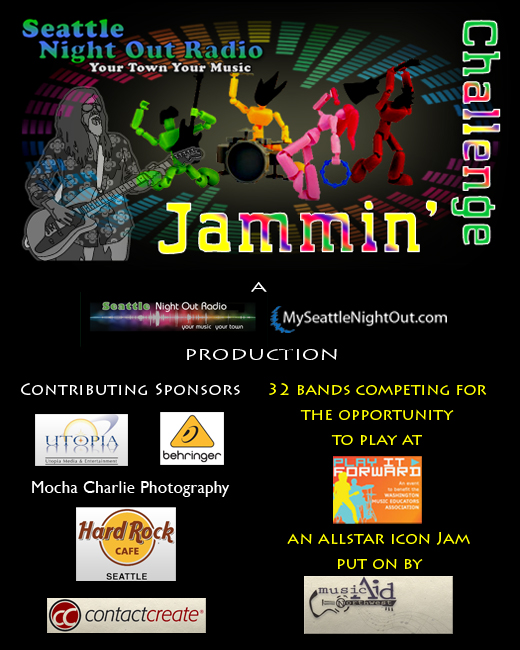 Over the course of the last few months, Night Out Radio has been giving local talent to strut their stuff and show what they go by hosting an American Idol type music contest at Seattle’s Hard Rock Cafe. The competition was open to both bands and solo artists. It all comes down to tonight’s finals as Four Seattle area groups, Verlee For Ranson, Global Heat, Say Banzai, and Julia Massey and the Five Finger Discount, compete for prizes donated by local companies.

Prizes include: a two day recording session at Contact Create Studios with Bubba Jones,a photo shoot with Mocha Charlie, a profesional video shoot from Utopia Media, and a surprize gift from Behringer.

I had the opportunity to judge one of the semi final rounds. This is an amazing collection of talent and should make for a fun and exciting evening.

To read more go here.  or click the link below…

Not only is he a multi-media journalist, he is also an accomplished musician. He is the founder of SMI and drives the creative look, feel and branding for the publication. His years of writing, arranging, and performing live music in a variety of genres inform his ability to communicate the message and the mechanics of music. Roth’s work on SMI reflects his philosophy that music is the universal language, and builds community. He believes it has the power to unite people of every race, religion, gender, and persuasion.
Related ItemsHard Rock CafeJammin ChallengeNight Out RadioSeattle Live MusicSeattle Music
← Previous Story Bumbershoot Turkey Day Insider Deal and Holiday Ticket Sale
Next Story → Roger Fisher and Friends keep “Love Alive” during the holiday season (Video)