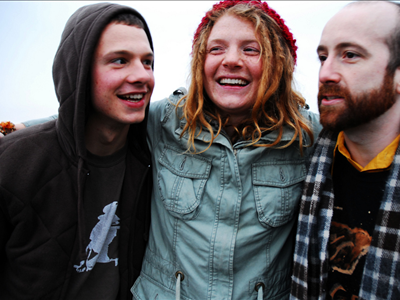 They had and impressive showing in the semi-final and final round at the My Seattle Night Out Jammin’ Challenge. (check out the photos from that gig  from Mocha Charlie here)

The quirky, original, and amazing trio, Julia Massey & The 5 Finger Discount  are poised to do great things in the Pacific Northwest and beyond. The band has a show coming up at Conor Byrne Pub in Ballard this Friday, December 23rd and other dates coming up after the first of the year.

Ms. Massey has been very busy during the holiday season but I was able to catch up with her via phone to talk about the band, their eclectic blend of music and other interesting stuff. I will also feature some music from their most recent record, “Is There Room For Me.”

Also, on this week’s show I catch up with RockStar Motel’s Lucca Sacchetti to get a progress report on his social networking music venture. Lucca was a guest on SMI Radio back in October when his new venture was just launched into Beta. The site is going through some interesting changes and there will be exciting things happening in 2012.

You can read my article that I wrote on examiner.com

RockStar Motel is now open for check in

In addition, you can access the October SMI Radio interview here.

Not only is he a multi-media journalist, he is also an accomplished musician. He is the founder of SMI and drives the creative look, feel and branding for the publication. His years of writing, arranging, and performing live music in a variety of genres inform his ability to communicate the message and the mechanics of music. Roth’s work on SMI reflects his philosophy that music is the universal language, and builds community. He believes it has the power to unite people of every race, religion, gender, and persuasion.
Related ItemsJulia Massey & The Five Finger DiscountLucca SacchettiRockStar MotelSeattle MusicSocial Media
← Previous Story SMI Radio Ep. 42 On Demand: Ravenna Woods
Next Story → SMI Radio Ep. 44 On Demand: Kate Lynne Logan / Ian McFeron