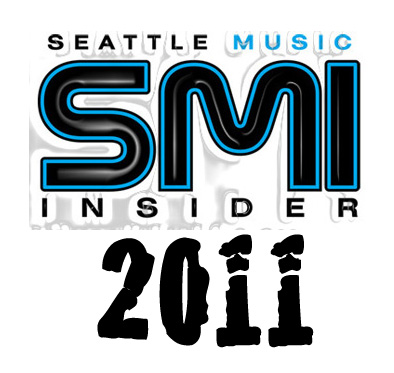 There are not enough hours in the day to consume the steady diet of great music from talented artists and see these artists in person. I did my best here to bring you some of the best of the Northwest throughout the year. Every single event or artist that I met was incredible and significant. Below are some musical highlights for me. That said, I invite you to browse around the site and pick out what is important to YOU.

2011 was an awesome year for music indeed. SMI Radio can now be heard on two powerhouse Internet radio stations in the market. NWCZ Radio and My Seattle Night Out Radio. To Darrell Fortune of NWCZ and Mark and Linda Gordon from Night Out / Wave Radio, I thank you for your partnership and support and having SMI Radio on your stations. I an honored and privileged to partner with you in bringing the best of the Northwest to the masses and shining the spotlight on some of the best and brightest talent east of the Mississippi.

To those of you that listen thank you for your support of not only SMI but the other shows and content on those respective stations. You can listen and / or download past episodes of SMI Radio  from 2011 here.

Next year  will even be a bigger year for Pacific Northwest music and Seattle Music Insider. I will have some exciting things to announce to you regarding SMI Radio in the new year.

I had the opportunity see and hear and interview emerging artists such as: Cody Beebe & The Crooks, Perry Acker,  Pickwick,  Ravenna Woods, The BGP,  Carson and Tess Henley,  Portugal The Man, Tyrannosaurus Grace, Kate Lynne Logan, Julia Massey & The 5 Finger Discount  and Hot Bodies In Motion, to name a few.

I can’t say this enough but again, I want to thank each and everyone of you for your support of Seattle Music Insider and SMI Radio. Most importantly, I want to take a moment to thank you for supporting local music and the artists that bring you their music. Our city, our region has some of the most talented artists in the world. I may be a bit biased but I cannot think of a better market in which to cover music.

Without great music and artists that create it, I have nothing to write and talk about and Seattle Music Insider would have no reason to exist. You and the music make my life richer indeed.

This was more than just a music entertainment event. It was a musical and spiritual experience. Synergia 2011 featured performances by Alan White of Yes and his band White, Queensryche, John Popper and Brendan Hill from Blues Traveler, Shawn Smith and more. Monies raised for the event went to benefit a cause that I am passionate about, Music Matters.  2012 will be even more even more ambitious, as Synergia Northwest presents Music Matters “Live” at The Paramount, Sautrday, May 12.

You can read more about it here or read my review on examiner.com below. Also, you can hear my SMI Radio, post event special by clicking the link below or downloading to your mobile device.

It was a lot of fun driving over the eastern side of the mountains this past May to catch some of the Sasquatch Festival. Seeing Fitz and the Tantrums go from playing in front of a few hundred at The Crocodile the previous November and then in front of 15,000 at the beautiful gorge was truly a delight. You can read more about it here and check out my review on examiner.com…

Local artist Vicci Martinez became a household name thanks to her stirring performances on NBC’s The Voice. I caught up with Vicci backstage at Jazzbones a few days prior to her flying down to Los Angeles for the live finals. You can listen to the interview below. Vicci is destined to do even greater thins in 2012.

I wrote the following piece on examiner.com…

Colin Hanks and his forthcoming documentary, “All Things Must Pass”

Anybody that grew up in the 70’s 80’s and 90’s has to remember their trek to their local Tower Records store. Tower Records was a mecca for music lovers all over the world. Actor, director and producer Colin Hanks is a music lover and grew up in the town of Sacramento, home of the very first Tower Records. Colin with the help of several hundred music fans raised over $90,000 on Kickstarter.com to help get this move made. SMI is a proud backer of this project. It was great talking with Colin about this project and his passion for music. I can’t wait to see the movie and attend the premier in the future.

You can hear the full SMI Radio interview with Colin below and read the piece that I wrote on examiner.com…

Colin Hanks documentary about Tower Records will be labor of love

Bumbershoot may have been a bit scaled down in terms of mega star power but the thousands that attended the three day festival. Unlike Bumbershoot 2010, no umbrellas were needed. It was some of the best Bumbershoot weather in recent memory. Macklemore, Shabazz Palaces, Fitz and The Tantrums, Das Racist, Pickwick and a number of other great acts provided some wonderful musical highlights. I had the opportunity to interview folks like John Fisher and Shawn Stewart (KMTT), Urge Overkill, Phantogram and revered music critic Gene Stout  You can see my coverage by going here. Also, you can hear interviews with some of the artists and music folks that I covered this past Labor Day weekend.

My interview with keyboardist Geoff Downes, (The Buggles, Asia and Yes) The day of the 30 year anniversary of MTV. The first song played on the network was “Video Killed The Radio Star” Geoff played on the track along with legendary producer, Trevor Horn.

Blues Traveler John Popper and Lee Oskar  from War and The Lowrider Band are two of the greatest harmonica players in the world. The two harmonica virtuosos got together to play for the first time and created magic on stage. You can read about it and hear my backstage interview with them by clicking the below link.

Speaking of virtuosos, longtime Peter Gabriel and King Crimson bassist Tony Levin got together with Adrian Belew (Frank Zappa, Talking Heads, King Crimson, David Bowie, Nine Inch Nails) in October for one of the most mind blowing shows that I have ever seen.

Not only is he a multi-media journalist, he is also an accomplished musician. He is the founder of SMI and drives the creative look, feel and branding for the publication. His years of writing, arranging, and performing live music in a variety of genres inform his ability to communicate the message and the mechanics of music. Roth’s work on SMI reflects his philosophy that music is the universal language, and builds community. He believes it has the power to unite people of every race, religion, gender, and persuasion.
Related ItemsAdrian BelewAlan WhiteBumbershootColin HanksExaminer.comJohn PopperLee OskarNWCZ RadioSeattle Live MusicSeattle MusicSeattle Music InsiderSMI RadioStick MenSynergia NorthwestThe Triple DoorTony LevinVicci MartinezYes
← Previous Story SMI Radio Ep. 44 On Demand: Kate Lynne Logan / Ian McFeron
Next Story → SMI Radio Ep.45 On Demand: Kristen Ward / Michael McMorrow (Synergia NW) / John Maynard